Jeff Scroggins & Colorado: Over the Line and Across the Divides 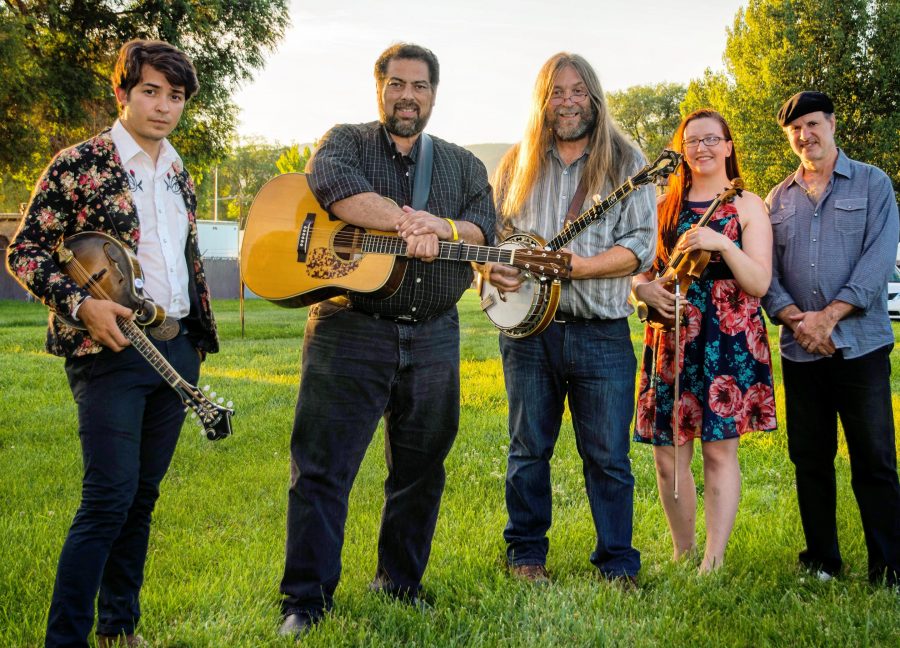 Bluegrass is barely older than rock and roll, but it’s a lot smaller. The problems that small size can engender are obvious, but there’s also a bright side, where a fan seeking to understand how the music has grown can more quickly see musical lineages, trends, and tendencies — for the same reason it’s easier to see the trees in a sparser forest. Even today, the influences of most artists are pretty easy to trace, no matter how creatively they’re built upon.

So it is with Jeff Scroggins & Colorado, whose new release, Over The Line, offers a delicious update of one long-running bluegrass strand. Produced by the band’s occasional bass player, Mark Schatz, Over The Line’s folk-leaning material gets a treatment that isn’t afraid to invite comparisons with the sounds of the Country Gentlemen, a group that navigated its way through the bluegrass and folk revival scenes of the late ‘50s and ‘60s (and beyond) so successfully that they were inducted into the Bluegrass Music Hall of Fame years ago.

Even so, the pronounced individuality and musicianship of banjo man Scroggins and each of his band members (Greg Blake, guitar; Ellie Hakanson, fiddle; Tristan Scroggins, mandolin) ensures that the sound is fresh and unique — and it’s that sort of double vision, where you can see at one glance how these artists relate to those who came before and what new, distinctive things they’re bringing, that is one of bluegrass music’s most endearing characteristics. In that respect alone, the album is a triumph.

Another consequence of bluegrass’s small scale is the persistence of geographical variety. I’m not talking about bogus efforts to claim that only those from a certain area have the capacity to play “real” bluegrass, but rather about variations that range from the attitudinal to the climatic to the economic, all of which combine to make the experience of bluegrass surprisingly different from one part of the country to another — most broadly, from east of the Great Plains to the Front Range and points west.

Whether for cultural, economic or musical reasons, there are plenty of bands that stay on their own side of the divide, so although he’s been a staple of the western scene for a long time, Jeff Scroggins’ name is just now starting to ring in the ears of the rest of the country. With that in mind, gathering a little background seemed like a good way to start our conversation.

I suspect that for a fair number of readers, this is probably the first time that they’ve heard much about you and the band, so let me jump back to the beginning — you’re a westerner by birth?

I was born in Oklahoma, I suppose that’s pretty far west.

It is from the Nashville perspective! How did you come across bluegrass music?

Probably the first time I heard it was when my parents would take me on little vacations in the Ozarks; I didn’t know anything about it, but I always liked it. And then, when I was 20, I bought a banjo at a garage sale. I was playing heavy metal music at the time — but six months later, I liked it so much I sold my Les Paul and my Marshall amp and bought a better banjo. So that kind of ended my rock and roll career.

So how’d you learn to play?

The guy who had always been my music store guy, he was a bluegrass guy. So when I brought the banjo in, he kind of fixed it up a little, and he sold me the Earl Scruggs instructional book and record, and he sold me a Peter Wernick book and a Tony Trischka book, and I went home and started figuring it out. Then a couple of years later, I ran into Alan Munde, who was teaching lessons in a music store in Norman, Oklahoma, which was about 20 minutes from where I lived. That was my real first serious connection to bluegrass, seeing him do it correctly.

I started playing in some local bands, around where I grew up, and I ended up moving to Irving, Texas, to be in a band — which was short-lived. But I moved into the Dallas area, and it was an amazing scene for a short time there. There were a lot of people who were really good who were all there at once; I was seeing people like Brad Davis and Greg Davis, Scott Vestal — in fact, I replaced Scott Vestal in a little family band. And that was sort of my learning, going there and being around a lot of people who did that; I was learning it all as I went.

And you’re a contest winner, too, right?

I grew up in Oklahoma, but it wasn’t that far to Winfield, Kansas. I started going to the big festival there, and decided I wanted to win that banjo contest — and I did, and won a bunch more along the way.

Well, it certainly is different. For me, I watched the contest, and I tried to figure out what I needed to do to win the contest. I think the most important thing is to be a good Scruggs style player, because if you’re not doing that, I don’t think the rest of it is going to help you much in a contest, honestly. So I really focused on that, and I also tried to get the melodic and single-string; I specifically started getting the single-string stuff because people who were winning contests were doing that.

But yeah, I think when you’re doing contests…I was recording everything every few days and listening to it, and just trying to really perfect these tunes. And it ends up being reasonable training for doing the other thing, but it is certainly different. I felt like I developed the techniques I was going to need to play bluegrass, but I didn’t really know how to do that.

People who have played a lot of contests have told me that there, it’s all about you and not much else, but in a band, you’re playing backup. You learn that the space you make for other people is at least as important as what you’re doing — that it’s a real mental adjustment to not be the center of attention.

I found for myself that I didn’t really want to be the center of attention. I was pretty shy. And to this day, if people compliment me on my backup playing, it’s sort of the thing that makes me the happiest. Because I figured out a long time ago, that’s what you’re going to be doing 90 percent of the time. So I decided that if I was going to do it 90 percent of the time, I was going to try to get really good at it. And obviously that really is one of the main differences, is learning how to work without the ball, as they say in sports.

I think I first saw your name with the Blue Canyon Boys. Was that the last thing you did before you got Colorado started?

It was. I was getting divorced, and coming to Colorado, and I was looking for some sort of musical thing to do. That was the thing that fell in my lap. I had known the bass player for a long time — in fact, he went back to my Texas days — so it was based on friendship. I didn’t necessarily feel that it was an awesome fit for me, but they were looking for a banjo player and I was looking for a band, and so I did it for a few years. And by then, Tristan — he was 14 at the time — was becoming pretty amazing, so we decided to start a band.

Who else did you have in the band?

Greg Blake, Tristan and I were the founding core. And then we had Annie Savage playing fiddle, and a guy playing bass who had a business, and he was the first one to bail when it started to get busy. It’s funny, we’ve had one banjo player; one guitar player; one mandolin player; three fiddle players and 37 bass players.

How did you meet Greg?

I met him in 2011, at a mutual friend’s wedding where he was doing the music. The reception was a bluegrass jam, and we jammed for seven hours until they threw us out of the place. Sort of played every song we knew. At the end of the night, I said, “I’m starting a band, and I think you should join it.”

So you’ve been working pretty hard since then, putting four albums out.

I had written out a business plan, and written goals five years before this, when I first decided I was going to get serious about this. I had a very specific idea of what I wanted to accomplish, and so when I asked people to join the band, I just handed them these pages and said, “Read this, and if it seems like something you’d like to do, then join this band.” But I was out of work and looking for a way to make a living. I had applied for a million jobs, and none of them came through, and I took that as a sign from somewhere that I was going to do this. So when we started, I started out immediately trying to make it pretty serious, and within a couple of years we were working full-time.

When I was younger, I hadn’t been very smart about it; I’d never thought about doing that sort of thing, so I never tried to make a lot of connections with promoters. But over the few years that I was playing with the Blue Canyon Boys, I made connections and kept them. I also had a lot of older connections, too. When I had been younger, I’d been in a lot of bands, but I’d never called in all the favors I’d had, because I figured that at some point I was going to have a project that I was going to pull out all the stops on. So I called everything in all at once, and that got us working really fast.