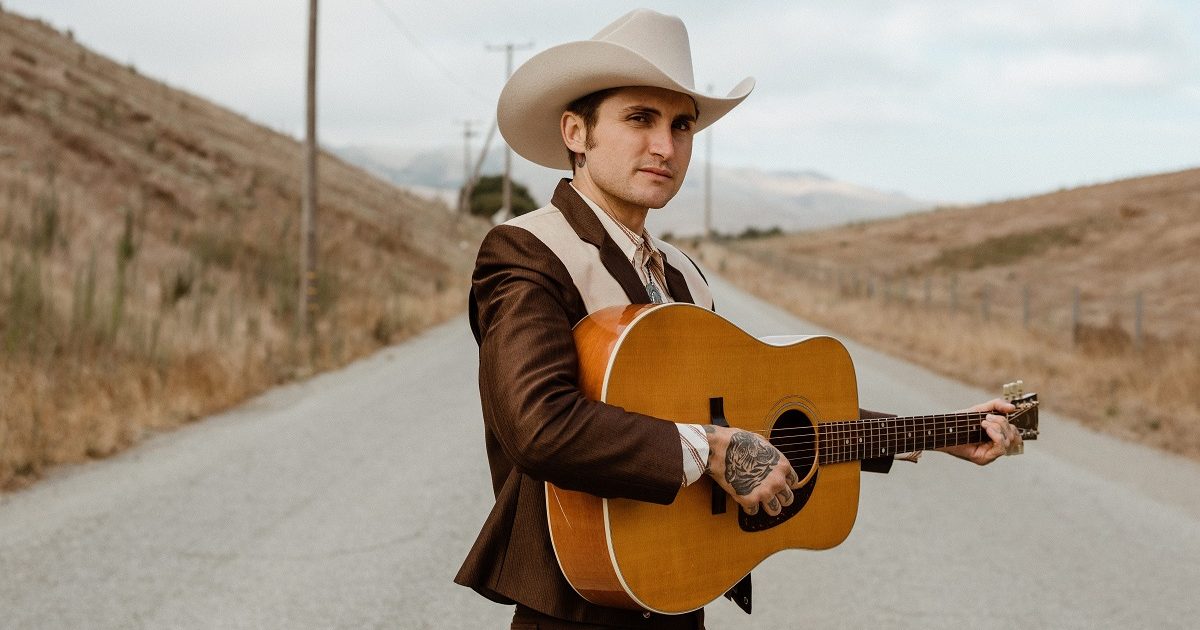 To quote the title of his new album, Jesse Daniel is indeed rollin’ on, moving past the setbacks of his past and now celebrating three years sober. One thing that hasn’t changed? His dedication to classic country music. With its echoes of Buck Owens, Ray Price, and other legends of the ‘50s, Rollin’ On simply extends the traditional country sound Daniel explored on his self-titled debut album in 2018. He recorded it in San Antonio with producer Tommy Detamore.

“I’ve been telling people that the record I did before was songs that I had written over a period of years that dealt with a lot of past stuff,” he says. “This one has some of that, but it’s a lot more about moving forward, and to me, even physically driving, moving forward. It’s symbolic of that. I think it naturally fell into place with the theme of this record.”

That drive is evident in “Tar Snakes,” “The Mayo and the Mustard,” and the rousing title track. He knows something about mileage, too. Raised in a rural mountain town near Santa Cruz, California, and now living in Austin, Texas, Daniel caught up with BGS during a tour stop in Nashville.

BGS: I hear a positive attitude coming through several of these songs, like “If You Ain’t Happy Now (You Never Will Be)” as an example. Do you consider yourself an optimist, or in a pretty good place these days?

JD: Yeah, definitely. I’ve been a pessimist before in my life. I know what that’s like, but at this point, yeah, I definitely consider myself an optimist. And that song, it’s funny, the title of the song might seem almost like a slam on someone or something. When you listen to the lyrics, I wrote that song as a reminder to myself. You could have everything in the world and still be miserable if you’re not focusing on the here and now and what matters.

At what point did you begin to write songs?

I’ve been writing songs and short stories since I was a young kid in elementary school, and I would always write wild stories. You know, I had a crazy imagination as a kid, and then I got into punk rock when I was in my teen years. And country songwriting and writing in this style started as a cathartic thing because I always loved country music, but it naturally progressed.

How do you progress from punk to country? How did that happen?

I’ve seen there’s a common thread. I’ve talked to a lot of other musicians who play country music now that were into punk rock, and I think that there’s something about the spirit of it that was similar, that called me to it. …For me, I was introduced when I was really young to Buck Owens and Hank Williams and guys like that, and I always loved that music. There’s a lot of older punk rock guys that I knew that were listening to Black Flag and things like that. But they were also listening to old Hank Williams records. I got influenced by that. To me, it was almost the turning point, a maturity thing. I didn’t feel quite as angry, and even if I was, I wanted to do something constructive about it. And that, to me, was a more constructive form of expression.

Do you remember when you wrote your first country song you liked?

Mm-hmm [Affirmative]. I had been writing for a while and none of them really got completely finished. They were all ideas and things that turned into other things later on. But the first one that I finished that I remember liking was a song called “Don’t Push Your Luck.” I wrote that in a hospital bed in a rehabilitation center in Oakland, California. I was going through a lot of rough times in my life, and that was the head of everything where I decided to really start pouring myself into that. That was the first country song I was ever really proud of.

Was there a turning point where you got healthy or decided to take care of yourself?

Definitely, yeah. There was a guy who was in that program, and he worked there, and he’d come in and play guitar for us. I was sick for about a week detoxing, and I would hear him playing guitar in the other room. He’d come in playing Hank Williams songs and Emmylou Harris and all kinds of classic country songs. I went in and talked to him when I started feeling good enough to get up and walk around. I remember I said, “Man, I want to play music like you someday and do what you’re doing and play country music.” And he was like, “Why don’t you?” And he said it matter-of-fact, just like that. It really stuck with me and I always looked at that as a big turning point when he said that.

So I was sitting at a diner in Austin the other day, and I see this guy walk by, and I knew it was that guy, looked just like him. So I chased him down the street and it turned out that was the guy who told me that. He lives in Austin now, and I told him, “You changed my life, man. You really set this whole thing that I’m doing in motion.” And he is actually a musician and he’s going to sit in with us, hopefully, coming up at a couple of our shows. Pretty crazy twist of fate.

The musicianship on this record is really good. You and Tommy must’ve gotten along pretty well. What do you like about working with somebody a few generations older than you?

I’ve always had an affinity for older people and picking people’s brains, and I figured that it’s life experience. There’s something I can usually learn from those people, and with Tommy, that was definitely the case. He was full of stories and wisdom and experience. So yeah, working with him, with his age and experience, was awesome. Not to say that somebody younger wouldn’t have been great, too. My partner Jodi always jokes around that I will go someplace, and I’ll find the nearest 89-year-old person, and I’ll latch onto them. We’ll be hanging out and catching up.

Are you a bluegrass fan?

Tell me about how you discovered bluegrass music.

Oh, man. Actually there’s a lot of bluegrass where I grew up, up in the mountains and stuff, and there’s tons of players. But I first got my hands on a bluegrass compilation from a teacher I had, and she had a bunch of burned CDs. And one of them was a bluegrass mix. I remember she put it on one day, and my ears perked up. I was like, “I love that.” And it was Flatt & Scruggs, or something like that. I ended up borrowing it from her and taking it home and listening to it. I didn’t even know who all the artists were, but that was my intro to bluegrass. And then, over the years, I got exposed to it a lot growing up there.

How did you learn about who the artists were? Did you just start buying records?

Yeah, exactly. Buying records and finding records. I used to shop in the bargain bins a lot, and they had a bargain bluegrass section and country section at the local record shop. So I’d find a lot of stuff there. A lot of the guys that I’ve had in my bands over the years have also been bluegrass players. They’ve introduced me to a lot of that stuff. There’s also a really big old-time scene in Santa Cruz, so there’s an overlap with the old-time and bluegrass.

“Son of the San Lorenzo” is a neat way to close the record. It seems like a very personal song. What was on your mind when you were writing that?

“Son of the San Lorenzo” was really autobiographical. More than any of the other ones on the record, I think that is the most about myself and where I grew up in the San Lorenzo Valley. I didn’t mention it in the song outright, but I’ve had a lot of friends that I grew up with from that area pass away in the last four or five years. There’s a whole lot of drugs in that area, and that song was about leaving that area and leaving not those people, but those issues and past things behind. I’m glad that was the last one on the record, too. That’s why we put it there. It’s like a cathartic, moving forward type of thing.