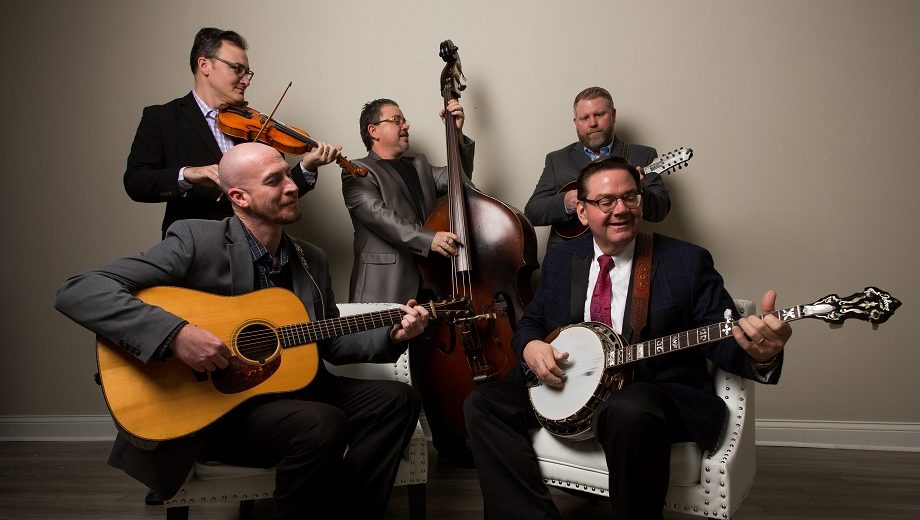 For the record, Joe Mullins is a cornerstone of the modern bluegrass community. He’s chairman of the International Bluegrass Music Association, as well as a radio station owner and an award-winning musician. Plus he’s just an easy guy to talk to. During a visit with the Bluegrass Situation, Mullins traced his decades-long career, from teenage gigs to For the Record, his latest album with the Radio Ramblers, featuring Jason Barie on fiddle, Mike Terry on mandolin and vocals, Duane Sparks on guitar and vocals, and Randy Barnes on upright bass and vocals.

BGS: Did you go into these latest sessions with a certain sound or musical direction in mind?

Mullins: We had three or four new songs that we wanted to do, and wanted to make those our own. I try to make certain that when we combine rare tunes that we want to cover with new songs, that we get the perfect balance of a variety of vocal and instrumental arrangements. I don’t like the same ol’, same ol’. We’re fortunate in the band to have so much vocal versatility. There are three of us that can sing any part, plus a bass singer if we want to do a quartet number. So, I make certain there’s a good balance vocal arrangements, keys, tempos, subject matter… If you listen to all 12 songs in a row, I don’t want you to get bored and go to sleep.

That’s harder than it sounds.

It is! Especially when you combine original material with some rare tunes that you want to cover, and that you want your audience to hear. I always find a few of those. We’re called the Radio Ramblers because I have been on radio and on stage since ’82. I was 16 the first time I played a major bluegrass event as a banjo player, the same year I started in broadcasting. So I’ve got a real deep well to draw from, everything from old-time stuff to contemporary country, classic country, Americana music, and everything bluegrass. On this new album, we’re covering a Johnny Cash/Hank Jr. tune (“That Old Wheel”), and doing new songs, and something from a hundred years ago, out of a hymnbook. So there’s a little bit of everything.

I’ve heard you talk before about the bluegrass history in Southwestern Ohio, and you made a reference to Sonny Osborne and J.D. Crowe as being mentors to you. What was that relationship like?

My dad was a broadcaster and a good bluegrass fiddle player. He was in and out of bands. He sat in with the Osborne Brothers a bunch when I was a kid. He sat in with J.D. Crowe when Doyle Lawson and J.D. had the Kentucky Mountain Boys going. He was on a ton of recording sessions in the ‘60s and ‘70s with a variety of bands. In Southwestern Ohio, the Cincinnati/Dayton region, it’s just thick with bluegrass history. Everybody from Flatt & Scruggs to the Stanley Brothers — they all recorded in this area at one time or another. Larry Sparks started here and grew up here.

The Osborne Brothers started here. Their parents had left Kentucky to get a job in Dayton, Ohio, when they were boys. Bobby and Sonny started their career right here in the same neighborhood where the Radio Ramblers started. They started in the late ‘40s, early ‘50s, and we started in the early 2000s. Matter of fact, Bobby started singing on the radio in Middletown, Ohio, in 1949 — the same station my dad started working at in 1964, and the same station I started working at in 1983. So there’s just a lot of connection there.

The Osborne Brothers and J.D. Crowe and Ralph Stanley and Don Reno — all these first-generation bluegrass leaders were all family friends. They were in and out of the house when I was a kid. My mom fixed breakfast or supper for everybody I just mentioned, multiple times. Dad sat in with them and played on Larry Sparks’ first record, and played on all kinds of recordings in the area. I saw these guys growing up a lot.

So when I decided to attempt the five-string banjo, I had seen J.D. Crowe and Sonny Osborne and Ralph Stanley in their prime, multiple times, and had all the recordings already in my bedroom. Then, when it came to me pretty naturally, and I had the opportunity to play and perform and record as a young guy, if I was having a struggle with something, I always had access to J.D. Crowe or Sonny Osborne or Don Reno or Ralph Stanley. “How do you do this?” “How do you that?” I got to see them often and I got some one-on-one time with all of them.

Did that strike you as amazing at the time? Or was it later in life that you realized how incredible that was?

Later in life I realized I am the most blessed guy in the world. The most fortunate cat, you know? To be 15 or 16 years old, trying to learn how to play banjo, and have access to these guys always – and get to be encouraged by them, and sing by them… Sonny especially, he would lecture about all kinds of stuff besides banjo playing. “Make sure you go to college! Quit smokin’!” That’s just who he is. We still talk often and I play one of his banjos on this record. He’s had custom banjos built and designed for many years and I’ve had one of them for the last six years.

I wanted to ask about your dad and touring with the Traditional Grass. Was he easy to travel with?

Not always. [Laughs] I often look back on the Traditional Grass – we had it going on in the late ‘80s and early ‘90s. We had a ball! We were on the road all the time and back then it was just wide open. Us, the Del McCoury Band, the Bluegrass Cardinals, the Lost & Found Band — and the first generation guys were still out there. We saw the Osborne Brothers, Ralph Stanley, and Jim & Jesse all the time.

I was real young and I look back on it now a ton, because Dad was my age then. He still was a pretty hard-charger. All the other guys in the band were young and it didn’t matter how late the show was, or how long the party went on, he hung in there with us. [Laughs] He wasn’t really hard to get along with. He just got tired and cantankerous sooner than all of us young cats did, I guess. But he didn’t worry about details. He worried the most about playing great music and having a good time.

In the ‘90s, you were pretty visible with Longview, too.

Very fortunate. Worked out great. Traditional Grass toured like crazy in the early ‘90s. We burned it up from ’89 to about ’95. I about burned myself out and burned myself up, just living hard on the road. I was very fortunate to have an opportunity to buy a local radio station here in this wonderfully historic bluegrass neighborhood in Southwestern Ohio.

The Longview thing was already in the works before I came off the road with the Traditional Grass. We started conversations around ’94. I was on the road with that band through the summer of ’95 and launched my first radio station as an owner in the summer of ’95. And Longview recorded first in December of ’95, so by the time the album came out, there was a good buzz with it and it was an immediate success. And we had to go out and tour part-time.

So I had just enough time to get my radio business started and established without a heavy tour schedule. And then I had this wonderful, high-profile gig as a special event recording band that also got to tour and play everything from MerleFest to Wintergrass, from Telluride to Myrtle Beach. We played everywhere as a special event band in the late ‘90s and it kept me from falling off the radar.

If you look back on the late ‘70s when you were developing, to now, where you’re thriving in a lot of different areas, so many things have changed in bluegrass. But what would you say has been a consistent thread from those days until now?

The simplicity of that part of it — for my band and the sound we look for — it hasn’t changed. It hasn’t changed from the original formula that Monroe and the Stanleys and the Osbornes and all of ‘em have put on stage since the ‘40s and the ‘50s. It’s still got to be players that are masters at the craft. It’s still a combination of art, entertainment, and blood, sweat and tears. That’s bluegrass.