Joe Pug: From Family Roots to ‘The Flood in Color’ 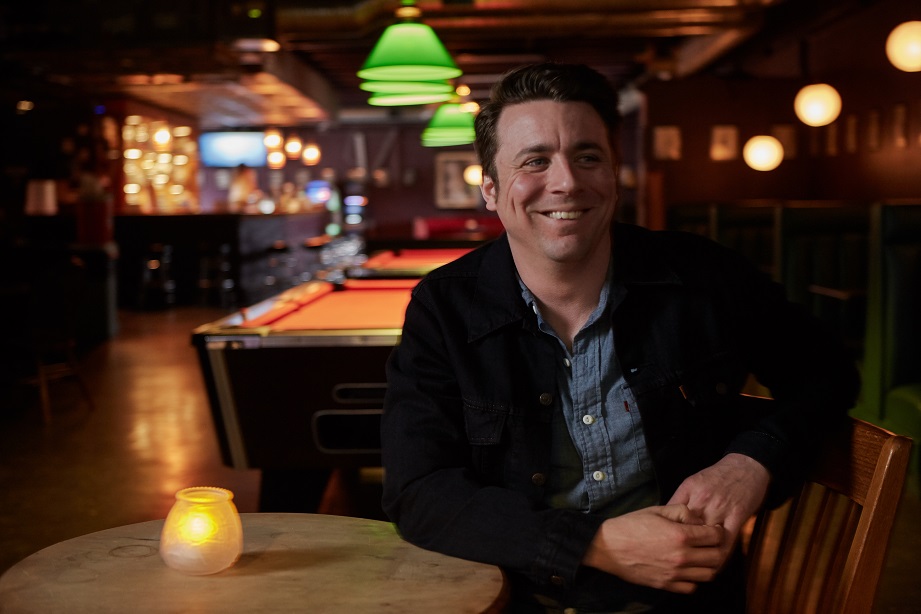 Joe Pug rises to the occasion on The Flood in Color, his first new album in four years. Recorded in Nashville with lightly textured production from Kenneth Pattengale of the Milk Carton Kids, the quiet collection conveys a man willing to look back on his life. Meanwhile, Pug relocated from Austin, Texas, back to his home turf in Maryland, and started a family. The Flood in Color is not filled with songs about domesticity, however. Instead, there’s a folk flair – and occasionally a topical perspective – that Pug’s longtime fans will immediately embrace. So will listeners of his podcast, “The Working Songwriter.”

Corresponding by email, Joe Pug answered these questions for The Bluegrass Situation.

BGS: This album feels like a body of work that’s intended to be taken as a whole. Do you see it that way as well?

Pug: Yes. There’s been a decade of talk about how the album is dead, about how everyone is going to switch to putting out singles willy-nilly, about how the format for an album was just a consequence of a vinyl record’s physical limitations. And fair enough. Maybe when my kids come of age and Spotify is the only thing they’ve ever known, that will be the case.

But for the time being, you have a whole generation of artists who grew up with that format and who still conceive their creative works within its boundaries. More importantly, you have a generation of listeners who are expecting and desiring to hear songs in that format. So I did intend for these songs to be heard together, and heard in the order that they’ve been sequenced.

In the song “Exit,” there’s a reference to a highway west of Davenport and Kansas – that’s an interesting choice for a lyric. What sort of imagery does that line bring to you?

There was a period of time in my early 20s when I was living in Chicago and working 9 to 5 during the week as a carpenter. At night, I would play open mics in the city. And on the weekend, I would self-book these mini tours across the Midwest. They’d go through Sioux Falls, Des Moines, Eau Claire, and Maumee, Illinois. The imagery in this song comes from that time when I was young, on the road in America, completely alone, close to broke.

It was a completely insane idea. It was like going over the entirety of our huge country with a magnifying glass. In fact, when I’d get pulled over by cops for speeding and they’d ask why I was in their small town at 2 in the morning, they would never believe that I had left Chicago to play some hole-in-the-wall in their town. To their credit, they were right, it made no sense.

Why did The Flood in Color fit well as an album title for this particular project?

Very rarely, an idea will come to me in my sleep. Or to put it more specifically, in the very last moment before I drift off to sleep. It’s a cruel joke. I will have been working on some damned terrible song for hours one day and going to bed empty-handed. And then some completely unrelated idea — a phrase, a lyric, a melody — will suddenly appear in my head as I’m lying prone and waiting for sleep. I have to drag myself out from under the covers and write it down.

“The Flood in Color,” that phrase came to me one night like that. And I knew it was the album title. Right before we went into the studio, I took a swing at writing it as a song. It came out to our liking, so it became the title and the title track.

This record feels intimate and meaningful, especially with the spare production. When you had the final mixes back, who was the first person you played them for? What was the reaction?

I played them for my father. And he really liked them. I know that because I’ve always played him my rough mixes early on, for every album. He never gives me in-depth critiques, but if he doesn’t like something he just keeps his mouth shut. These were the first songs in quite a while where he didn’t keep his mouth shut. I could tell it really moved him.

What is that experience like for you to bring a complete, new song into the world?

My process takes a really long time. From the initial writing, to the editing, to the recording, mixing, mastering, and finally the release. So some of these songs are two years old. I’ve spent countless hours with all of these. So by the time they come out, I feel a strange distance from them. They feel like someone else’s songs to me. And I can finally appreciate them or critique them on their own merits rather than songs I have an intimate connection to.

I understand that you are living in Maryland now. Why is that?

My wife and I started a family three years ago. We’re both from Prince George’s County, Maryland, which is a very special place right outside of DC. We wanted to be around family. Plus if I had spent another two years living outside of Maryland, then I would have spent more years of my life living elsewhere. There was always an internal clock in my head that was ticking towards moving back home. I wanted to go out and see the world, I wanted to do my own small version of Campbell’s hero’s journey. But I also wanted to end up around my family and I wanted my kids to grow up around family.

To me, “The Stranger I’ve Been” feels like a lost treasure of country music. Who are some of the country artists who have shaped your work?

Are you a vinyl collector? If so, what kind of records do you always keep an eye out for?

I am not. Only a vinyl seller. Haha.

On another topic, what are some of the most impactful books you’ve read lately?

Oh man, I’ve got two kids under 3 years old, I’ve taken a pause from my reading regimen. I’ve been using podcasts and audiobooks to fill the gap. Because I can listen to them with what you might call “found time”… driving the car, doing the dishes, mowing the grass, exercising. My favorite podcasts to spend time with are “Hardcore History with Dan Carlin,” “Duncan Trussell Family Hour,” “Henry and Heidi” (with Henry Rollins), and “The Lowe Post” (for basketball).

You have a podcast dedicated to songwriters. What has surprised you the most about that project?

How often songwriters, especially very successful songwriters, think that they’re finished, that they’ll never work again, that they’ll never find another inspiring tune. It’s inspiring on one hand to think that these people I admire have to go through the same tribulations. It’s frightening on the other hand to learn conclusively that there is no final creative plateau that you can reach and just build your house on. You can’t ever stop moving forward because you’ll turn to stone. You have to keep moving forward creatively or time will pass you by. And that is a positively exhausting lesson to learn.

Has there been a common thread among your guests so far?

The show began as only people who were in my phonebook, people that I could get a hold of directly. Now as the show has grown and we’ve had a history of good guests, we’re starting to branch out and pitch the show to bigger artists that I don’t have a personal relationship with.

This is your first album in four years – and it’s a record to be proud of. What are you now looking forward to the most?

For people to hear this damned thing! I don’t know if people will like it or not, but this took everything I had creatively for three years. So I’m at peace with however they feel about it. I happen to really like it, so at this point I’m looking at everything else as gravy.