Mary Chapin Carpenter Walks Us Through ‘The Dirt and the Stars’ 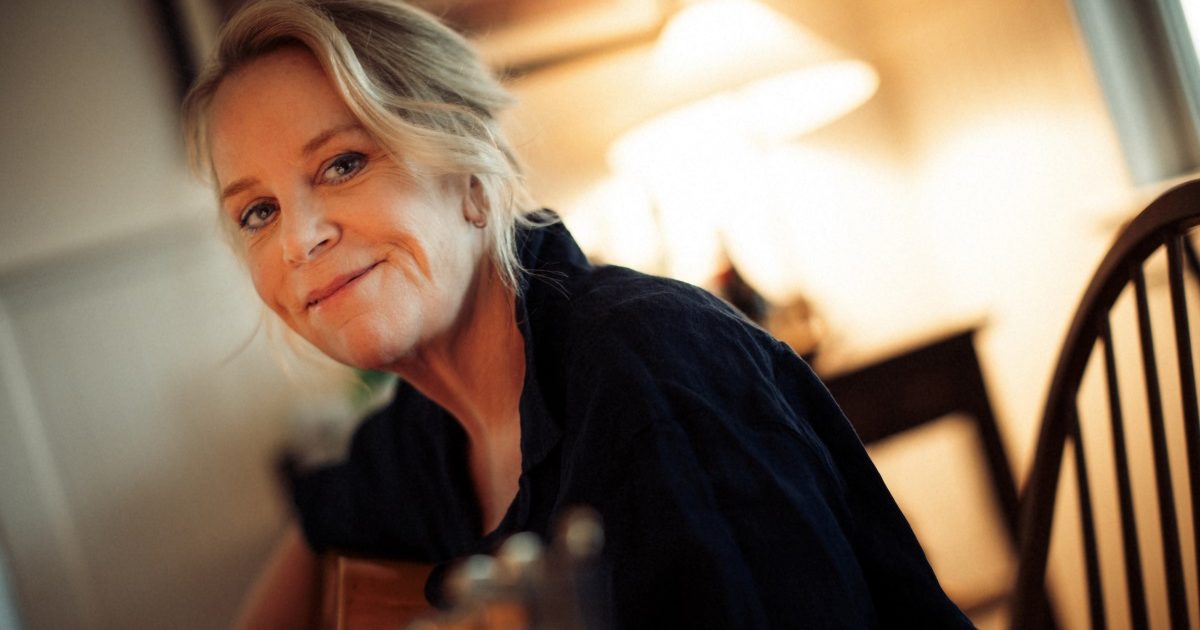 Mary Chapin Carpenter’s fans have got to know her kitchen well since the start of lockdown. It is a beautiful space, often ornamented with bright, round peonies from her garden. It makes you long to be as tidy, and as tasteful, as Mary Chapin Carpenter.

It’s in this kitchen that she records her Songs from Home series. She greets us with the tender familiarity of a family member on a weekly Zoom call. Guitar slung around her neck, she’ll share some snippet of news or wisdom before singing to us from a back catalogue so deep that there’s always something appropriate to the mood of the day. Often there’s an unscripted appearance, even an added harmony, from Angus, her golden retriever, or her cat, White Kitty. It’s less a house concert than a singalong with an old friend.

She’s in her kitchen again as we talk, this time making chicken stock. “I’ve got two enormous pots of chicken bones and carrots and celery boiling on the stove,” she says, and for a moment, it’s like an audience with Julia Child. “I get it started just before noon and then it simmers for about five hours. Just before dinner time I take it off and put it in jars. Then it’s there for whenever I need it.”

I tell her that I’d been wondering, from seeing the immaculate state of her kitchen on her lockdown videos, if she ever cooked at all. “Well, I make sure I clean the dishes out of the sink!” she laughs. “I love to cook. This kitchen is a place where I’m so happy. I wish everybody could come over and hang out!”

She pauses, as the thought strikes her. “These are things that you didn’t even think about, when this all started, about half the things you’d miss. It’s one of the pleasures of my life, feeding people around a table. I miss it so much.”

Carpenter was supposed to have continued her nationwide tour alongside Shawn Colvin this spring, playing songs from her new album, The Dirt and the Stars. With all gigs cancelled, and the travel that usually “balances” her introvert tendencies curtailed, lockdown has been challenging for Carpenter, who lives alone in the Blue Ridge Mountains.

“I’ve been very, very isolated for many months now,” she admits. “It’s a remote rural area, and I don’t need to leave the farm very often except to pick up groceries curbside and use the drive-through drug store. And just like everyone it can be tremendously lonesome and at times very hard, but my reality check at that moment is to remember that so many people are struggling so much more than I am. The minute I start feeling sorry for myself, that’s all I have to think about and I stand up a little straighter.”

After all, Carpenter quickly reminds herself, she is not completely alone — there’s Angus and White Kitty. “And here I am in this beautiful part of the world and I walk every morning for miles, I’m out in nature as much as possible and I really do try to use those elements of my life as meditation and medicine and inspiration.”

Her songwriting walks are a long-established part of her process, although she’s trying not to put pressure on herself to be creative during these extraordinary times. A friend recently phoned her and told her how the various things she’d hoped to accomplish while stuck at home were coming to nought, and how bad it made her feel.

“I said to her, and I think I was saying it to myself at the same time, who among us is going to be accomplished during this time? It’s asking too much. The best you can do in that moment of frustration is to be still and inhale and be kind to yourself.” She catches herself. “I know, it sounds very woo-woo and Oprah-like.”

Carpenter’s new album, recorded in January and February of this year, is arguably the most intimate and autobiographical of her career. But what’s particularly noticeable is the powerful thread of empathy that runs through it, along with a repeated message of tolerance for our fellow humans, all of us carrying our private burdens and flaws. 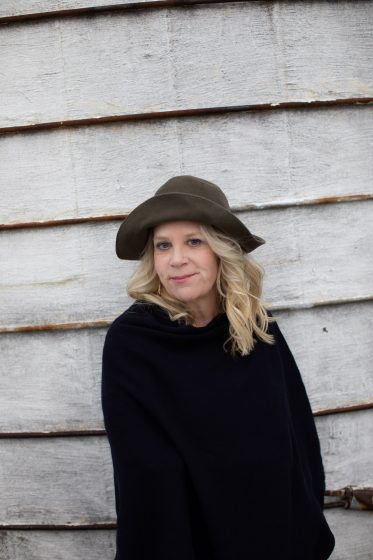 It’s there in the titles: “It’s OK to Be Sad,” “Secret Keepers,” “Everybody’s Got Something.” In “Where the Beauty Is,” she takes the image of kintsugi pottery — “the shattered pieces of a bowl/ Filled and fused with dust and gold” — to illustrate that our brokenness is what makes us beautiful.

The final song of the album, “Farther Along and Further In,” suggests that these discoveries are ones that Carpenter has been making herself: “There’s a crack in the armor, an opening/ My heart seeing out and my eyes see in/ Where they’ve never seen before.” She agrees with the analysis. “It’s like I’m writing about my own experience, but talking to myself at the same moment. And that new reckoning with self has everything to do with growing older, it’s directly connected to that. The wisdom that comes to you with growing older is the sense that you don’t care as much anymore about little things that used to nag at you. You’re able to let them go. You’re able to realise you can find sustenance and comfort and meaning in things you never did before.”

So much of life, she says, is struggling with oneself — wanting to be better, smarter, more accomplished. “It’s as if as you grow older you’re able to shed that somehow and not care as much. That’s the gift of growing older.” Even still, there are things that are hard to share, even in song. In her excellent three-part podcast, recorded with poet Sarah Kay, Carpenter shared the inspiration behind the song, “Secret Keepers” — born of a #MeToo experience in her past — and admitted to Kay that she found it difficult to reveal too much of herself in her work.

There are other difficult, poignant subjects, not least the death of her friend John Jennings, to whom she pays moving tribute in “Old D 35.” Her fellow songwriter and longtime producer passed away five years ago from cancer, aged 61. “We weren’t just musical partners — he was my best friend,” says Carpenter. “He had been my boyfriend years ago and we’d evolved into being oldest friends. I miss him every day — there’s a hole in my life that’s always going to be there.”

The talk of loss brings us to John Prine, who died of Covid-19 in April. “People are experiencing these losses and have been unable in many instances to even be there with their loved one when they pass away. There’s probably nothing crueller. I may be wrong, I’m just guessing, but I think this terrible disease and catastrophe became a lot more real when someone like John died of it. Sometimes things don’t seem quite real until they touch you directly.”

The scale of the pandemic was only just becoming apparent as Carpenter finished mixing the album. She had chosen to return to England, in order to work once again with Ethan Johns, who produced her last album, Sometimes Just the Sky. The West Country, where Johns’ studio is based, is one of the parts of the world Carpenter loves most, and she finds a beautiful symmetry with her own Virginia countryside. “I live in the northern part of the Blue Ridge, where the mountains aren’t so dramatic as North Carolina. It’s gentler hills and pastures and valleys and whenever I’ve spent time in that area in England near Bath, it’s real similar.”

She performed in a show in London before heading home to the growing crisis. “Someone said to me since, ‘You’ll be one of the few people who can say you had a gig in London in 2020!’” Even now, she can’t bear to ponder when her next live gig might be. “If I think about it too much I get really sad.”

It is no surprise to hear her vent her fury with the Trump White House. “This country is burning up because of the absolute abdication of responsibility of the current administration,” she says. “It’s a debacle, and I feel equal parts rage and sadness.” Her political outspokenness has often caused a backlash among parts of her audience — what she calls the “shut up and sing brigade” — and she says she’s still “incredulous” to hear it. “They’re saying that by deciding to be a songwriter or a singer you’re not permitted to have a conscience. I would direct them to Nina Simone, who said it’s an artist’s duty to reflect the times in which we live.”

Her passion for justice, both in her songs and through her support of organizations like the Women’s Refugee Commission, stems partly from the unusually global worldview she received during her childhood. Her father, an executive for the Asian edition of Life magazine, took his family to live in Japan for a couple of years when Carpenter was 11 years old. Her parents, prescient enough to know that they might never have the chance again, brought the children back to the US the long way, travelling through India, Hong Kong, Greece, Italy, and France.

It was, she says, a magical and eye-opening experience, and gave her “an understanding of what is necessary to be a contributing citizen of the world.” She notes, “My parents raised us to always speak out on behalf of people who have less than we do. That’s why it’s such an insult when people condemn artists for speaking out. I always think it’s a great loss when people feel they’re not able to speak their conscience.”

Still, a seam of hope for the future runs through this record, whatever present trials we face. “It’s disappointing to me when people think it’s a sad record – it’s almost as if they hear it and say, ‘There’s a lot of slow songs on here.’ Inherently it’s a record of looking toward the unknown future and believing that’s the best part.”

It’s certainly something she believes, as she return to the “solace and serenity” of the quiet farmland — to Angus, to White Kitty, and to her bubbling chicken stock.