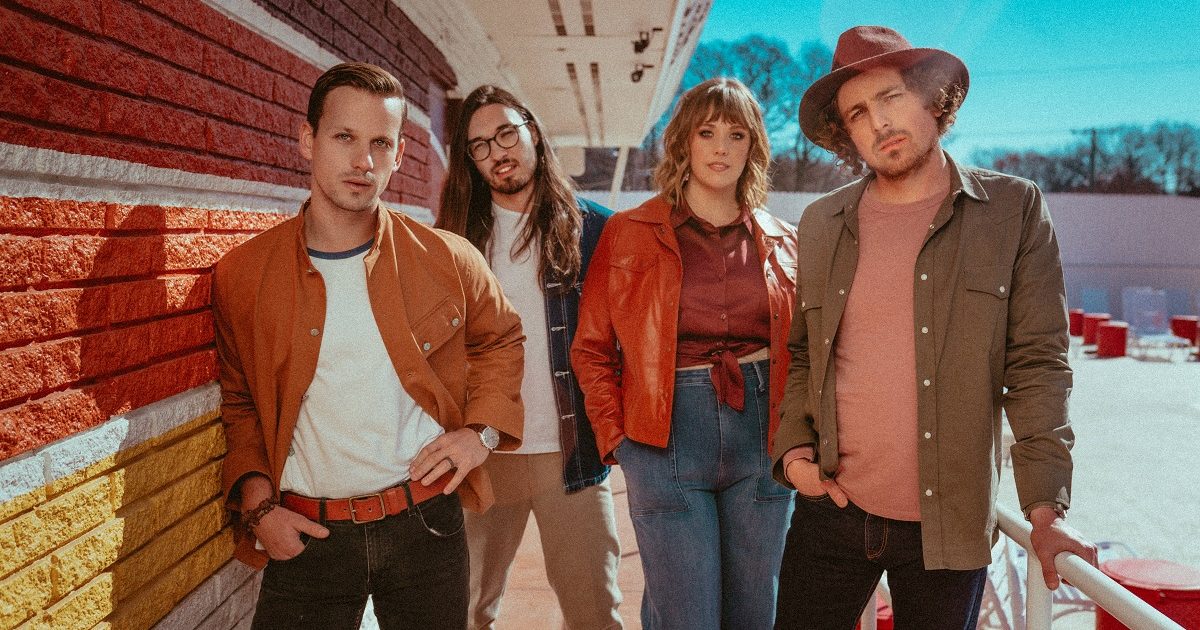 We are a four-piece Americana/indie rock and roll band from Austin, Texas, combining our love of singing and harmony (Catherine and Zack were both opera majors in college) with thoughtful songwriting, musicianship, and arranging (Greg and Kyle are multi-instrumentalists, also with college degrees in music). Being from Texas, we are rooted in its southern/western traditions, but love to musically and lyrically explore the contrasts in culture between rural and urban life, and the way that technology has affected both. This was one of the concepts — what we kept calling “building a space ship in a barn” — that was at the heart of our upcoming album, Paper Airplanes, produced by Cason Cooley, and it is the theme of our mixtape.

These “space ship in a barn” songs are a huge inspiration to us, often using acoustic instruments and natural vocals/harmonies mixed with analog synthesizers and electric guitars. Essentially mixing the organic sounds of the country with those of the urbanized, modern world. They also show a contrast between material things, and emotions that can sometimes best be expressed by otherworldly-type sounds. — Blue Water Highway

We find ourselves constantly referencing the Boss and his Born in the U.S.A. album, and this track specifically, as a great example of how classic rock and roll and rockabilly crossed with an analog CS-80 synth somehow works so well.

There is something about this track, and whole album really, that uses the roots vs. digital mix to maximum effect. The foundation is the fragility of the vocal and the acoustic guitar, but the “space” sounds peek through, like little slivers of light coming down through the dark clouds. Produced by Cason Cooley, this is one of the initial influences for our album.

The National’s 2019 release, I Am Easy to Find, has some of the best vibe in piano tones and “Quiet Light” is no exception. The soundscapes and drumming on this tune were just so innovative yet familiar.

The atmosphere kicks in right from the start and supports this upbeat rocker, which happens to be the only non-ballad on this record, is also produced by Cason Cooley, and admittedly is one of the few non-ballads that MPJ writes. The whole record is a rootsy trip through outer space.

This song combines three things we love: good songwriting, good groove, and jazz. Hozier weaves titles from famous jazz songs throughout the lyrics of this song, and if you didn’t know the jazz songs he mentions you’d have no idea. Hozier is a great example of an artist who uses rootsy sounds with very modern, pop-oriented production techniques.

Is it a country song or not? At least that is the argument we’ve been having in our band since the song came out. The soundscape is obviously a great example of vibey, modern, groovy, indie-rock production, and the lyrics have a very 21st century suburban-kid perspective. But still, there is something in the mood and the lyrics that doesn’t seem too far from Hank Williams… or Dolly Parton… anyone?

Our producer introduced us to this band and this track, which is not only a perfect example of our theme sonically, but also lyrically. The refrain of “build a rocket boys” exactly conveys the sense of childhood wonder we wanted to evoke on our album.

We’re big Taylor Swift fans in this band, always have been. Then she released folklore and evermore in 2020, which somehow fit perfectly with sounds of our album, even though we had already recorded it. Catherine never turned these albums off… ever. Taylor Swift is not given nearly enough credit as a songwriter and this is one of those perfectly produced tracks that makes her shine.

Definitely leaning more on the “barn,” or rootsy, side of things, this is our tongue-in-cheek take on thankfulness, and we still manage to put enough stardust sounds in the mix that it fits with the rest of the album.

This song sounds like sunlight shining through the windows of an old white wooden church. Aaron Dessner (The National) and Justin Vernon (Bon Iver) combine to create the ultimate “spaceship in a barn” vibe. Big Red Machine, The National, and Bon Iver have all accompanied us many many times on late-night drives from state to state.

John Moreland – “When My Fever Breaks”

When an amazing songwriter gets a hold of a drum machine, this is the result. Great songs, and vibey drum production, complete with other synths make this album one to keep revisiting.

Brandon Flowers – “Between Me And You”

Brandon Flowers is one of the core artists we reference. Combining a indie synth rock aesthetic with heartland songwriting, he represents one of the many examples of bringing roots rock into a modern era.

If this came out in 2021, it would probably be called Americana, but we love how these guys were a mainstream rock band with just the right balance between raw and polished. That’s never truer than on this song from This Desert Life, with the way the band uses atmospheric sounds to support the lyrics.

This song is a perfect example of how ambient electronic sounds that you can’t really put your finger on really round out and enhance a song that has organic vocals and drums.

One of the under appreciated elements of ’70s Americana will always be the impeccable groove of the rhythm section. Dawes carries this same torch, along with subtle but innovative guitar work, and brilliant songwriting, to become one of our bands favorite bands.

Adam Granduciel’s guitar work and songwriting harkens back to the way the ’80s musicians blended the rootsy style before them with modern instrumentation. The War on Drugs unashamed use of drum machine sounds and reverb rich guitar tone creates a cool and nostalgic sonic landscape.

Blue Water Highway – “All Will Be Well”

This is a song about the true meaning of hope, and it uses the synth/acoustic dichotomy as a way to contrast the spiritual with the material, how those realities both rub up against each other and work together. At times it feels like a rickety old space ship, and is one of our favorite examples of this sound in our original music.

This is our original song about finding communication, calm, and understanding in the midst of chaos and confusion. The soundscape has many “space ship” elements that evoke communication, i.e. synthesizer and drum machine, which are contrasted with the organic sounds of the harmony vocals, guitar, and drum set.