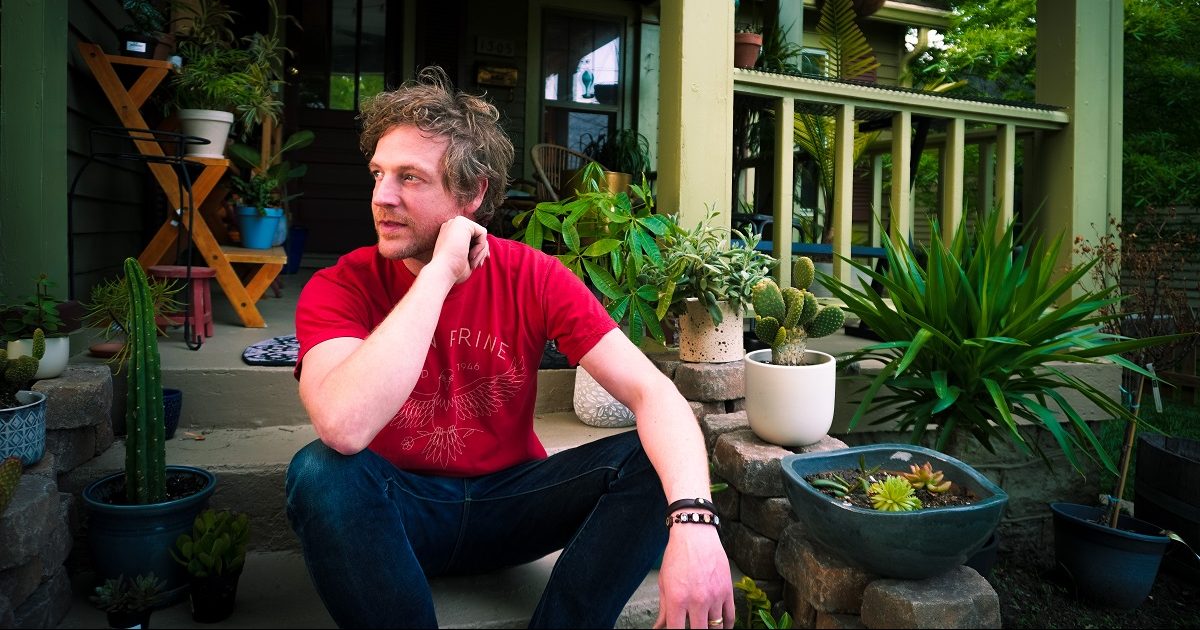 To me, the idea of the joyful contrarian is synonymous with being an artist. Joyful because on some level the creative person’s pursuit is to get high and stay high, to chase the spark that sets your soul on fire; contrarian because artists go their own way. The artist’s work may reinforce or defy social norms but either way the connection is coincidental.

These are a few of the songs, artists, and contrarians who have inspired me. — Korby Lenker

Doc is a reliable tastemaker of enduring songs, but his interpretation of the Dock Boggs classic stands apart. Something uncharacteristically sour in it. Watson usually moves through happier vistas — as in say “Ramblin’ Hobo” or “Froggie Went A-Courtin’.” But here his rueful tenor slaps against a clawhammer banjo and the mood is plaintive, down spirited, and harrowing as shallow grave.

Sierra Ferrell – “Bells of Every Chapel”

In love with this Appalachian Queen of modern yesteryear. She can belt, growl and chuckle inside the same song and still leave you with a lump in your throat. Plus that strong bent of humor and just plain orneriness. Is that a word? Sierra is funny and she’s been doing it her own way since she started. Joyful contrarian incarnate.

I could have chosen a dozen Nina Simone songs. The playfully saccharine “Sugar in My Bowl” might have been a good choice, but there’s a performance from when she was older, well into her activist chapter, where she plays this version of “I Wish I Knew How It Would Feel to Be Free” live at the Montreaux Jazz Festival. It was 1976. The musicianship is effortless, playful even as she sings that lyric of doleful, unfulfilled desire. But the real magic is toward the end. It’s as close as you’ll ever get to watching someone’s spirit wrestle with angels and demons inside. Electrifying.

I got to know Bill Miller over the last few years, I guess during the pandemic. He sang and played Native American flute on one of my songs. A soft spoken humble man with three Grammys and a life of music behind and in front of him, he is absolutely himself wherever he goes. I’ve watched him bring a room full of Nashville cool kids to tears with his singing. For this studio version of “Ghostdance,” he bussed several members of his tribe down from Wisconsin to a Music Row recording studio. He told me the engineer didn’t know how to mic a tribal drum encircled with elders. It got a little wild. I’m trying to think of a way to put Bill’s relationship with music. Blind to judgment, it’s something like that.

Picked this one because it’s an outlier in an outlier’s repertoire. Jerry Garcia did not give a shit who sang what or why. For him a song was good or it wasn’t. “Teddy Bear’s Picnic” from Not for Kids Only is a children’s tune written and originally performed by Henry Hall over a hundred years ago. It’s uplifting and a little sinister at the same time. Plus the chords are magic. I play it sometimes in my own shows.

Writing these blurb things, I notice that most of the artists I’m drawn to are accomplished musicians as well as being great songwriters. Robert Ellis is among the best. He’s like, maybe too good for his own good. At home on piano or guitar, he can reference more musicians and songs than you, and he does this thing I really like with his albums where every song is a moment, its own little movie. This one, “California,” is a slow-motion explosion from the years in his life before he calmed down a little.

This was my most listened to album of 2019. Ten tracks of solo gourd banjo, interpreted by a introverted master of the niche. I spend a lot of time with instrumental music. Wordless emotions hit different. I defy you to find anything in the string music lexicon as inventive and emotive as Hurt’s solo music. It’s banjo as high art. Especially this album, Earth Tones.

More widely known as the creator of 2019’s Tony Award-winning musical Hadestown, Anaïs Mitchell has been making the most inventive music in folk for two decades. Her album Young Man In America is my favorite record of the last ten years. I chose this track from her 2022 eponymous release because it’s a perfect example of deep sentiment couched in well-turned phrases matched with one of the more unique singing voices in the business.

Lou Reed, helming The Velvet Underground in the ’60s, was really the first artist to make music devoid of or without regard to commercial appeal. The original contrarian of art house rock, his songs explored heroin addiction, transgenderism, art for its own sake, and love. During his solo career, collaborations with Andy Warhol and composer John Cage cemented his status as a dissonant God of the avant-garde. “Perfect Day” is from his later catalogue. Sweet and small and sad. You probably know it from the movie Trainspotting.

Randy Newman is an artist of intimidating powers. Another master musician and songwriter and curmudgeonly iconoclast. Watch his Tiny Desk Concert and see what happens to you. Setting aside his singular piano style with its striding left hand and those constantly tumbling suspensions, the songwriting is pure emotion when he wants it to be, derisive if the mood strikes him, or, in the case of “You’ve Got a Friend in Me” (which he penned), the soundtrack of your childhood. “Marie” is my favorite song of his. Listen to the solo piano version on The Randy Newman Songbook Vol. 1.

Hard to find a contrarian with more joy than the Singin’ Brakeman, who died from tuberculosis at the height of his fame at the age of 35. I would describe “Blue Yodel No. 9” as charmingly incorrigible. Something that might’ve made a decent Depression-era mother cover her children’s ears. Little known fact: his longtime songwriting partner, who cowrote more than 40 of his songs, was his sister-in-law, Elsie McWilliams.

Joyful contrarian or talented asshole? Both probably. I maybe should have selected his paean to North Texas methamphetamine culture, “Choctaw Bingo,” as the most contrarian, but I picked this one, the last track from his fantastic 2016 record, Complicated Game. I like this one best because it’s about making peace with where you’re at in life, maybe even celebrating the spot where you land: “These are the best days / These are the best days / Boys put your money away / I got the round / Here’s to all you strangers / the Mets and the Rangers / Long may we thrive on the Long Island Sound.”