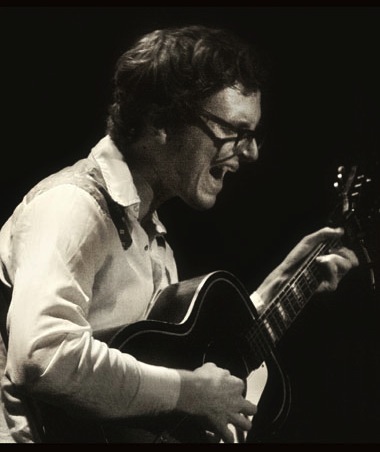 If you’ve been to Manhattan’s Rockwood Music Hall in the past few years, you’ve probably seen the name MICHAEL DAVES.  The guitar maven has held a weekly residency at the venue and is central figure in the New York bluegrass scene.  With his distinct vintage glasses and fast-picking fingers, Daves belts both classic and original tunes with a voice that rings from another era.  While winning the adulation of many of the genre’s foremost musicians, Daves’ presence remained regional until the release of 2011’s collaboration with Chris Thile, Sleep With One Eye Open.  The record garnered lots of deserving attention, with the New York Times heralding their Lincoln Center performance as ‘a plunge into classic bluegrass songs’ with ‘a modern sense of sonic detail.’  As Thile/Daves books more live national appearances this year, Michael sent us his five tunes…

‘Total committment.  This is why Bill Monroe is both the father of bluegrass music and the grandfather of rock ‘n’ roll.  And isn’t that a young Del McCoury lurking under the big hat?’

‘Ditto re: total committment.  This is why Patti Smith is the mother of punk.  Unfortunately she’s the grandmother of bad spoken word, but I forgive her.  If more performers gave themselves over to a song half as much as Patti does, the world would be a better place.’

‘Yusef was my teacher in college, and a constant inspiration.  His music is so incredibly soulful I sometimes cry when I hear it.  Also he’s as warm and compassionate a human as can be, and he had good advice for aspiring ‘jazz’ musicians that should apply to bluegrassers as well: ‘The only tradition in music is sound like yourself”

‘I spent the late nineties immersed in jazz and had no clue what incredible things were going on in the rock world, for instance Neutral Milk Hotel, which I later came to love so much.  This guy Jeremy Enigk is another example from my personal ‘lost era’.  He never got to be very well known but his album Return of the Frog Queen slays me.’

‘There’s not much to say about this – the Louvins are just incredible on every level.  Don’t look into Ira’s crazy eyes too soon before bedtime though.’