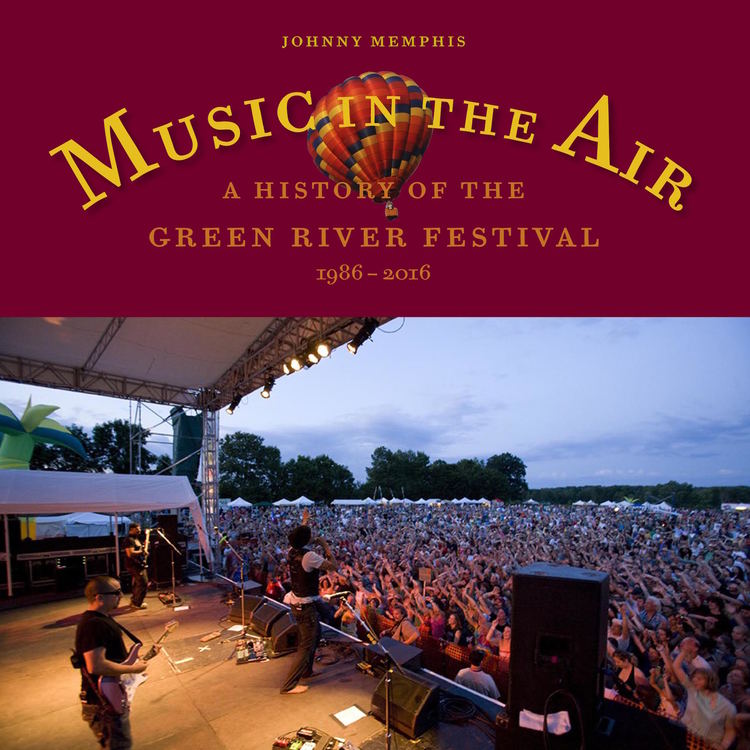 The Green River Festival is one of the most beloved music festivals in the United States. Founded in Greenfield, Massachusetts, in 1986 as a small event for local talent and enjoyment, the festival has since grown into a nationally known entity, boasting artists like Mavis Staples and Steve Earle as two of many impressive performers over the years.

Now, festival veterans and newcomers alike can have unprecedented access to the festival’s history through a new book, Music in the Air: A History of the Green River Festival 1986-2016. Written by radio personality and long-time festival friend Johnny Memphis, the full-color book painstakingly details each year of the festival’s history, providing artist line-ups, exclusive photos, and anecdotes from past attendees and performers.

According to Memphis, the book was planned in conjunction with the festival’s 30th anniversary. "This year was the 30th anniversary of the Green River Festival, so they wanted to do something special for that,” he explains. "Jim Olsen, who runs it, is an old friend of mine — we did radio together for 20 years, and I’ve done various things for them over the years. So I said, ‘Jim, I’d love to write a history.’ There was really a story to tell there, especially as I did more and more research and interviewed more and more people. There was this really cool arc of a small, local thing that a radio station and the Chamber of Commerce, over time, grew through thick and thin to make it a world-class festival. It’s kind of amazing how it transpired.”

The team spent four months pulling the book together, relying heavily on both die-hard festival fans and local media outlets like Greenfield’s daily newspaper, The Recorder, for the photos that ended up filling the book’s pages. "It was under a tight deadline, so the whole thing was pressurized,” Memphis says. "We had to get it done for the festival. We didn’t get a huge jumpstart on it. We knew they had really been on-site and documenting from the beginning, so we were able to tap into a lot of that. Other people who just go to the festival contributed things. We were so thrilled with the images we got. Of course, in more recent years we had more to pull from. It was the early years we were scrambling for.”

Thanks to that crowdsourcing, the resulting book — while certainly a thorough piece of history — reads like a testament to the love that all involved feel for the festival. Memphis sees that love as an integral part of the festival’s evolution over the last three decades. “The local music scene, over time, has developed and nurtured and grown a really cool festival that represents the area, and great music from outside the area,” he says. "Things are kind of small potatoes around here. We don’t have big cities, but there’s a lot of great culture out here. There’s music and food and a really nice way of living. The festival reflects that in that it’s smaller — it’s 5,000 people on a sold-out day. It’s on this grassy field at a community college and it’s very family-friendly and low-key, not a hassle at all. It just happens to have unbelievable music.”

Memphis himself has attended (and been part of organizing) almost every festival since Green River’s inaugural year, and has a few favorite moments of his own, notably the day that he first witnessed the Avett Brothers. “They did a set and I happened to introduce them,” he says. "Even when they came out for the soundcheck and they were warming up, they were so magnetic and so exciting and so talented. This was in the early days when they played with really high energy and were kind of mountain music meets punk rock. They were so spirited, and also such good singers. They ended up off the stage dancing in the crowd with their banjos. The crowd went insane. That’s one of those examples of hitting it right and getting to see something up-and-coming thing that’s really incredible."

Music in the Air is available at GreenRiverFestival.com and in select independent bookstores in the Greenfield area.