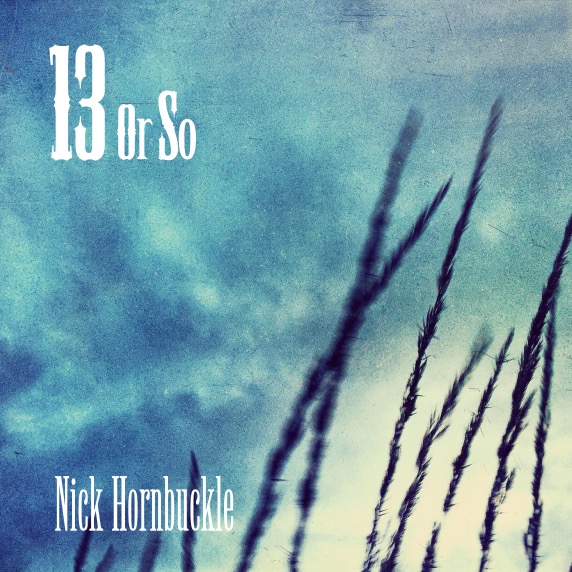 There’s a sort of primitive beauty within the patchwork techniques that have informed and filtered into each individual instrumentalist’s approach to the five-string banjo. Styles rapidly morph and change, aided by the instrument’s relative youth (when compared, in roots music, to all but perhaps the resonator guitar) and its absolute refusal to nestle into any one distinct vein of pedagogy. Scruggs-style, clawhammer and broader frailing, ragtime, picking (i.e. with plectrum), strumming, and even more avant garde approaches such as Greg Liszt’s four-finger banjo all lend themselves to the machine in their own alluring ways.

Enter Nick Hornbuckle, banjoist at large and member of John Reischman’s Jaybirds, who’s just released his second solo album, 13 or So. Hornbuckle’s right hand method defies categorization even by the rule-eschewing standards mentioned above. His two-finger style is decidedly distinct from the eponymous Appalachian, old-time frailing approach, combining aspects of clawhammer, Scruggs-style, and the ethereal, impossible-to-replicate quirkiness of just making your hands do what the music requires without being exactly sure how that works. I.e., playing the banjo.

The resulting aesthetic, which anchors each of the twelve original tunes on 13 or So, falls somewhere within an equilateral triangle whose vertices would be Mark Johnson (of clawgrass fame), Steve Martin, and Noam Pikelny (if he had one finger tied behind his back). “Cleo Belle,” as all of Hornbuckle’s compositions, confounds with its combination of sheer musical athleticism and acrobatics — while remaining absolutely intuitive and organic. With his crew — on “Cleo Belle” that would be Trent Freeman (fiddle), John Reischman (mandolin), Darryl Poulsen (guitar), and Patrick Metzger (bass) — Hornbuckle wholly incorporates vernacular musical vocabularies while still pushing string band boundaries into more art music or chamber music spaces. The arrangement reminds that the western-most communities of bluegrass and old-time acolytes in this country have truly, effortlessly combined the best parts of each, while retaining that rustic, back-porch timelessness that makes the banjo beguiling to all of us.