On ‘I’m With You,’ William Elliott Whitmore Puts Family Wisdom to Use 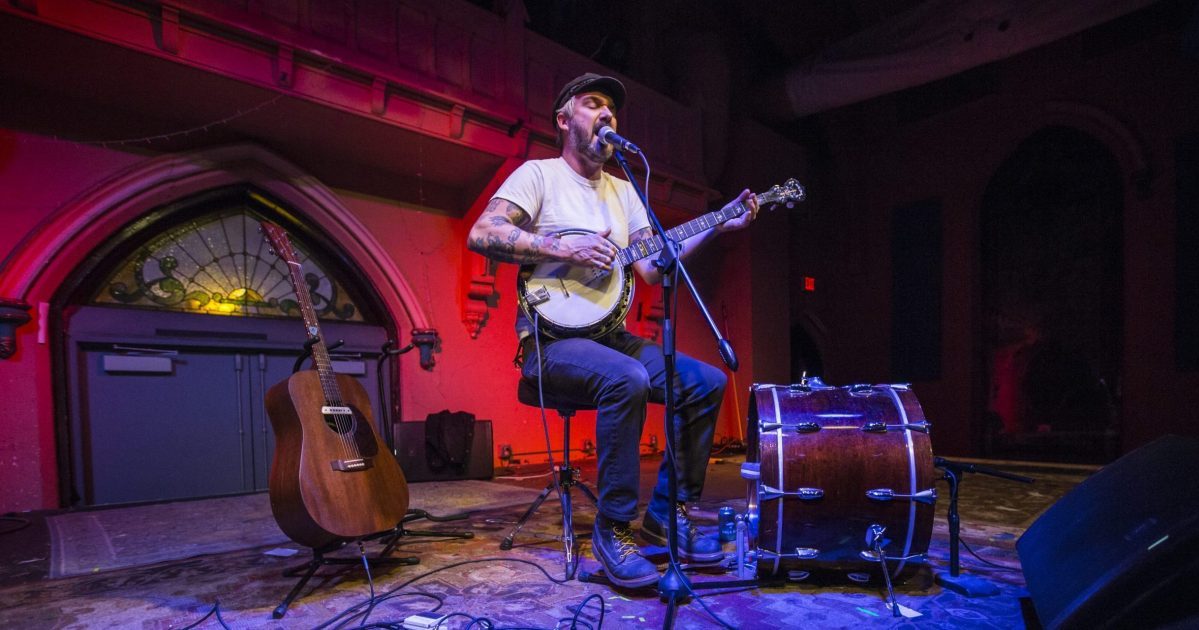 Over the last few years, William Elliott Whitmore has been thinking a lot about how we – as individuals and as a society – have a tendency to repeat our mistakes, and how we’re always trying not to. Yet the tone of his new album, I’m With You, is still infused with optimism, which often stems from the wisdom he’s learned from his family.

I’m With You is Whitmore’s first album of new material in five years, though its material wouldn’t sound out of place alongside his early songs like “Old Devils” or “Don’t Need It.” As always, his banjo and guitar are central to the album’s sound, while his raspy singing voice remains an effective tool at getting his point across.

Though the album does have some heavy themes, Whitmore often points out the silver lining in a situation, and moreover, he’s comfortable chatting up a stranger — a trait not uncommon to the Midwest. He spoke with BGS by phone from his farm in Lee County, Iowa, where he’s quarantining with his wife and their six-month-old baby.

BGS: There are several family relationships that you reference in the album’s first song, “Put It to Use,” and you’ve had family members as characters in your songs for a long time. Why is that bond with your family so inspiring?

Whitmore: Yeah, the bond with my family has always been inspiring. I’m pretty lucky in that I’ve got a big family that’s close by. Aunts and uncles and cousins. My folks were great people, full of wisdom and just caring, beautiful people, but through different circumstances they passed away when I was in my teens. So, that’s when I started writing songs, and in fact, that’s what made me start doing that — to codify what they had always been teaching me. And as a way to deal with it and not just go off the deep end. They pop up in songs a lot, and have since the beginning.

I don’t have them here, so I just think about their words of wisdom and lessons. I think we all get those lessons from someone, whether it’s your folks and a grandparent or a neighbor or a cool uncle or aunt. That cool person down the block that introduced you to The Ramones when you were a kid. [Laughs] It’s like, “Hey, check out Black Sabbath!” So you go, “I should listen up.” Not just music, but lessons, and we can gather that from anywhere. “Put It to Use” is about, OK, you’ve gathered all this good information. Now, put it to use. And more than just music — let’s try to love each other.

Was it someone in your family that introduced you to banjo?

Yeah, both of my grandpas played the banjo. One of them passed away when I was one year old, so I never knew him, but I actually have his old banjo. And one died when I was in my teens, and he was a banjo picker from the Ozark Mountains down in Missouri. My folks loved country music. My mom loved Willie Nelson and Charley Pride – those were her favorites. And in fact, my parents’ first date was a Charley Pride show at a county fair.

But [my interest in] the old-time stuff, Appalachia music and Ozark mountain music, came from my grandpa, and he played the banjo. When he passed away, I got his banjo because I was into playing guitar. I was like, “Oh, the banjo… it’s not THAT different than a guitar.” And I inherited all of his old records. He loved Roy Acuff and the Stanley Brothers. Again, it’s getting that influence from wherever you can.

Were those records your gateway to bluegrass? How did you become aware of bluegrass?

Yeah, those records. … He had a lot of compilations with 15 different artists on one record. You’d find out about a bunch of different stuff, like how Bill Monroe pretty much invented bluegrass by playing old-time music faster than everybody else. [Laughs] And the subtle differences between that and the old-time, slower stuff. A lot of it does have to do with tempo. The feeling is there for all of it, but Bill Monroe kicked it into that next gear.

It’s this whole rich history that’s really cool, and there’s still a lot to learn about, too. So I took that bluegrass influence, but I also liked Minor Threat and Bad Religion and Public Enemy, growing up in the ‘80s and ‘90s. There’s a theme running through all of this — punk and country and bluegrass and blues. Using simple tools to convey a message. No matter where you come from or what color you are, there’s a way to do this.

One thing you do well on this record, in my opinion, is setting the scene. While a lot of songwriters write primarily about themselves, or about love, you are writing about what’s around you. When did you become interested in environmentalism, for example?

That’s a great compliment, first of all. I’m right here on the farm I grew up on, and I’m very lucky to have that. So, the woods and nature and planting gardens — my folks were both naturalists. They wouldn’t have had the word for that, but they loved the land and they appreciated nature. That was passed on to us kids, the appreciation for the trees and the plants and the deer out in the field, and how we live among them and we’re part of it. We’re not above them. The grass in the meadow, the flora and the fauna that we see all around us, we’re just a part of that.

So it just doesn’t make sense to me, as an adult, why anyone would want to pour oil in the water, or level a whole forest, and cut every old-growth oak tree in the forest, just for the money! You want to live in harmony with nature, and sometimes you do have to cut a tree, but you want to be selective and do it in a smart way. … There are so many ways to do it mindfully. That’s my slant on it, and it all comes from living in the woods and living on a farm, and being instilled with those things at an early age.

Listening to your older records, I was struck by how much your singing voice has become more commanding. Did that come from you having to sing on stage, and use it as an instrument? At what point did you sense that your voice was becoming stronger?

That’s another great compliment. I didn’t even know if it was, but you know, it’s funny how things change over 20 years. I first started touring — gosh, it’s been over 20 years ago now. I used to smoke a lot of cigarettes and a lot of weed. … Well, maybe don’t write down “weed.” Oh, whatever, I don’t care. I just had a fucked up voice, but it was all I had. I was like, I wish I could croon like Dean Martin and Morrissey or Ralph Stanley, and have a beautiful voice, and I could never quite get there. So you just work with what you got, right?

So, I quit the cigarettes – and only the cigarettes. [Laughs] My voice changed after that, maybe, but it did come with playing a couple hundred shows a year, for years, and just being on stage, at least in the beginning, where they didn’t know who you are. It’s hard to be a presence when you’re by yourself. I was doing a lot of punk clubs and DIY spaces and bars, where they might not even care that you’re there. So you do have to make your presence known. I had to be more commanding. I am a loudmouth anyway, so it was natural. Put a microphone in front of me and I’ll make you listen! [Laughs] “I’m gonna start singing and you’re gonna wanna listen!” was my attitude, which is funny now.

But that did help me use it as almost a cudgel. Over the years, I’ve tried to sharpen that and make it more of a surgical thing and not a blunt instrument. [Laughs] I mean, I’m only dealing with guitar, banjo, and voice, and a beat — a kick drum now. Each one of them has to count. Any would singer would tell you, you take the time to write these lyrics, and in a live setting they just get lost. You’re just hollering. You have to learn to cut through. … Now it’s a bad habit to break because I’ll be singing in a quiet place, where everyone’s sitting down and listening and no one’s talking, and I’m just yelling like someone needs to hear me ten miles away. It’s those years of screaming over a bar room. I can’t shut it off.