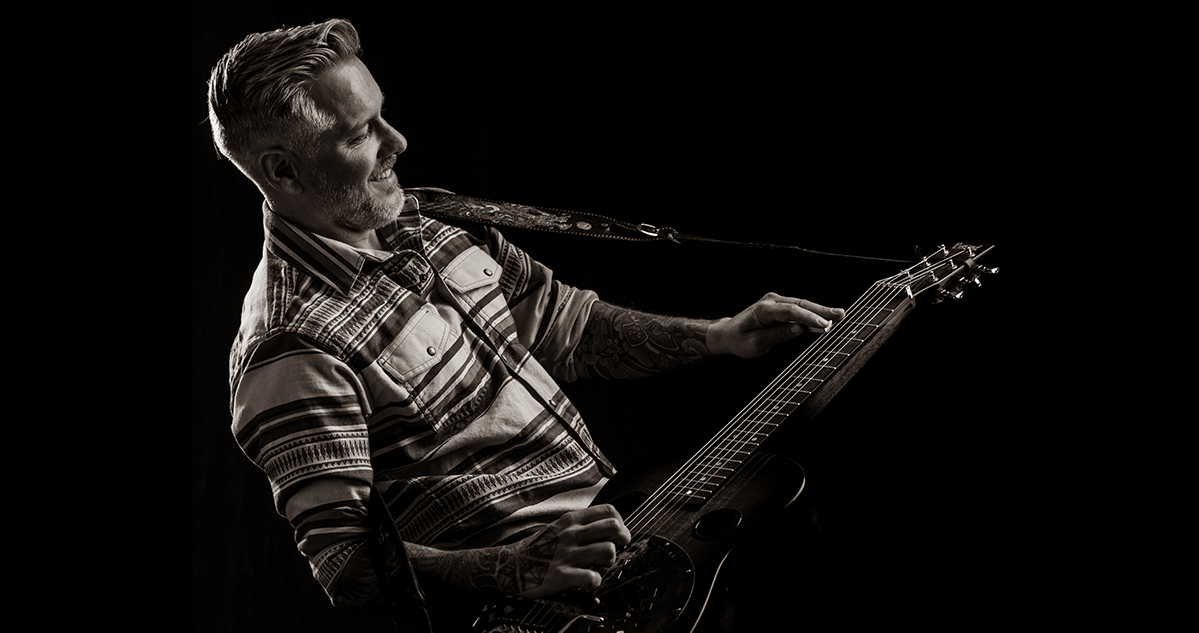 Andy Hall is one of the fiercest slide guitarists we have around not just today, but probably ever. If there’s any doubt, you needn’t look further than his newest release, 12 Bluegrass Classics for Resophonic Guitar. The Denver-based singer and Dobro player of the Infamous Stringdusters has always pushed the envelope, but had never taken the time to put his own stamp on the formative tunes that all musicians of the genre play with one another. From teaching thousands of students online via ArtistWorks, to his work with Earl Scruggs, Dolly Parton, or Jack Black, it’s obvious that Hall is a master of the instrument, and the art itself.

BGS visited with Hall to talk all things pandemic, resophonic guitars, and what this record means in a time like our own.

BGS: What was your initial inspiration for this recording?

Andy Hall: It was an interesting time in the spring when I was recording it, you know, but it’s all about taking opportunities that present themselves and making the most of the situation and what you can do. When everything stops, you have no idea what’s happening, you’re pretty quickly trying to figure out how to continue to be expressive. Our band the Stringdusters has toured so much for so long. …I don’t want to say I took it for granted, but when it all went away it was surprising — there was this withdrawal from doing the things that I love to do.

These are songs I’ve played for years and years, and I’ve always wanted to put my stamp on them, my take, you know? I totally overlooked them as anything I would record, because I always played them in jams. For most people, they don’t know these songs. So, I thought it would be the perfect opportunity to get a recorded version of all these jam songs. It was really just a matter of me sitting, playing, and enjoying these tunes enough to get a good representation of them.

At the same time that you’ve put your own stamp on these tunes, you said that they were formative. I noticed the speed-up in “House of the Rising sun,” just like Mike Auldridge of the Seldom Scene would do. Are there any influences you’re drawing from, more than others, on this record?

Everyone has their own version of what their “classic” tune would be for a certain instrument. So “House of the Rising Sun,” definitely based on the Mike Auldridge version. To me, if you do that song on Dobro, that’s just how it goes. “Dixie Hoedown” was on Jerry Douglas’ first solo record, and something like “Fireball Mail” couldn’t be a more quintessential dobro song. I was always too impatient to sit and get every nuance of somebody’s playing, so I kinda gloss over it for the general idea and fill in the blanks myself. So due to my impatience I have my own style with a lot of them.

So that’s what a lot of these are like, but you can trace most of them back to an original version — like “Cherokee Shuffle,” Sally Van Meter, a great dobro player from Colorado, did that on a record called the Great Dobro Sessions. One that’s totally my own is the first one on the record, “Leather Britches.” I’d never really heard a version of that, but I wanted to try and get that repetitive, cyclical, rolling sound of the fiddle. So a lot of them are jam tunes that I never heard a Dobro version of, and wanted to develop my own thing with.

I actually was fortunate enough to get to play with Earl Scruggs some, and that tune is a perfect example of how I didn’t take the time to learn it officially like Josh Graves. When I auditioned for Scruggs’ band, I went to his house and jammed with both Earl and a fiddle player named Glen Duncan. My mind was just blown, you know, we’re just sitting in Earl’s living room playing “Foggy Mountain Rock.” When we finished playing it, it was clear I hadn’t done it the way he was used to hearing it. And he complimented it! “Oh, I love how you put that four chord in there. I love when people do their own thing.” That really justified my whole approach. If Earl Scruggs says it’s cool, then I’m good.

Do you teach many of these in your class over at ArtistWorks?

There are a couple in my school. “Panhandle Rag” is in there, “Cherokee Shuffle.” I’m about to transcribe not just the melodies, but the solos for a few of these so that the students can have a crack at them. It seems primed for that kind of thing. This is a specialty project geared at Dobro nerds. With the Stringdusters or other projects I do it’s a bit more broad, usually song-based. This record definitely ties into ArtistWorks; it’s just getting deep into the slide guitar thing… because that’s what I love!

“I am a Pilgrim” is so woody, while “Cherokee Shuffle” has that cutting metallic ring of the Dobro… Can you talk about some of the guitars you used on this record?

“I am a Pilgrim,” “Amazing Grace,” and maybe “Foggy Mountain Rock” were all played on a 1929 Squareneck Tricone National guitar. To me it just has a super unique blues sound. So I used it on the tunes that were slower, just to get some variety. I wrestled with how much variety to put on the record in that way, because I have a bunch of different slide instruments. I’ve got a Chaturangi, which is an Indian slide guitar with all of these resonant strings, of course lap steels and things of that nature, but I decided I wanted to keep it kind of Americana sounding. The National fit into that. All the rest I did on my favorite Beard guitar.

Speaking of formative years, I’m curious if there are any younger Dobro players that stick out to you, or even influence you?

For sure. As a Dobro player, when I was in my twenties, at a certain point I kinda felt like I had heard everything, because there weren’t all that many. I’d heard all of the Jerry Douglas and Rob Ickes, Mike Auldridge and Josh Graves. There’s a lot to dig into, but compared to any other instrument, there was a much smaller pool of stuff to draw on. It’s been cool as new players come up to hear new styles. I think the first guy that was new when I first moved to Nashville was Randy Kohrs. He had a technique that nobody else had.

Out of that came a couple of younger players that I really love like Josh Swift, who played in Doyle Lawson’s band for years. His technical ability is just insane — nobody else can do what he does. There’s a young guy named Gaven Largent who I remember teaching when he was probably 12. There’s a guy named Tommy Maher, who plays in a band called Fireside Collective. Andy Dunnigan from the Lil Smokies, he uses the Dobro very lyrically, and he’s the lead singer too. I love seeing that — a lead singer Dobro player!

I’d say one of my biggest influences in recent years is Roosevelt Collier, a lap steel player. I met him in 2013, on JamCruise, and of course became fast friends with the slide guitar connection. We stayed in touch and actually did a record together a few years back. Roosevelt’s very gospel, sacred steel, very singing, very emotive style, is something I’ve really tried to absorb. It just gets you in the chest.

What do you foresee, or hope, will be the impact of this record?

There’s something about the coronavirus, or the lockdown, that made every part of life simpler. A lot of things got stripped away and we just got down to basics, be it hanging out with our families and making food, or with the music we’re not doing big tours or big production — we’re sitting in our basements by ourselves playing. It’s certainly one of the silver linings of the whole pandemic thing, the simplicity and the sweetness, and that’s what I was feeling with this. It’s just a reflection of me sitting and playing, and hopefully people will relate to that. People have had to strip everything down to being simple, and that’s what this record is. It’s a reflection of that return to the basics that the pandemic has put on us. It’s really forced us to get back to the root of why we do what we do!