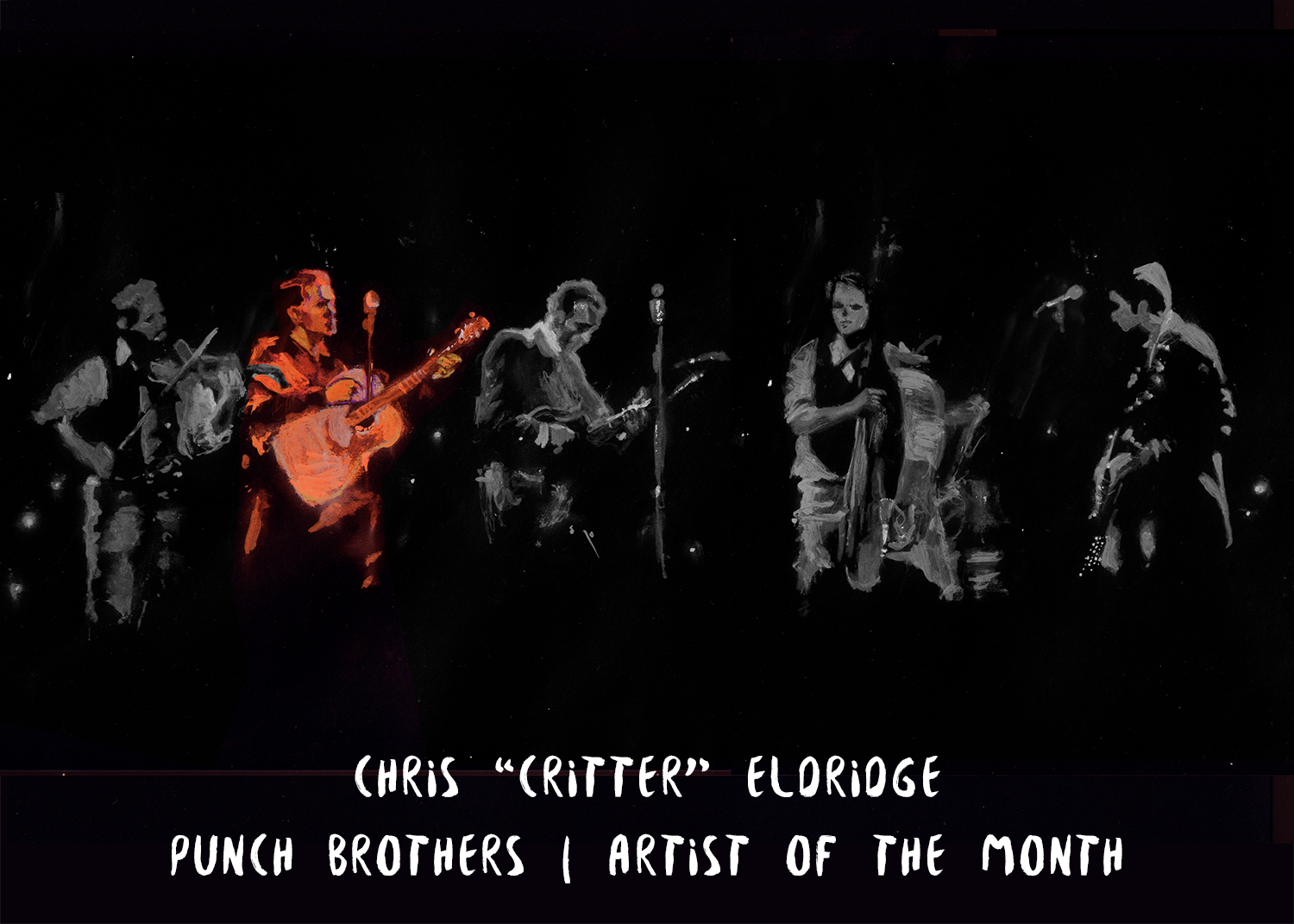 Chris Eldridge, the good-natured guitarist for Punch Brothers, comes by his bluegrass pedigree honestly. As a young man, he attended innumerable shows by Seldom Scene, a pioneering ensemble whose lineup included his father, banjo player Ben Eldridge. After studying at Oberlin Conservatory, he co-founded the Infamous Stringdusters, which won three IBMA Awards following their 2007 debut project, Fork in the Road. Indeed that album title proved auspicious, as Eldridge took a different path with the formation of Punch Brothers – a rewarding partnership that a decade later has yielded their newest project, All Ashore.

This interview is the third of five installments as the Bluegrass Situation salutes the Artist of the Month: Punch Brothers.

When I saw you guys at the Ryman, I noticed you were wearing a Hawaiian lei, so I take that as a sign that things are going well on the tour. What’s the vibe so far?

The vibe has been really fun and it’s great because the band’s back together, as they say. We’ve been connected, all of us in various ways, even in this time off from the band. I see Thile a bunch because I’m usually playing guitar on Live From Here. Paul lives really close to me, so I see him like every other day in Nashville. And Noam is close, and I see Gabe, but to have all of us in the same place out on the road for me is a really fun thing because one of the real privileges of my life is getting to play music in Punch Brothers, getting to be the guitar player in a band with those guys.

One of my favorite songs on this record is “The Gardener.” I feel like it sets a nice tone and tells a hopeful story. Tell me what the band was hoping to capture with that song.

Well, the music was started on that years and years ago, probably in 2012. We were in London doing a thing with T Bone Burnett for a movie and this simple melody kinda just sprung up. We were trying to brainstorm some stuff for this movie and it almost sounded like a Christmas carol. And so it was this thing that we always really liked, and we didn’t give it to that project that we were there working on. We wanted to hold it close to our chest and keep it ourselves. It was something that we had sitting around, even for The Phosphorescent Blues, but we just didn’t develop it into anything.

And then Thile had come up with that kind of weird, modulating, tonally ambiguous guitar that starts the song. He showed that to me and it was really cool. The way it works for us is, we always work on music before there’s any content, in terms of story. That’s pretty much how it tends to progress for the band. We’re definitely a music-first band. So it was a matter of making both of those ideas interesting. And the original idea from 2012, the Christmas carol idea, was really neat and we really liked it but it had a limited amount of development. A lot of Punch Brothers music, the song will have to have a certain amount of development. It’ll tend to go places. Usually we won’t just repeat a thing over and over.

And as we were trying to develop that, someone had the idea, “What happens if we do that crazy, weird, finger-picked guitar thing — the ambiguous tonal thing – and pop it together?” We had to change the key around a little bit but we found a key relationship that worked and it solved this problem.

So then it’s a matter of figuring out what the song is going to be about. Thile had this idea about a gardener, some guy kinda tending. You know, because the music is not lonely exactly but there’s like a forlorn imagination, like optimistic vibes, that are encoded into the sound of that melody. So it was trying to find a story to go along with it. And it dovetailed with a lot of the things that we’ve been thinking about and talking about as a band, in terms of society today. People who have things and people who don’t have things. People who feel protective of themselves and their tribe. It’s a meditation on a lot of those kinds of thoughts. I’m barely touching on them, but that’s kind of where it came from.

You guys would make a pretty cool Christmas record. Has that ever come up?

We’ve talked about it before. I don’t know if we’ll ever do it, but I think that would actually be really fun. There are so many cool, beautiful songs. Really timeless, gorgeous melodies. There is some solid music there in that canon of holiday music. It’s so hard to get everybody’s schedules to align now. People have three children in the band at this point, and three wives, and essentially all of us are in completely and deeply committed relationships … and we’re all older. The band can’t sit totally in first place anymore, which is necessitated by having families and that’s now the most important thing. So we really have to be deliberate about our time and it means that we don’t do as much stuff together – but when we do, we try to really make it count. That being said, I would love to make a Christmas record.

I thought with your connection to Seldom Scene, I’d ask if you knew John Duffey well.

I didn’t know him that well, but I certainly grew up around him. John didn’t really know how to relate to little kids. I have a lot of memories of being around John, just being around the band, but I didn’t really interact with him much until towards the very end of his life. We’re talking probably the last less-than-six months he was alive really. He started to acknowledge me because I was probably 13 or 14 years old. I was just getting to the age where he related to me as more than just a small child. I was starting to feel a little more like someone he could relate to.

I remember the last time I saw him alive. I was sitting backstage at the Birchmere. They have these big chairs and I was sitting in one of them. He came up behind me and just scruffed me by the hair and said, “Hey there, guy.” That’s kind of where the story ends but I was just so blown away, like, “Whoa! John Duffey just talked to me!” That was an amazing thing!

I have very clear memories of the sound of his voice. I probably went to hundreds of Seldom Scene shows and I heard those guys play hundreds of times when I was a kid and the sound of Duffey’s tenor, the sound of his mandolin playing, the sound of Mike Auldridge’s Dobro bouncing off the walls. That stuff is burned so deeply within me. I’m so thankful and grateful for that. It’s this crazy privilege that I was just born to have those experiences. As I get older, I appreciate more and more how cool it was. But I don’t think I ever really took it for granted. I loved the music, I loved the sound of that band from the time I was a boy.

I know that Tony Rice is one of your heroes too. How has his music shaped the music that you’re making now?

Oh man, profoundly. He provided such a great example of musical integrity. In terms of rhythm, not just rhythm guitar playing, but actual timing, his sense of time and elegance and grace and power and intelligence – all these things that I really try to emulate. The goal was never to be a clone of Tony. I mean, it’s easy to learn the note that he plays. It’s not that hard but I feel like once you do that, then the real learning begins. What’s he doing with those notes? Why is it so good when he plays them? What’s going on there? That to me is when the rubber hits the road and that has everything to do with his musicianship and his sensibility. And so those are the lessons that I studied so hard and it affected my outlook and approach to how I want to present music on acoustic guitar. And just music in general.

But I would argue that Tony had strong ideas about that and his enormous integrity to those kind of musical values was really influential to everybody in the acoustic music community. His high level of musicianship – and how he retains some of the essence of bluegrass, the rhythmic essence – sets the stage for a lot of the modern music that we like. And certainly Punch Brothers. Certainly all of us were deeply influenced by that example of musicianship.