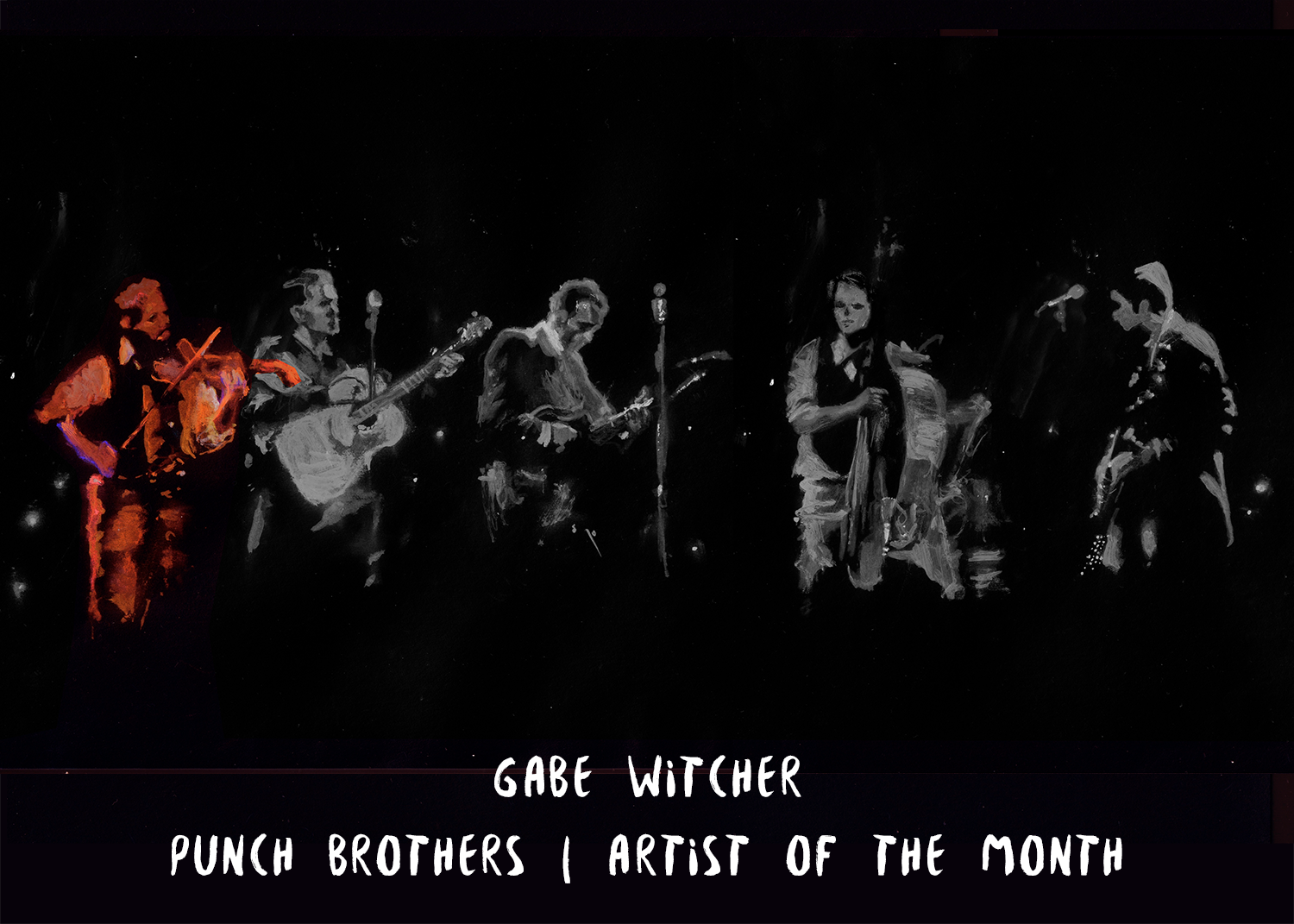 Gabe Witcher, the fiddle player – and some might say secret weapon – in Punch Brothers, has been a performer for nearly his whole life. As a kid, he toured the Southwest playing bluegrass with his family’s band; that’s how he met Chris Thile, forming a musical friendship that has spanned more than three decades. Though his stage presence is low-key, his musicianship is undeniable, playing as joyously or mournfully as a song requires. This is also true on Punch Brothers’ newest album, All Ashore.

In this interview, Witcher kicks off a five-part series as the Bluegrass Situation salutes the Artist of the Month: Punch Brothers.

I love the fiddle part you play on “Three Dots and a Dash.” I was wondering, how much of your music is arranged when you go in to record, or how much of it unfolds by feel when you’re in the studio?

Yeah, this record is a lot different than our previous records. We really had the bare minimum amount of time to get it done. Historically, there is a good deal of improvising on all, throughout our music, and so that’s always spontaneous every time we play – in the studio, out of the studio, whatever. But there is a good deal of highly-arranged stuff as well and historically that stuff would have been written and rehearsed for months leading up to getting into the studio … and we just didn’t have that luxury this time. So, while there’s a good deal of arranged things on the record, it all kind of came together in the studio anyway.

“Three Dots” is a good example where we had the form, we had the melodies, we knew “this is how the arrangement is going to unfold, this is who plays when, this is what the song’s going to do” when we got into the studio and played it a few times – and didn’t like it. So, we put the brakes on recording and went and huddled up in one of the corners of the studio for three or four hours and completely reworked the entire middle section of the song. From post-middle-solo until when the melody returns at the end.

It’s just one of those things: “This isn’t good enough yet, so let’s make it good enough.” When we did, when we finally got something we liked and went back in and recorded it, a lot of that section, I’d say it’s about 50/50 arranged and improvised. Solos are improvised, but we got something that we absolutely loved and that all happened in the moment in the studio. That is a new thing. That has never happened to us before because we had always historically gone in super prepared with, “This is the music, this is what it’s going to be.”

One of the things I love about this record is that what you’re hearing on the record is the first time any of these songs were performed to our satisfaction. You’re getting the excitement of us discovering this music and playing it for the first time. That’s always an exciting thing to hear.

Yeah. So you said bare minimum. What was the timeframe for this?

Oh, let’s see. I think we wrote the record in about four weeks. Not all together. We had three days in October, we had eight days in December and then two weeks in February to get it all situated. Then we recorded it over the course of three weeks in March. And then mixed in April.

The Phosphorescent Blues took almost three years to write. We had the luxury of writing it over the course of three years not work every day, of course. We might have worked twelve weeks total on it, but we had the chance to sit with things and revise, and change, and live with it. This one was more of a “Let’s just get it out.” And I think it worked to our benefit because everything feels super fresh on the record.

I read that you played on the score for Brokeback Mountain and Babel – and they both won the Oscar for best original score. Do you think there’s a cinematic component to Punch Brothers’ arrangements as well?

Yeah, absolutely there is. That’s a comment we get quite frequently. It’s not intentional, but I think everyone is in love with trying to find narratives that can happen instrumentally along with a lyrical narrative. We’re always trying to find textures and new ways to approach presenting musical ideas and finding interesting ways of getting you from point A to point B. I think there’s a definite classical music influence in that regard. Not only is the music supporting the lyrics in a vocal as it would in folk-based or pop music, but the music itself is also helping to create the narratives.

You in particular have a bluegrass background, from playing in your family’s band. How did that prepare you for this experience of touring with Punch Brothers?

Surprisingly enough, doing that is how Chris and I met. We met at a festival called Follows Camp Bluegrass Festival that happened in Southern California. My family would always go up and camp and play and my dad would emcee a lot of the time at that festival. There was a contest and our family band got booked to play it. I think it was the second year or the second time it happened. A 5-year-old Chris Thile just happened to be there that time. As he tells it, he saw me playing onstage with my dad and was like, “Oh my God, that’s so cool. Another kid plays!”

After we got done, we were introduced and immediately became friends. I think we played baseball in the road that ran along the campground, then spent the rest of the time playing tunes with each other. Doing that led directly, a couple decades later, to this band becoming a thing. Of course, you can’t discount the years and years and years spent learning the craft of playing, and playing in an ensemble, and performing. I didn’t know it at the time, but it’s a unique way to grow up.

The good news is, I got all the … well, not all, but a good portion of the dues-paying out of the way before I even knew I was paying any dues, so by the time I was out of high school I had a level of proficiency as a professional that most people don’t have the luxury of gaining until they are well into their 20s. I was able to hit the ground running. I went to college as well, for music, but I’ve got to say: music was there all along. The only thing that changed was that I finished school. So that went away but the music continued.

You were able to play with Bill Monroe as a kid, too, right?

Yeah, when I was 6, we were at the Strawberry Music Festival. This is the thing that launched the family band. My folks decided that we were going to go up to the Strawberry Music Festival, which at that time happened in Yosemite, California. I had been playing for almost a year at that point. We just went to camp and hang out and check it out. One of the days my dad and I were jamming at the campground, and people wandered around the campground, so people were coming in to listen. Then they’d wander off.

Monroe was playing that night at the festival. He was headlining the show that night and they had gotten him to do a workshop during the day, a mandolin workshop. My dad took me over to that. I didn’t know who that guy was. He was just some old guy up there playing. There were a couple hundred people at this workshop listening to Monroe, and right towards the end, and my dad would probably remember better than I do, but somehow, someone pointed me out and said, “Have you heard this guy play? You should pick a tune with him, Monroe.” And so Monroe got me onstage and he and I played a tune called “Gold Rush.” It’s actually one Byron Berline wrote when he was in Monroe’s band.

So Monroe and I played that tune and I got a pretty cool picture with Monroe afterwards. Then, later that day, probably because of that, the Strawberry folks asked if my dad and I would do what they call a ‘tweener set, where you go up and play two or three songs in between the main stage bands. So, Hot Rize was playing and then New Grass Revival was going to play after that. I think this was the day after Monroe played. So my dad was like, “Yeah, sure! Yeah, we’ll work up three songs.” So he grabbed a bass player and a guitar player and also asked Byron if he would sit in on the solo. And so we got up and played three songs, and Byron came out, and we played “Gold Rush” together. And it was so much fun, my dad said, “Hey, do you want to do this more?” And I said, “Sure!”