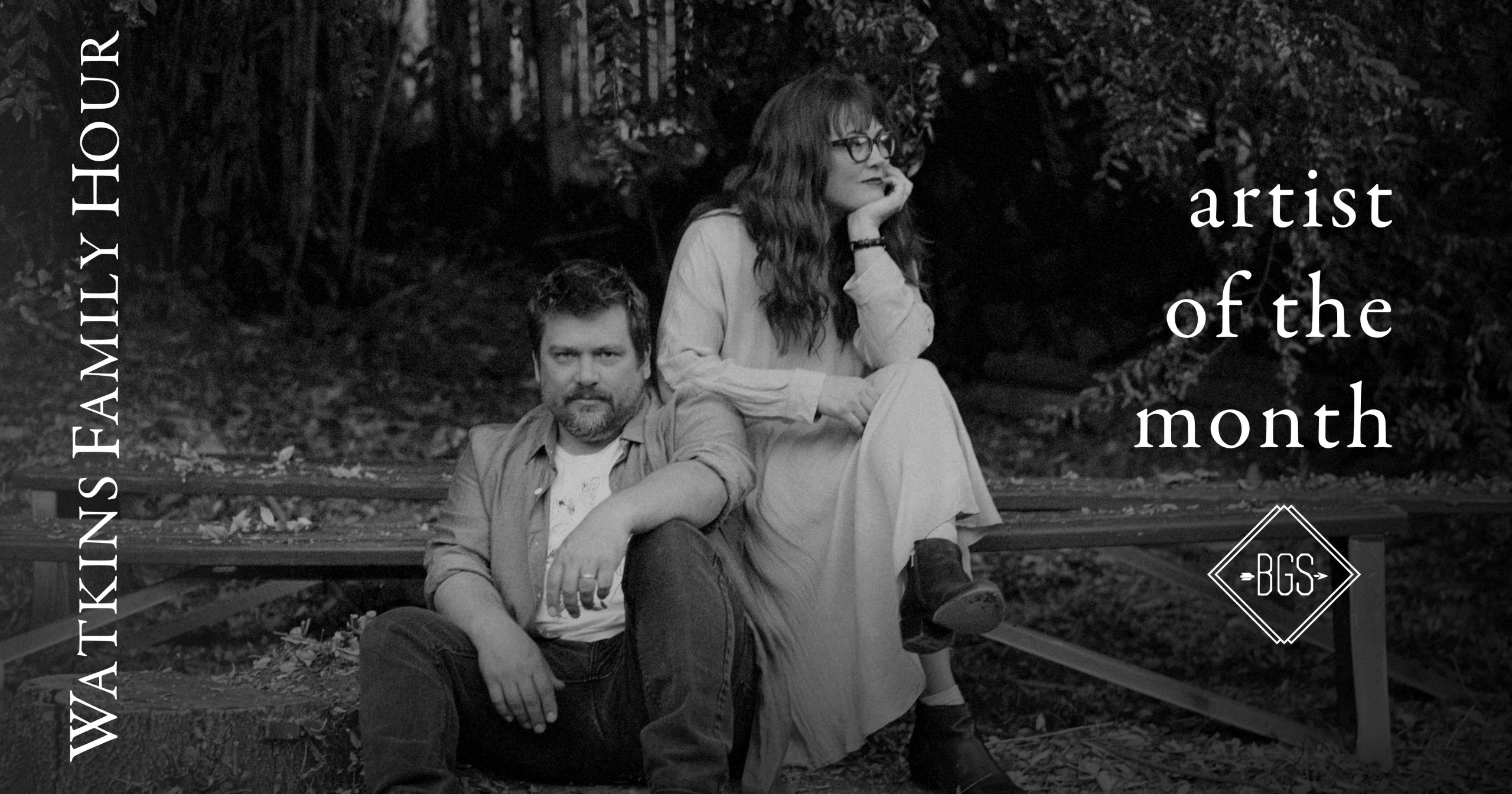 For brother sister, Watkins Family Hour’s sophomore album and first in five years, Sara and Sean Watkins decided to tighten their focus, writing songs that allowed them to shine as a duo. “It was an experiment, and it ended up being so fun and totally different from the first Watkins Family Hour record we did,” Sean says. “In this case, more than any other project, we were very deliberate about the style of the songs, how they came together, and how we recorded them.”

The effort paid off. Ringing in at ten tracks, including seven originals, brother sister ranges from glittering, harmony-driven folk (opener “The Cure”) to can’t-help-but-dance silliness (“Keep It Clean,” a Charley Jordan featuring vocals from David Garza, Gaby Moreno, and John C. Reilly). We caught up with Sara and Sean individually, chatting about the album and the forces in their careers that built them, including their early years with Nickel Creek. Read our Artist of the Month interview with Sean below, and catch Sara’s interview here.

BGS: You wrote a good portion of “Fake Badge, Real Gun” before you brought the idea to Sara. What inspired it?

Sean Watkins: I have a folder in my notes on my phone, Future Song Titles. I like to think about what a good song title is — you know, when you see a song title on a record and you’re like, “Oh, I really want to know, I want to hear that song.” A book title can be the same way. I heard the term “Fake Badge, Real Gun” in a hotel room on some kind of local news station. It was a headline, probably a story about a kid, or somebody who was pretending to be a police officer. When I heard that phrase, I put it in my phone, because I just thought, “There’s a lot more in there to be explored.”

There are plenty of people in power who don’t deserve to be. They have the power to destroy and create a lot of chaos, but they didn’t really earn it, or they don’t deserve to be there for one reason or another. Everybody comes into contact with authorities who affect you in profound ways, especially when you’re younger, without knowing how they’re affecting you negatively. At a certain age you get to a point where you unpack your childhood — what your teachers taught you, what you heard in church or what you heard in college — and you have to look at it objectively and figure out who gave you that advice, what they were meaning to get across, and whether you still believe it.

Did anything in your life specifically come to mind?

I went to a Baptist Christian school for a while. It wasn’t because my family was Baptist, but because it was the closest private school, and my parents were public school teachers and didn’t really like the way public school was going. The teachers were pretty strict, evangelical, and I remember this girl who was probably in seventh or eighth grade. She had a great voice, and she got vocal nodes on her vocal chords — it’s just something that happens when you don’t use the right singing technique. It happens to a lot of people. But she asked our Bible teacher, “Do you think God gave me these vocal nodes because I’ve been singing secular music?” I think she’d sang an Oasis song at a coffee shop or something.

And the teacher said, “Yeah, that’s probably why.” Like, in all seriousness, he told her that, because she sang a secular song, God gave her these vocal nodes. And he believed it! But who knows how long that stuck with her, that by singing a certain kind of song God will strike you. You can carry that with you for the rest of your life, whether you know it or not. So I try to think about that in my life: What are the things that I’m carrying around that I don’t need to carry around, because someone who had authority used their “gun” in a way that was, looking back, absolutely wrong? You can take the idea out to any number of places in the world.

The cover of the Charley Jordan song is so fun — what a way to end the record. Can you tell me about deciding to cover “Keep It Clean”?

A few weeks before going into the studio, and we were taking inventory of what we had, what kinds of things might be fun to add to the record, what was missing. We just thought it’d be fun to have one song that’s just a party song: what people know the Family Hour to be, which is kind of a wild, fun ruckus; a song that’s easy for anyone to jump in on, with different people singing verses. Something that sounds like what we do when we play our shows [in Los Angeles] at Largo.

Originally I heard this song when I did a month of shows with Lyle Lovett, playing in his band years ago filling in for a friend of mine who played guitar with him. He did that song every night, but totally different: His version was a bouncy, Texas-swing kind of vibe. I really liked it, and I asked him where it came from. He said it was a Charley Jordan song, but that he’d changed it a lot, and that I should check out the original. It’s so funny because it’s such an old song, but it has such a beautiful, almost current pop melody to it. The guitar line in the original version sounds like a Beach Boys melody. It doesn’t sound like ‘20s blues at all, and I thought that was a really cool element of it. So we based our version on that, although it evolved and sounds very different.

Another thing I like about it is that the lyrics are just quirky and weird; you can’t really tell what they are. The verses were based on popular off-color jokes at the time. So people hearing the song back then would have gotten these references that we’re not getting right now. [Laughs] And they might just be really dumb jokes! It’s like a museum piece. I thought it was so cool.

It’s been twenty years since Nickel Creek released its self-titled, breakout album. How do you feel like the success you had then influenced the way Americana and bluegrass are perceived now, or influenced the player you are now?

Every seven or ten years it seems like there’s a recurrence of some kind of music, and at that time, there was a confluence of things that happened that brought acoustic music way more to the forefront. A big one of those was the O Brother, Where Art Thou? soundtrack: a soundtrack for a movie that sells millions and millions of records, and is mostly old-time bluegrass, that’s a big deal. Alison Krauss was the only one selling millions of records playing anything related to bluegrass, and she wasn’t playing very traditional music. So that record came out, and Alison was — still is — just cranking away, hugely popular. We kind of got lumped in with all of that. People thought we were on the soundtrack a lot, which we weren’t. [Laughs]

There was just a wave. We have to give Alison credit because she saw the potential in what we could do. That first record is a very different record than we wanted it to be. We were so young, so green. We wanted to make a much more wild and aggressive type of record, and she was like, “Listen, that’s fine for your live shows. But it’s not gonna wear well. It’s going to be exciting to listen to the first couple of times, but people aren’t gonna want to listen to it a year from now — you’re not gonna want to listen to it a year from now.” She was really wise in restraining us in a lot of ways that we wouldn’t have.

Do you still take that advice to heart when you’re recording?

Absolutely. I have a mental bag of tricks that I’ve collected from different people over the years. A lot of the great producers will say something that really sticks with you, and it’s immediately like, “I’m gonna remember that and apply it the rest of my life.” I remember being in the studio one time for something that T-Bone Burnett was producing. We were in the control room, and he was musing and talking about the creative process, and he said, “People think about writing songs like writing songs. Don’t think about it that way. Think about writing a feeling. Like when you’re writing a movie, you’re writing a story. When you’re writing a song, just write a feeling — don’t write a song.” I was like, “That is soooo great.” Because that’s exactly what it is! A song’s supposed to make you feel something.