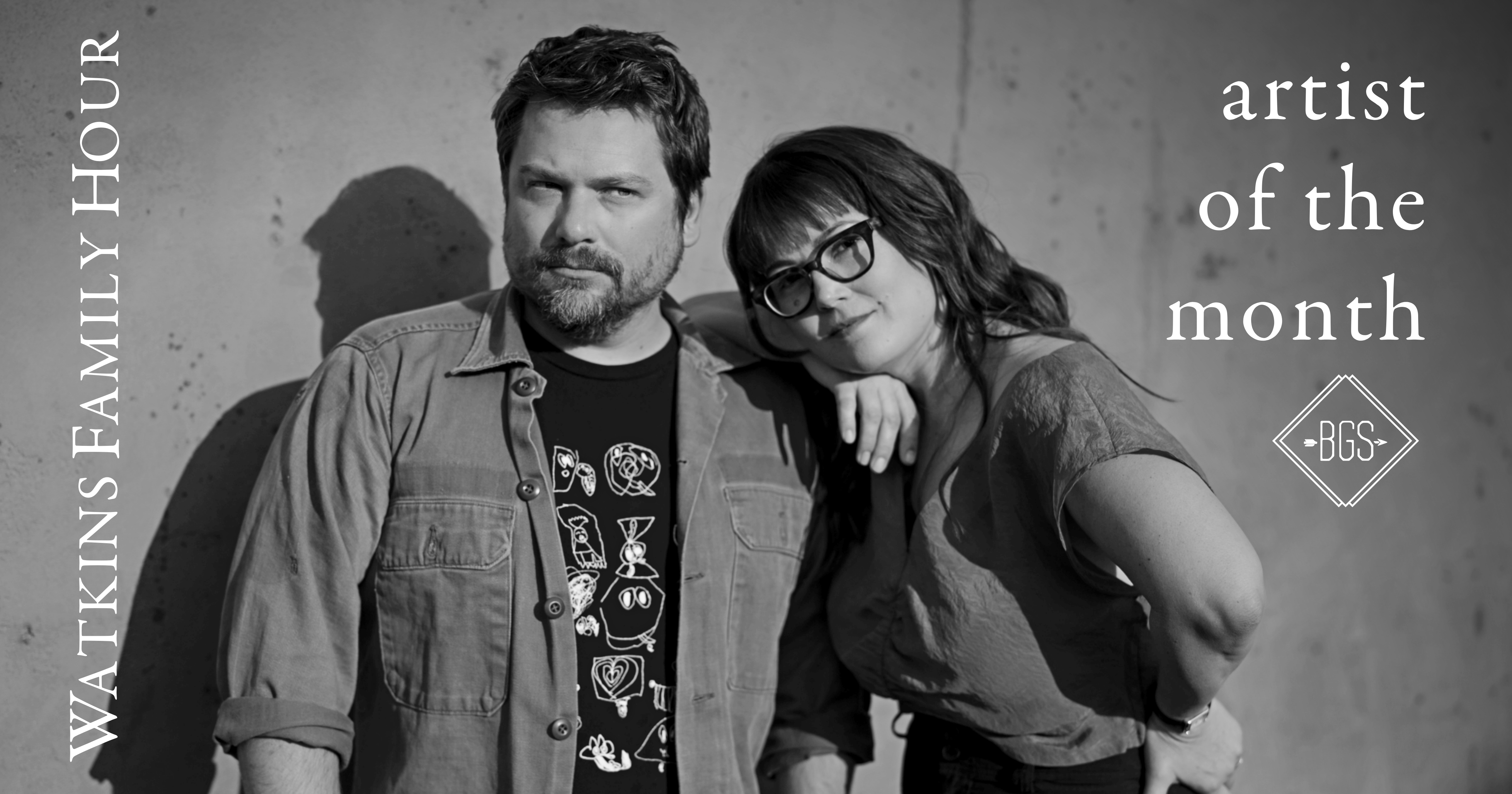 Sara Watkins is up to something — or at least, there’s a pretty good chance she’s up to something. The singer/songwriter and fiddler first found international recognition with Nickel Creek, but these days she stays busy with a rotating lineup of other creative outlets, from her solo work (three albums and counting) to her harmony-singing supergroup, I’m With Her. Oh, and then there’s the raucous Watkins Family Hour, an act with her brother, Sean, that holds regular residencies at LA’s Largo with a delightfully irregular cast of collaborators liable to join them.

This time, though, they wanted to focus on the core of the group. Their new album, brother sister, marks the first time that the siblings have sat down to write together. “We were both in a place where we wanted to focus on the potential of the Family Hour in a different way, a totally new approach than what we’d done before,” says Sara. “Apart from a few shows every year, we had never really focused on just us — particularly in writing.”

BGS caught up with Sean and Sara individually to hear more about how brother sister came together. Read the interview with Sara below, and take a look at Sean’s interview from earlier this week.

BGS: This is your first album as Watkins Family Hour in five years. What made you decide to prioritize this particular project again?

Sara Watkins: The first record that we did was sort of an accident. We made it when our friend offered us some free studio time, just to document what we’d been doing for a while. That record was very natural arrangements to songs that we’d been playing for a long time, cover songs. It was about a year and a half ago when we started talking about doing this record. We were catching up on what we’d each been up to, and as we were talking — I don’t remember who suggested it first — it became clear that we were both really interested in digging into the potential of the Family Hour, but focusing on the core element that’s always been there, which is my brother and me. This record is the first example of our collaboration as co-writers outside of a band format. Maybe as a reaction to the first Family Hour album, but also as a reaction to being in the projects that we’ve been a part of, we wanted to really focus on the potential of this combination.

Is there something specific about writing with a sibling that is either a positive that can’t be replicated, or an obstacle you don’t face with other people?

I think that any time you can be completely honest or you communicate well, it plays to your advantage. I don’t know if it’s sibling-related. For the first twenty-seven years of my life, which was the first twenty years of my musical existence, we shared our musical experience pretty closely. Sean and I have the advantage of a shared foundation — a shared musical foundation, a shared personal foundation — but I think at this point in our lives, what made writing together intriguing is actually how much time we’ve spent apart.

Instrumental tracks are rarely the ones held up as singles or played on the radio, but they’re a huge part of the bluegrass tradition — and something you and Sean do really well. In the writing and recording process, where do you begin in expressing a feeling without lyrics?

Playing instrumentals scratches a specific itch for me. It’s less guaranteed [with an instrumental song] that someone’s gonna get the gist of what you’re saying, but I don’t know that that matters. Even with lyrics, Sean and I have found that we get different things out of the same song — more cynical for him and more optimistic for me, or vice versa. People might hear a lyric completely differently, and that doesn’t make it a failure of expression. Maybe that’s a success.

When I listen to instrumentals, I really enjoy things that I can grab hold of. I enjoy a melody or a hook that comes back around. And I enjoy feeling like I’m along for the ride as a listener: that the person who’s playing is taking me with them. Sometimes you can sense, when someone’s soloing, that they’re also along for the ride — that maybe they don’t know where it’s going. I think a lot of us get that from like a Dave Rawlings solo. That’s really exciting.

So I think that’s the goal, for me: to take the listener, give them enough to hold onto, and invite them along for the ride. When we’re writing an instrumental, we want to try and take somebody’s hand and bring them with us. Otherwise, they’re just listening to a flurry of notes.

The melody and cadence on “Fake Badge, Real Gun” could be just as at home in a pop song. What were you going for when you sat down to record?

Sean has a real knack for melodies that have a pop sensibility. He has a really great way of blending and marrying that with the foundation and the scope of his bluegrass background. I think he’s uniquely good at that. This song is really hard to sing. [Laughs] It’s probably the most challenging song that I sing. Because of where the melody goes in my register, I’m always just singing it with my fingers crossed.

We were consciously trying to satisfy what the song wanted, which was percussion and some low end, but we wanted to give that to the song in a way that didn’t make it feel detached from the record. We kept the drums tight and to one side, and gave it bass that wasn’t too percussive. Then, when we recorded some of the other songs on the record that are much quieter — like the Warren Zevon song, “Accidentally Like a Martyr” — we recorded to tape, and Clay [Blair], who was our mix engineer, hit the take really hard. That means there’s some distortion on the tape, but it gives it a presence that I think matches the intensity of the songs that have a bigger instrumentation.

“Neighborhood Name,” a song about gentrification by Courtney Hartman and Taylor Ashton, is a newer number that you decided to cover on this album. What drew you to it?

It speaks to what a lot of people are aware of and sensitive to right now, as the world is changing and neighborhoods are changing. Some of us don’t know what our place is in that and others are being pretty directly affected. It’s also something that has happened for generations. This song doesn’t put an ethical stamp on it, to my ear, as much as it just speaks to the relatability of the sadness of being displaced. In addition to that, it speaks to the question of wondering if anybody’s gonna remember you — if you made a mark at all. And that’s something that’s always relatable, to everyone.

The song I’ve listened to the most is “The Cure.” What does that song mean to you, specifically the phrase “I avoided the cure, but it found me anyway”? Does it have any special meaning?

Life has a way of being persistent in the lessons that you need to learn. We might procrastinate on things that we know are going to be valuable for us or to start things that might be beneficial. Life pokes and prods in a way that often will bring you to those places, whether you like it or not. It’s a funny thing that a lot of us are so reluctant to do the thing that we know is going to bring us the outcome we’re looking for. It’s a strange but calming phenomenon that I think a lot of us can relate to.

Absolutely. It’s kind of a hopeful message. What’s one thing that has made you feel hopeful recently?

That’s a hard question, not because I’m devoid of hope, but because you could be so pessimistic in so many ways: The resilience of nature gives me hope, but we’re also being so mean to nature, and maybe it’s not going to be resilient forever. One thing that I have been enjoying is a lot of family time lately. I think digging into relationships and feeling the invaluable place that relationships should have in our lives, remembering that, feeling attached to that in a new way has made me hopeful. I feel that there are a lot of people realizing that again, and I think that’s really good for the world.