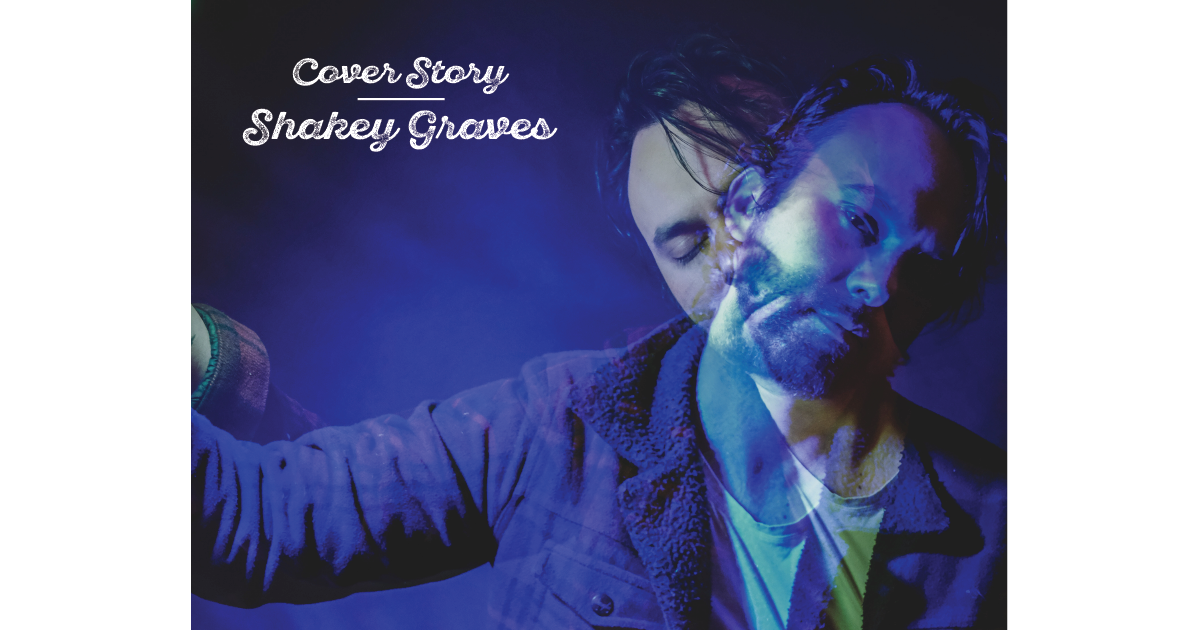 The very first fans to discover Alejandro Rose-Garcia — the musical mind behind the moniker Shakey Graves — admittedly didn’t have much information to go on.

“When I first snuck this record out, it was just a photo of me with a cow head,” recalls Rose-Garcia of his self-released 2011 debut, Roll the Bones. “All it said was Shakey Graves is a gentleman from Texas. It didn’t say whether I was a band or a solo artist. I didn’t promote it. I just let it be and believed in it.”

The album’s no-frills, garage-folk sound attracted a loyal following, varying between down-tempo, ominous poetry about hunting seals in Alaska; lighter, more carefree numbers about driving through Appalachia; and even the lone cover song, an edgy take on a Springsteen classic. In the decade since Roll the Bones’ quiet release, Shakey Graves emerged from the shadows, releasing two full-length albums via Dualtone Records as he built a strong live-performance resume, first as a charismatic busker and later as top billing on festival stages around the world. Still, until recently, Roll the Bones remained available only as a pay-what-you-want release on Bandcamp, its recognition a de facto litmus test for Shakey Graves superfans even as it’s sold more than 100,000 downloads.

“I always had the backs of the people who had the back of this record,” says Rose-Garcia. “Anyone who’s like, ‘Man, I just love that first record so much,’ I’m always like, ‘Me too! We have that in common. That’s our secret we share: me as someone who made it, and you as someone who found it.’”

This month, millions of new listeners have the opportunity to share that secret as Roll the Bones X, a re-issue of those original recordings, hit streaming services and sees a proper vinyl release complete with the bonus companion LP Odds & Ends, a 15-track collection of previously unheard Shakey Graves material from the same era. BGS caught up with Rose-Garcia to talk about the impact of this release on his development as an artist, how the songs’ meanings have evolved (or not) over the years, and his most cherished online feedback.

BGS: This album has been available for years on Bandcamp. What inspired you to release Roll the Bones in this new, wider way — and with so much additional material alongside it?

Rose-Garcia: It’s been really important to me that I put the record out for pay-what-you-want just on Bandcamp for all these years. It wasn’t on any digital streaming platforms. That was a pretty stubborn point I had, but I feel like I got to hold my ground with that. Now, I want more people to be able to hear it if they want to. My time of being so precious with it has run its course. When we put out “Roll the Bones” as a single, people kept being like, “Wow! Cool remix, but I really prefer the original.” [Laughs] The first version of “Roll the Bones” people usually hear is the live Audiotree version, so it’s a pretty common thing to hear. People say, “Cool, but it doesn’t hit quite like the OG!” I’m like, “Well, this is the OG…” Still, I’m also flattered that some people think that I just recorded it — that somehow it still sounds modern enough.

At the point that I put this out, nothing had really happened for me, musically, at all. [Laughs] I believed in myself, and I really liked this record when I made it: I was very proud of it, and I still am. Of all the records that I’ve made, it’s probably the only one that I go back to and listen to every once in a while. I can hear myself not answering to anybody and kind of shouting into the void –being like, ahh, well if this doesn’t work out, then maybe I’ll just live under a bridge somewhere! Now it’s the future, and in a way, it did work out. Nothing ever works out exactly the way you think it will, for better and for worse, but this sweet little bedroom folk record seems prescient somehow. It wants to come out, so I’m just gonna go ahead and let it.

As you mentioned, you’ve recorded different versions of several of these songs over the years. Fans can see when a song evolves in how you play it: They can tell when you strip it down or tweak a lyric or add new harmonies or whatever. But is there anything on this record that has evolved in its meaning to you, over the last ten years?

I remember reading fan theories about “Roll the Bones” — random people being like, “I’m pretty sure that this is what this song is about” — and I can neither confirm nor deny anything.

When I was 17, 18 or so, I had a manic episode and went to a mental institution for a little bit. I’d basically had this big matrix moment where I was like, oh-my-God-nothing’s-real-everything’s-real-oh-shit. A lot of those things ended up not being reality, but there were other things, too. I was like, I’m gonna be a musician! I’m gonna save the world! I started drawing that skull logo, with the arrow through it. My family and friends, for a little while there, were like, “Well, maybe you’ll just be crazy forever, and you won’t do anything.” And even I was sort of like, “Maybe I’ll be crazy forever and none of this is anything.” But now, in the future, there are people who have that [skull logo] tattooed on their bodies. And when I play that song, I can still hear a little bit of the crazy and the mystery that I found, that kind of started me on this thing. 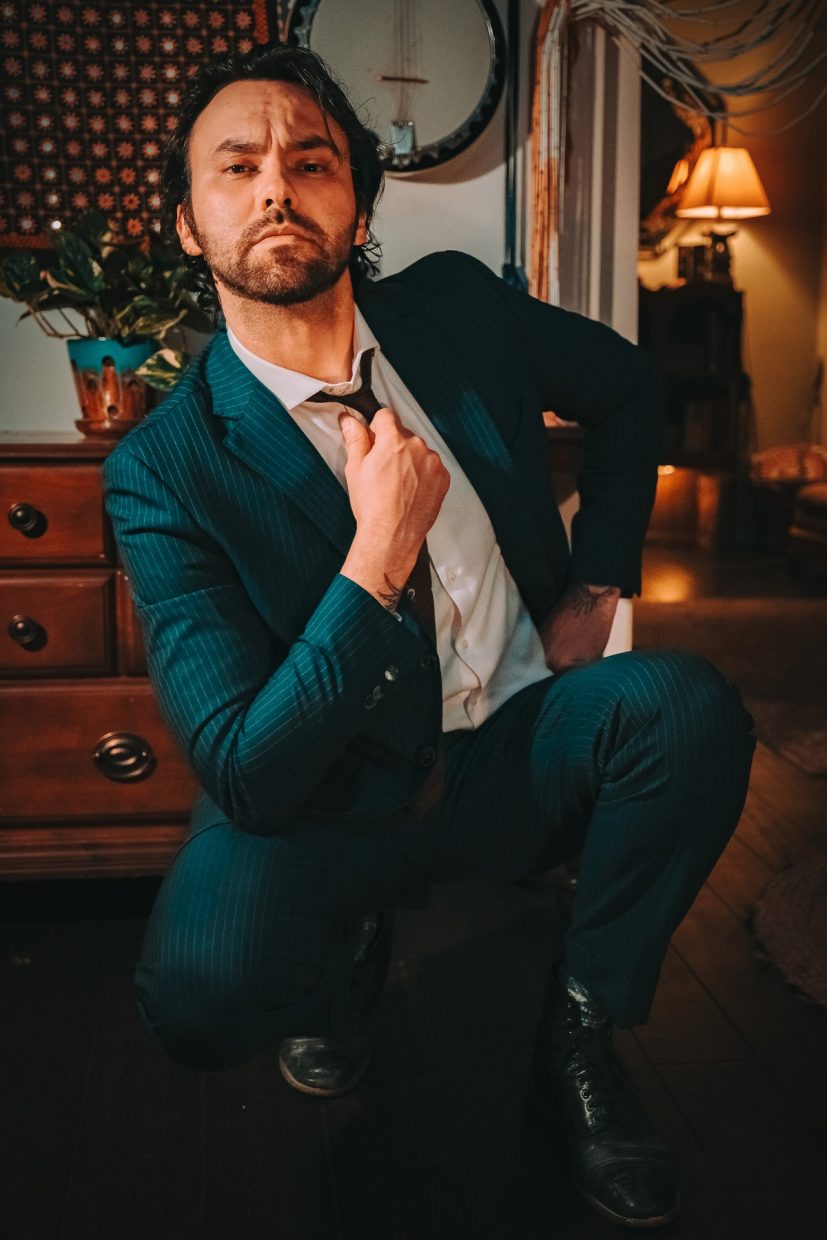 So the song is still pretty mysterious, even to you.

I feel confident as the owner of that song, but I still don’t know what it means. [Laughs] So it’s maybe the opposite of your question: That’s been a constant. But this record did freeze-frame a lot of stuff. “Built to Roam” was a song about me wanting so badly to just escape around the United States, and it was a wish that came true. That’s just what happened to me: For the rest of my life, until this whole pandemic, all I did was travel around and live my dreams. I’m almost like, is this whole record just like a big spell that I put on? Some sort of big prayer-slash-witchcraft deal? Like, this is what I want for myself — and then it came true?

Another one that maybe answers your question more directly, is “To Cure What Ails,” the last song on the [original] record. I wrote it about the first girl that I had ever been in a serious relationship with, and you know, it fell apart in the middle of the writing of it. Half the song was me being like, “You suck!” And midway through the song, I kind of started writing this fantasy: “Maybe I’ll circle back around you’ll be there. I can’t help it. Maybe this is how it’s gonna go down.”

And now when I hear that song, I mean … I haven’t seen that person in so long. She’s the last person I would want to just magically appear. [Laughs] But what I actually hear in that song is that throughout whatever the rest of the album’s talking about, in the end, all of it is just about that need we all have to be loved — by anyone, by somebody, even just for a second. Even just being loved by yourself. “All roads lead to you,” that whole thing? Sometimes I hear that and I don’t even think of another person anymore: I think of it as you finding yourself one day.

What do you hope new listeners will take away from this album?

Playing music comes hand in hand with crippling anxiety about everything: “Am I doing the right thing?” What I hope people hear is a kid who felt the same way and put something out that he didn’t ever think anybody was gonna listen to. I don’t want to overthink it. My favorite review that I’ve seen of it so far was just some dude on Bandcamp that was like, “I listened to this record while tripping on acid in the back of my friend’s van, and it changed my life.” That’s all I want you to do: Do something stupid and put this on in the background, and let it become part of the story of your life.