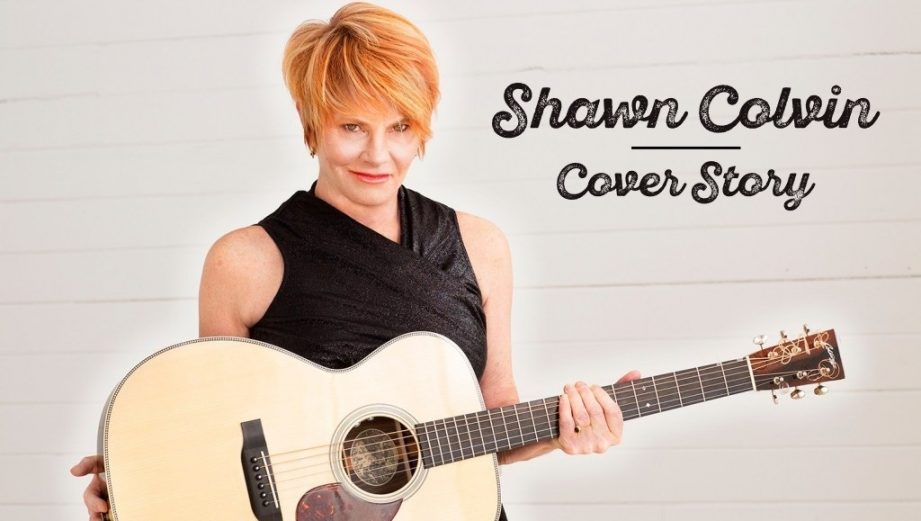 Shawn Colvin’s new album will be intimately familiar to fans who have loved her from the start. To commemorate the 30th anniversary of her landmark debut album, Steady On, Colvin re-recorded the full album acoustically – and she’s posing on the cover with the same guitar strap she wore on the back of the original packaging, too.

Since her auspicious arrival on the scene, Colvin has sold millions of albums and won multiple Grammys, including her first one for Steady On, in the category of Best Contemporary Folk Recording. If you’ve seen her perform over the last 30 years, you’ve certainly heard these songs — “Shotgun Down the Avalanche,” “Diamond in the Rough,” and “Ricochet in Time,” among them. She invited BGS for a hotel room conversation while she was in Nashville for AmericanaFest, where she’s performing the album in its entirety.

BGS: When you went into these sessions, were you hoping to capture a certain sound for this version of Steady On?

SC: No, just an acoustic tone, a stripped-down, non-produced, sort of bare-bones rendition of the songs.

Because you’re so familiar with these songs, were you able to work pretty quickly?

Even though I co-wrote a lot of them with John Leventhal, he would give me pieces of production and I thought, the way I need to figure out how to write is to strip all this production down to just me and a guitar. Almost every song on the record began that way. I stripped it down. It’s the beginning of what became the produced version of Steady On.

I was curious if you wrote most of those songs on the same guitar.

What is it about that guitar that suits you so well?

How many songs had you written up into the songs that were on Steady On?

Wow. So these are some of your earliest songs.

Well, I wasn’t really a songwriter. I wanted to be and I practiced at it, writing lyrics to John’s fully-produced pieces, which were really pop. And I love pop music, but I wasn’t very good at writing lyrics to it. You know, my heroes were all singer-songwriters from the late ‘60s and early ‘70s, Joni Mitchell in particular. Very personal stuff, and that’s not what I had been writing. I realized, I think I have my own story to tell and I opened up to that and then I liked what I was doing.

Were you living in New York at the time?

How did that city shape you as an artist, do you think?

Oh gosh, the city shaped me personally and artistically in a huge way. I underwent a lot of personal changes there, a lot of growing up, a lot of waking up. It’s a dose, as Levon Helm said in The Last Waltz. But I met people I’m still friends with to this day that really nurtured me in my 20s and helped me grow up. My best friend Stokes is still there in New York that I met in 1980. And the music scene was so rich!

I started out in Buddy Miller’s country band. That’s how I got to New York. He hired me to come sing because Julie had left the band. And he needed another, what we called then, girl singer. So I was in a band like that. I played solo acoustic at places like The Cottonwood Cafe and The Bitter End and I did anything I could make a buck at. I was also in a country band with Soozie Tyrell. I did rockabilly bands.

We were just putting together bands piecemeal, you know “Hey, can you make this gig?” Everybody was up for whatever, all the musicians, and you cobbled together a band from gig to gig, whatever you could get, just whatever we could do. So I learned a lot. I played a lot, which is part of my advice to anybody who might want it,who is a young up-and-comer. Play live. Just do it and do it and do it, you know? I think it makes you confident and good and better your craft and you learn. You’re a student.

What was your live show like at that time? Was it just you and the Martin, singing solo acoustic?

You were never intimidated by that?

What do you mean?

When I was doing bar bands four hours a night in the city, sometimes they did. That was the goal, to play well enough that maybe someone would listen. It’s where I developed this percussive guitar style that I have, because I thought, what can I do to make it sound like more instruments and do something a little bit different? So I made more noise that way. Sort of a rhythmic thing.

I think of that as your signature sound because I haven’t seen a lot of artists doing that.

I started to make a name for myself a little bit down the Eastern seaboard, Cambridge and DC, New York, and some other areas in Massachusetts, and Philadelphia. So I was getting finally to play listening rooms rather than bars. I had a little bit of a draw. I got to go on college radio stations and they would play cassettes of mine. It was really helpful, especially in Cambridge, so I got some fans that way that weren’t just the New York people. Then when I put out the record, I wasn’t prepared it for what was going to happen. It was on Columbia Records and it was time for the big push. I’m like, “Sure, no problem.” And it was a grassroots global push. So that meant drive-time and morning radio shows, if they’d have me.

And God bless the label reps in all these different cities, which you don’t have anymore. Their job was to take you around the radio and try to get them to listen to you. And they had a reputation so they could usually get you in. Whether the radio station was really interested or not was always sort of up in the air. And then I would do press, anybody that would talk to me, a magazine and a paper — local, big, small, whatever, other radio if I could — and then I’d do a show at night. Sometimes there were 10 people. And I did that a lot. It was a groundswell, I guess you could call it. Radio stations did start picking up songs from the album. And next thing you know, I’d go back to a town like Boulder and people would come.

That is grassroots for real.

Oh yeah, for real. But you know, those people that have been with me from the beginning have stayed. I have a loyal following. It’s fantastic, yeah.

When Steady On was released in 1989, how did you define success at that time? What did success mean to you?

I remember being in Boulder and I had a day off and I like to ski. I was in a rental car and I was driving to… I can’t remember if it was Keystone, someplace close to Boulder, and I heard myself on the radio and I almost went off the road. That was to me a measure of success. Then the Grammy Award of course was pretty cool. Who could have thought that up?

How do you define success now?

I’d say first and foremost, if I write a song that I like, that’s the best feeling. It’s gotten harder to do for me. There’s less time, because there’s so much roadwork. Less drama in my life, to force me to the paper. There’s really not a better feeling than finishing a song. Writing is hard, but the fact that I can still sell tickets, that’s success to me. Not everybody’s in that position. I think those two things — and I can still do it. Physically I can still play and sing as well, in my opinion, as I ever have. So it’s kind of longevity and luck.