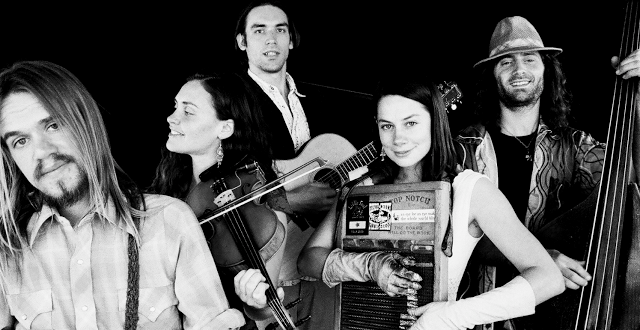 Butthe question remains: Well, what is time? /  It’s when the sun comes up, the sun goes down, the mooncomes out / People dance all around.

This Los Angeles winter has been rather mild.  We’ve had a few beach-worthy afternoonswith the occasional jacket in the evening.  But come this Thursday night at The Mint, I’m forecasting aRocky Mountain breeze, a full moon and perhaps some snow flurries.  Elephant Revival, the captain of the newly coined “Transcendental Folk” movement, iscoming back to the west coast.

Embarking on a winter tour in select cities, ElephantRevival is playing at their very best. The Colorado quintet dabbles in many genres: bluegrass, Americana,psychedelic folk, country, and the list continues.  They’ll hit you with five part harmonies in one song andfollow it with a Scottish fiddle instrumental with the next one.  Folk ballads, old-time standards or bluesjams exploding with strings; Elephant Revival is a refreshing take on the rootsmusic scene.

I asked Dango Rose (double-bass, mandolin, banjo) whatexactly is so special about their home base of Nederland, Colorado.  Nederland has basically served as astring-picking finishing school, and hosts NedFest, one of the best annualmusic festivals in the country.  Rosewrites via email,

It all began with The CaribouStudios back in the mid-70s to early 80s, which drew many bands to the area forits ‘destination studio’ allure that was within driving distance to the oldStapleton Airport.  Many musicians including Stephen Stills, ChrisHillman, Dan Fogelberg, Steve Walsh, et al… [Musicians] moved to the regionbecause the music scene was thriving without compromising quality oflife…  The local pubs in town becameinundated with world-class rockers and like in Field of Dreams, the ‘If you build it, they will come’ mantra wasin full effect…  The studio closed down in 1984.   It wasn’t longafter that bands began sprouting up in the area and acts such as LeftoverSalmon, String Cheese Incident and Yonder Mountain String Band.  It continues to be a Mecca of musicbecause of it’s high quality of mountain living that is within close drivingproximity to the world music markets of Boulder and Denver.

Rose’s mention of Leftover Salmon, String Cheese Incidentand YMSB are just a few examples of world class musicians playing aroundBoulder County.  After recording asensational self-titled debut in 2008, Elephant Revival now belongs in thisgreat company.  Turn on NPR or anyAmericana station and one is likely to hear “Ring Around the Moon”, arguablythe band’s most popular tune. However, it’s their rendition of Patsy Reid’s “Single Beds Are Made ForOne” that truly stands out on this album. Fiddler Bridget Law gently lulls usinto a melody inspired by a Swedish waltz only to bring down the house with aquick tempo change.  If you want tohear a fiddle arrangement on fire, lend your ears to “Single Beds Are Made forOne.”

In 2010, Elephant Revival recorded Break in the Clouds, and the music only got better.  Songs like “Point of You” and “Drop”demonstrate the phenomenal vocal lead from multi-instrumentalist BonniePaine.  Paine has often beencompared to 10,000 Maniacs singer, Natalie Merchant.  It’s a fair comparison, but try to imagineMerchant’s 1995 hit album Tigerlilywith a bombardment of somber strings and “Carnival” retitled something closerto  “Haunted House.”  Paine’s amazing voice isn’t her onlycontribution to the band.  Alongwith her washboard, Paine can also rock the djembe and even the musicalsaw.  While Paine sings themajority of Elephant Revival tunes, each member is capable of a greatharmony.  “Cosmic Pulse” featuresSage Cook (guitar, electric banjo) leading the vocal charge, and one can hearsome similarities to Ray LaMontagne.

Elephant Revival is looking forward to getting back into thestudio.  Rose explains:

We are very excited aboutheading into the studio for a more live acoustic sounding album.  It may include a small studio audienceto add to the ambiance and energy of the recordings.  We are looking tosimplify the process while capturing the essence of our live performance andacoustic dynamics in a professional studio.

The band will certainly deliver another outstanding effort,but they are excited to be touring for now.  Rose concludes,  “We are psyched about the new music we’ve coalesced withduring our short winter hibernation in the Colorado hills.  It alwayspromotes good energy to play new tunes… which also breathes new life into theold.”

After some consideration, I’m not going to promise a snowyColorado evening in LA on Thursday night. However, I will guarantee some outstanding Colorado folk music.  You have my word.

Elephant Revival plays The Mint at 10 pm on Thursday, January 19th.  Openers include Blind Willies and TheShow Ponies.  You can find about more about the band and their music at their website: http://elephantrevival.com/.