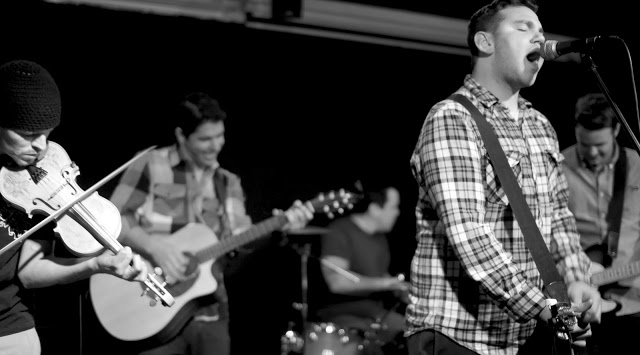 Ahoy, Southland Mateys!  BGLA columnist Brian Hepp here.  Dark clouds areon the horizon, and a pirate ship of punked-out Irish-folk mayhem is sailingthe Pacific coast.  It’s the sortof folk music that will smack you in the mouth but leave you begging for more.  Borrowing a classic line from a seashanty, I urge you, “Come, all ye bold seafaring men.”  Hoist the Colors, the folk-rock piratesof the South Bay, are dropping their anchor at Saint Rocke in Hermosa Beach onWednesday, January 11th.

Thereis a blend of punk, Irish folk, bluegrass, and the twisted Americana that Hoistthe Colors performs.  The seven-pieceband has been building a steady following of fans prepared to sing along, dance,and embrace the chaotic live shows. Their name derives from a phrase used by pirates to intimidate theirenemies or warn of an attack. Electric guitarist Jeff Murphy cites The Pogues, The Misfits, and TheBouncing Souls as some of their influences.  Additionally, the ocean serves as a source ofinspiration.  Murphy explains,

“Most of us grew up in El Segundo so we were fortunateenough to be near the ocean, and in a way it’s shaped our approach to music andsongwriting.  The ocean is such acomplex symbol, since people first encountered it really. It’s come torepresent danger, freedom, new beginnings, hope, loss, insurmountable distance- all at once. So far it’s proven to be a useful referent to convey whatwe’re trying to communicate in many of our songs.”

Whiletypical shows feature electric guitar and drums as the centerpiece, the boysare going all acoustic on Wednesday night.  Although we can expect to hear some traditional Irishcovers, there will likely be some emphasis on Second City, their newest album.  Murphy adds, “In a stripped down setting,there’s nothing really to hide behind – the songs will have to sink or swim ontheir own. It will also be a chance for the mandolin, fiddle, and banjo to befront and center and really shine. It’s a little nerve-wracking, but we’repsyched about it.”

So this Wednesday, come join your BluegrassLA friends for this wild acousticshow.  As Murphy promises, “For peoplewho have seen us, you’re in for something totally new; for those who haven’tseen us before, get ready for a good time.  And as always, be ready to dance!”

Hoist the Colors play Saint Rocke in Hermosa Beach at 10pm on this Wednesday, January 11.  You can find out more about them through their Facebook page here.