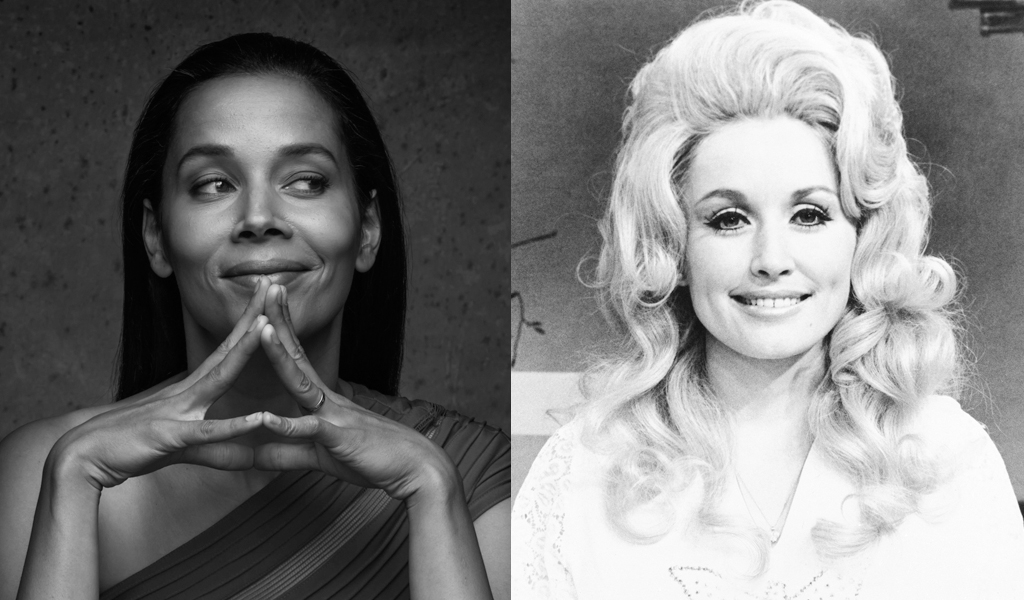 Dolly Parton turns 70 in January. And, while that might seem impossible, it takes that span of time to accomplish all that she has over the course of her various careers as a songwriter, a singer, an actress, and a businesswoman.

Rising out of the ashes of unspeakable poverty in east Tennessee, Parton blazed a trail like none other. From her early days with Porter Wagoner through her unrivaled run in the '70s and '80s to her artistic eclecticism of the '90s to today, Parton has composed more than 3,000 songs (by her own admission), charted 42 Top 10 country albums, and garnered more awards than anyone can count. She even has a TV movie of her life, Coat of Many Colors, slated for release in December.

In contrast, Rhiannon Giddens emerged only a decade ago as part of the Carolina Chocolate Drops after studying opera at Oberlin Conservatory. Though the Drops were known for their passion for and handling of old-time music, Giddens has taken a different tack with her solo debut, Tomorrow Is My Turn, and her guest appearance on Lost on the River: The New Basement Tapes. But, with everything she does, Giddens keeps one eye on the past and one eye on the now.

I gotta say … for whatever reason, I thought your pick would be maybe a little less polished — like Hazel and Alice or Ola Belle Reed or somebody like that. So why Dolly?

Well … I'm kind of obsessed with her right now. I guess I've been focused so much on the non-commercial parts of country music and old-time music — you know the Ola Belle Reeds and the Hazel and Alices. I love that so much, but as of now, I'm a more commercial artist. I'm not making CDs while doing something else. It's what I do for a living and I've had a bit of radio play. So I've been really thinking about what Dolly did — and she still does. I mean, she's not writing as much as she was. She definitely had a golden period of songwriting.

The thing that fascinates me about her is how she worked feminism into pop songs. That's kind of what I'm fascinated with right now because, as I look at being a songwriter myself, as I've developed over the last couple of years as a songwriter with definite activist urges, wanting to figure out how to say things while making them effective to as many people as possible … I've been really digging into her early stuff and been kind of amazed at the strength of writing and the really strong feminist themes wrapped up with this sort of smile. I've just been kind of fascinated with it. I've been talking about her every night because I do one of her songs in my show.

So according to the Gospel of Wikipedia, she has written more than 3,000 songs over the span of her career. What does it take to hit a milestone like that?

I mean … what I think is … of course, you'd have to ask her to get the answer. You can't pull all of that … I mean, you can pull all of that from yourself. But I think you'd probably go crazy in the process. I think you have to observe and see what's happening to other people, find things to write about that maybe nobody else ever thought of. If you're really engaged with life, you see that. That's what I think.

Yeah, it seems like the level of empathy that she must have — especially coming from … it's crazy to think of where she came from and where she is now. She's the most honored female country artist in history … and so much more.

I was reading that she got some early words of encouragement from Johnny Cash, then the gig with Porter Wagoner, and off she went. Now here we are 50 years later.

And, still, you think about how she's written that many songs and yet, is she known as a songwriter?

I know. She's not. And I think part of that's her image. That is sort of the image that she's put out there. I still think people have a hard time seeing a pretty smile and a pretty voice, and they have a hard time connecting that she has a razor-sharp brain … and those songs!

Yeah, you don't get where you are — where she is — by not having the razor-sharp brain.

She is so freaking smart. Oh my God! She's such an inspiration. Just watching what she's done with her career, how she's taken care of her family and people at home … how she's all-successful. Stuff doesn't come up and then collapse, you know? Books for children all over the world? And she does it all without fanfare.

Oh, that would be a sad loss! There are people out there who can write but can hardly sing. But her voice is beautiful. Her phrasing's gorgeous. She's such a great performer and a great actress. She's a real triple threat. There are not many of those out there, really, where each thing is just as great as the other.

She's also — even just within music, taking aside Dollywood and acting — she's had so many different musical lives, as it were. I'm a child of the '70s, so I have to confess to loving 9 to 5 and Best Little Whorehouse in Texas … that was my childhood.

But your favorite era is the early stuff? Which cuts?

Right now, I'm obsessed with the early stuff. There's one record that's got a ton of stuff on it … which isn't really fair because I have a bunch of songs on my iPod, but … "A Little Bit Slow to Catch On," "Just Because I'm a Woman," "I'll Oilwells Love You." I've been writing all the lyrics down, studying how she does this stuff. "The Only Way Out (Is to Walk Over Me)" … just so good! That's the stuff that's not known, in addition to “Jolene” and "Coat of Many Colors" and that kind of stuff … you know, "9 to 5."

I first was introduced to her through her second bluegrass record, Little Sparrow. That was the first time I really … I had seen that stuff growing up, and I knew “9 to 5,” but the first time I really got a sense of Dolly as an artist was Little Sparrow. I loved it. I thought it was beautiful. One of my first introductions to old-time music was actually at the end of "Marry Me" — there's this like little old-time jam that kind of fades off. And I was like, "That sounds so good!" It's funny to think about that, before I knew about old-time or anything.

Everything old is new again, I guess.