The Show On The Road – Mary Gauthier 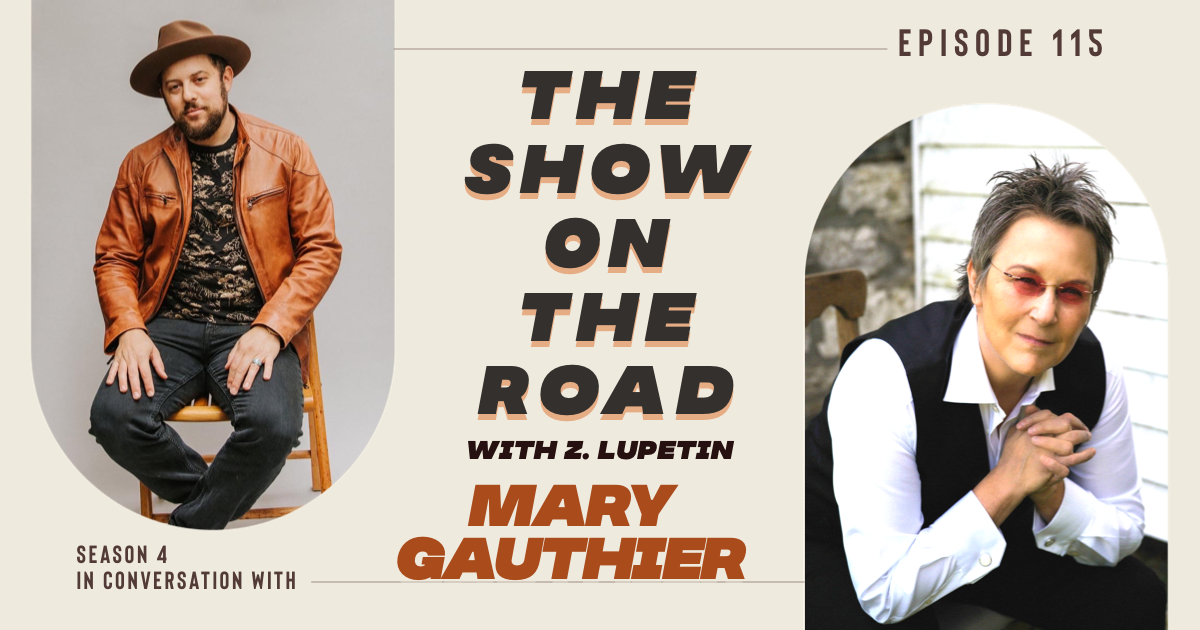 This week, the show dials into the Nashville studio of one of the most gifted songwriters and empathic storytellers of her generation: Mary Gauthier. While Mary has become known for her darkly honest tales of overcoming addiction and seeking truth and joy after overcoming her troubled upbringing in Louisiana, she was nominated for a Grammy for her devastating record Rifles & Rosary Beads (co-written with U.S. veterans and their loved-ones), and her new record may be her most surprising and moving collection yet.

Dark Enough to See the Stars, which drops June 3 on Thirty Tigers, is in many ways an unabashed romance album — celebrating, in her own sardonic John Prine-meets-Anthony Bourdain style, how lovely it can be to find true love and creative joy at long last.

During the pandemic she began performing a weekly stream called Sundays With Mary with her amor — the talented songwriter Jaimee Harris — and while Gauthier has now returned to the road, the cathartic weekly song sharing show has continued, too. Harris helped write the swoon-worthy traveling song “Amsterdam” on the newest LP.

Gauthier’s road to stability and creative contentment was a long one. As she gamely explains in this intense conversation, she made the leap to leave the relentless life of being a cook and restaurant owner (and partaker in too many illegal substances) and devoted herself to songwriting after getting arrested at thirty. Was she an instant hit on folk stages in her then base of Boston? Not exactly. In fact, she couldn’t step on any stage without shaking. But she kept at it and the stories flowed. Early tours with Prine gave her confidence. Her breakout record Mercy Now (2005) chronicles her technicolor debauched early years with the clear-eyed grace of the newly sober, trying to give forgiveness to her troubled family and to herself for making it through. Being an openly gay songwriter, she took early inspiration from her heroes the Indigo Girls who showed her there was a place for a new kind of empowered songwriting — not just for women, but for anyone who wanted to look deeper into what women are experiencing behind closed doors.

If Gauthier has one superpower as a songwriter it’s her ability to empathize with everyone around her — even the troubled soldiers who she teamed up with on Rifles & Rosary Beads. We have way more in common with each other than many may think, and overcoming trauma is pretty damn universal. Her book Saved by a Song: The Art and Healing Power of Songwriting is her most powerful collection of stories, and may explain best how her art has evolved in the last two decades, plus on the road.