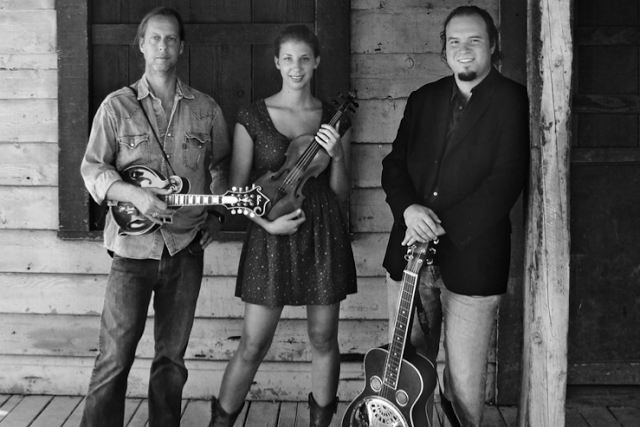 The South Bay’s own Rocky Neck Bluegrass Band is having a really exciting year.  Not only are they playing the hottest bluegrass and country venues in and around LA, but the band also released their self-titled debut album back in November, and makes their debut at downtown Villains Tavern this week.   Fiddle player Lydia Veilleux and mando/lead vocalist Devitt Feeley sat down with me at the Wellsbourne on West Pico for some conversation and — for Devitt — a special occasion scotch (the band also consists of guitarist Craig Ferguson and bassist Brian Netzley).

Whatis your origin as a bluegrass band?

Lydia:  Devitt and Craigplayed together in Cliff Wagoner and Old #7.  I met Craig at a Make a Wish benefit, and the three of usreally banded together to create something more traditionally bluegrass… weall wanted to play more festivals.
I grew up in Maine playing traditional Cape Breton style fiddle.  It wasn’t until college that I reallystarted playing real bluegrass. That’s what all the cool fiddle kids were doing.

Devitt: It’s just always been part of my musical makeup, with everythingelse… rock and blues and jazz andclassical and bluegrass.

Lydia:  We got Brian in theband about a year ago– our bass player– he’s now our go-to guy.   And we just found out he can singtoo!

Devitt:  You know how bassplayers are… they’re coy… full of surprises.

Lydia:  I think Craig gotinto bluegrass in college at Berklee, but he has more of a jazz background.

Whatis it that brought you to LA?

Devitt:  Buddy of mine wasplaying guitar and invited me to play in his band.  It was pretty simple: chasing music dreams.

Lydia:  After college Iassumed I would move to LA, NY or Nashville, but my husband composes filmmusic, so LA it was…..

Howdo you describe the music that Rocky Neck plays?

Devitt:  I’d say we’re primarily a bluegrassband, but these days there are so many hats you can wear underthat title.

Devitt:  We do not have abanjo player, but one of the greatest bluegrass bands of all time, The TonyRice Unit, almost never had a banjo player, so…  you know, thank goodness for those seventies and eightiesguys who played acoustic and bluegrass music… they broke a lot of thoseboundaries for us.

But you know, when it comes down to it, we’rean acoustic band that mostly plays bluegrass.  So many other genres of music have let listeners down,but acoustic music means you at least have to know how to play your music alittle, and quite honestly, listeners are just more intelligent than they weretwenty years ago.

Whatare your favorite venues to play in LA, or in southern California in general?

Lydia:  I love the Cinema Bar.  It’s an interactiveaudience.  I also like when we playPeter Strauss Ranch— an appreciative audience, beautiful venue, where we canactually hear ourselves play!

Lydia:  Amoeba, becausethey’re carrying our record!  Also,Angeles on Pico for my violins.

Devitt:  I’ve been in musicretail on and off since 1986–I always like to support the Ma and Pa storesrather than the big chains.

Lydia:  I like BoulevardMusic on Sepulveda too.  Always great.

Devitt:  Well if it’s not aglass of water, on special occasions I’ll have a scotch.  Craig and Brian are beer snobs though.  I’ve actually never had a beer in mylife.  Seriously.  Water or whiskey.

Ifyou didn’t live in Los Angeles, where would you be based?

Devitt:  I would be in westernNorth Carolina.  Tepidclimate.  Great music.  I go to MerleFest there every year.  I love it.

Whatdecade would you rather live in?

Devitt:  If I didn’t go backto some cool decade in the past hundred years, I’d go all the way back to the minstrel days.  You played for your food, you wrotemusic about the people you were staying with, you know.  That’s pretty cool.

Whatwould be your final meal in Los Angeles?

Lydia:  Linguini with pinksauce from Mama D’s in Hermosa Beach.

Devitt:  I kinda became aveggie about a year ago, but if it’s my last meal it might as well go for itright?  I’d say a caesar salad withcoconut shrimp.  No dressing.  I don’t care from where.  Just so long as I can have it on thebeach.  I might be the blandestbluegrass musician in Southern California.

Rocky Neck Bluegrass Band’s debut album was recordedin a hundred-year-old cabin in Big Bear. The five song EP is currently available on iTunes, Amazon, and at Amoebamusic on Sunset in LA.  Check out more about them at http://www.rockyneckbluegrass.com/.