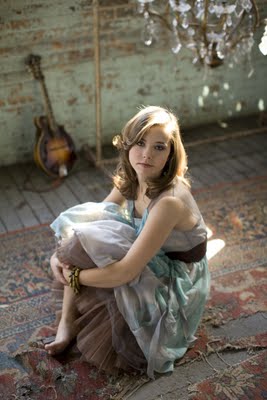 Anyone who has any kind of pulse on the modern bluegrass scene has heard the name Sierra Hull mentioned more than a few times over the past ten years, which amazingly is over half her lifetime.  This mandolin-playing wonder started when she was just seven years old, and at 11 was asked by Alison Krauss to join her onstage at the Grand Ol’ Opry.  She’s continued to tour and develop as an artist ever since, and this year released her second album, Daybreak (all while attending Berklee College of Music in Boston no less, where she’s the first bluegrass musician to receive a Presidential Scholarship there… how she manages to record and tour amidst term papers, tests, and university life is beyond me….).  Last week, Sierra and her band Highway 111 played Hollywood’s Hotel Cafe (where one of her favorite musicians–Sara Bareilles–got her start) and we talked about her first time performing in LA…

WELCOME TO LOS ANGELES!  IS THIS YOUR FIRST TIME IN THE CITY?

Sierra:  Well, it’s my first time playing in LA, but not my first time being here.  We played out in California last summer for a few dates and stopped by to do some sightseeing– went to the beach, that kind of thing.  But Christian [Ward, Hull’s fiddle player], he’s from out here so he probably knows it better than I do.

Christian:  Actually I grew up in Apple Valley, California, so I’ve been to LA a few times, but this is my first time playing here.

WHAT’S YOUR FAVORITE PART OF THE CITY?

Sierra:  Gosh I don’t even know– I feel like I haven’t even been here enough to have a favorite!  I love walking down Sunset Blvd and just taking it all in I guess.

Jacob:  Hanging around Hollywood in general…

Sierra:  Ooh–remember last time we were here?  We went to Huntington Beach.  It was so nice but we got SO burned.  We all looked ridiculous at our show the next day.

SO HOW DID YOU START PLAYING MANDOLIN?

Sierra:  I grew up singing in church.  My dad played guitar and he bought a mandolin when I was seven.  We always had instruments around the house.  He tried to get me started on the fiddle, but the full size fiddle was too big so I took to mandolin instead.  [What I’ve accomplished] doesn’t happen overnight.  I’m 19 now–it took many years to practice and work on it–playing local festivals–going further and further from home.  But really it’s all been about working hard and being career minded.

WHAT ABOUT THE REST OF THE BAND?

Sierra:  Well, I met my whole band through different festivals.  Being on that circuit really expands your fan base.  But I’ve had my band for 2 1/2 years now.

Christian:  After high school, I really didn’t need to stay in Cali.  I got in my car and drove east.  Bluegrass region.  I had visited Nashville several times before.  But that’s the place to be for what I want to do.

Jacob:  I played music with my dad and brother and grew up in a very rural part of the state.  I met Sierra several times at festivals and events before she asked me to join the band.

YOU SPEND SO MUCH TIME ON THE ROAD–WHAT ARE YOUR TOUR ESSENTIALS?

Jacob:  Biggest thing for me is my phone.  I’ve left behind or forgotten everything else at some point on the road.

Sierra:  All that girly stuff the guys don’t have to deal with.

Sierra:  We didn’t drink it until we started touring with him!

WHAT IS YOUR FAVORITE VENUE?

Christian:  Out here I’d say it’s Largo at the Coronet… I went to the LA Bluegrass Situation out there and it’s such a great space with so many amazing artists playing.

WHAT ARE YOUR BIGGEST MUSICAL INFLUENCES?

Sierra:  Well Alison Krauss obviously.  And Sara Barielles–she is one of my favorites.

Jacob:  Dylan’s new to me– Christian really got me introduced to him.  But I love the blues.  And anything from Stevie Ray Vaughn to John Mayer.

YOU JUST PLAYED LIVE OAK MUSIC FESTIVAL IN SANTA BARBARA.  WHAT WAS THAT LIKE?

Sierra:  Oh gosh, they had a great set up– especially backstage!  That festival is the product of a lot of effort and a lot of passion.  It was a great day when we were there.

Jacob:  It’s really cool to get to play a festival like that.  [Live Oak is] outside the bluegrass festival circuit, so you’re introduced to totally different artists that you’re used to seeing.  And you’re playing for people who haven’t been listening to bluegrass all day.  It’s a nice change.

WHAT’S NEXT FOR YOU?

Sierra:  We’re about to head to Amoeba Music!  It’s my first time there but I’ve been hearing all about it.  I can’t wait!

Sierra Hull & Highway 111 continue to tour all summer.  You can find out more at http://www.sierrahull.com.