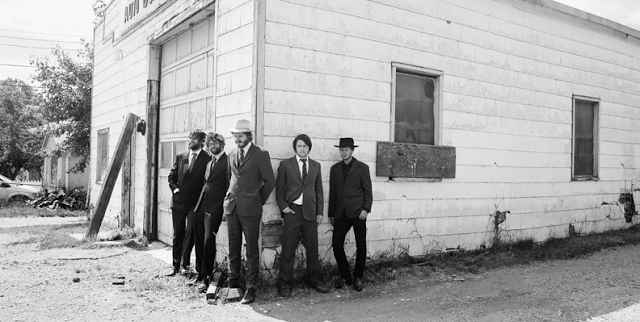 “It’s a long way to Georgia.  Long way to South California.
It’s hard to get to heaven on that wicked path of sin.”
-‘Two Time Loser’ by The Deep Dark Woods

What a year it’s been for the folk-rock scene, and it’s not over yet.  If you enjoyed The Fleet Foxes’ Helplessness Blues, Boy & Bear’s Moonfire,or Other Lives’ Tamer Animals, then lend your ears to The Deep Dark Woods. Fresh off their recent tour with Robert Earl Keen and promoting their newest album, The Place I Left Behind,The Deep Dark Woods return to Los Angeles to play The Satellite and The Hotel Cafe.

Think about it: The Deep Dark Woods.  The name just sounds freezing.  It’s the kind of name that requires a blanket and thoughtful listening of tales told by campfires deep in the deep dark woods.  The Canadian folk /roots-rock quintet is back in Los Angeles for their second visit, and these cold Santa Ana winds seem to be welcoming their sound with open arms.  I’ll take that blanket because I’m not missing this show.

BGLA’s own Amy Reitnouer spoke to lead guitarist/vocalist Ryan Boldt prior to their arrival in our fair city.  Here’s what he had to say…

What is your musical background personally and as a band?

Ryan:  I started playing guitar around age 12 or so.  I was really into country and folk music… then right after high school really got in to bluegrass.  Played in a couple bands before meeting up with these guys.  We all met either in high school or summer camp.

Who are your biggest musical influences?

Ryan:  I love the Stanley Brothers.  When it comes to songwriting I love bluegrass and folk songs… English ballads… and Bob Dylan.   He is my favorite songwriter.  I love the Band quitea bit.  Neil Young also is in therefor sure.

Growing up, my dad really loved BBKing and the blues…. That was really the only thing playing in the house.  Then I discovered other blues and folk guys on my own like Mississippi John Hurt, which lead me to really finding Dylan and the Dead and the classic songs they covered.

Can you describe The Deep Dark Woods’ sound?

Ryan:  It’s rock and roll when it comes down to it, but we love bluegrass and folk and country so it ends up being a mixture of all that stuff.  We just put all of our favorite things together.  And we’ve been doing that justabout seven years now.

What are you most looking forward to in California?

Ryan:  We’ve only played LA once before… came down for a show at Hotel Cafe [where they will return on Monday night, December 6].  Personally, I cannot wait for the hot hot weather.  It’s a little warmer there than it is at home [in Saskatoon].  That and Roscoe’s chicken and waffles.

What are your favorite music stores in LA?

Ryan:  We went to Amoeba on our last visit here and are definitely going back.  I found records and vinyl there I’ve never found anywhere else.

If you weren’t based in Saskatoon, where would you live?

Ryan:  Somewhere in the states for sure.  California or the American south – maybe Georgia?  I like it down there.  It’s warm.

If you could go back to any decade, what would it be?

Ryan:  We listen to WFMU a lot – especially podcasts of ‘The Best Show‘ Tom Scharpling. He is my hero.  That’s pretty much all we’ve got playing in the van.

The Satellite on Sunday, December 4 and The Hotel Cafe

Their new album, The Place I Left Behind, is available for purchase on iTunes or online here.