TEN QUESTIONS FOR… The Stray Birds 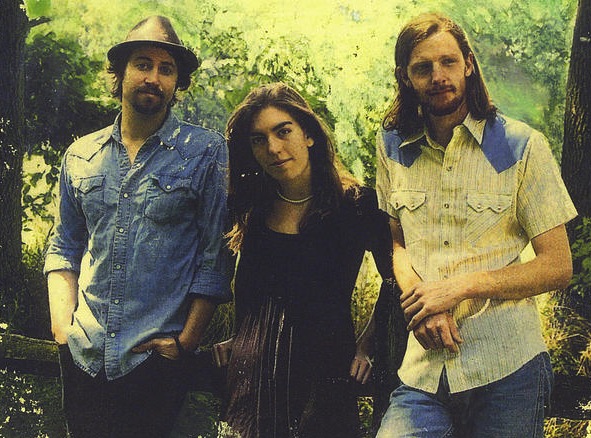 The Stray Birds is an acoustic trio from Lancaster, Pennsylvania with roots in bluegrass and old-time, and a strong emphasis on vocal harmony.  After releasing their first full-length album (available here) and touring extensively throughout 2012, the band has amassed some fans amongst the roots music media and wider audiences alike.  Kim Ruehl, writing for Folk Alley this July, lauded the band for allowing ‘the art of restraint… where the strings sing on their own and the songs are, as a general rule, more sparsely arranged.’

Made up of Pennsylvania natives Oliver Craven, Maya de Vitry, and Charles Muench (all of whom share and trade-off various instrument duties), two-thirds of the band sat down with The Sitch to provide a little more insight into the trio’s lives:

What are the origins of The Stray Birds?

Maya:  I was traveling a lot after high school, and I vividly remember riding in a bus in Spain and listening to Townes Van Zandt singingFor the Sake of the Song, and that was the moment I decided to come home and write songs.  When I came home a couple weeks later I met Oliver, who had been playing fiddle and writing full time, and we just started playing together.

Oliver:  Maya was doing a bit of recording in the Spring of 2010 and I was playing some odd gigs here and there, so we started busking [in Lancaster], then sharing our music, then ended up heading into the studio together, eventually bringing Charles — but we didn’t even have a name yet!  And our first EP came out at the end of 2010.  That was kind of when The Stray Birds were born.

Maya:  I think the real origin of the band comes from loving to travel, and having a job that allows for being on the road, and also loving harmonies and being able to switch between different instruments within a band.  That’s a real spirit of who we are.

Oliver:  Personal for me, also include Townes.  I have a lot of surprising influences actually.  People see me playing the fiddle, but yet I love Jimi Hendrix.  I was really into Old Crow Medicine Show for a while — those guys still great.  And my family — I grew up playing in a family band, and that was a huge influence in my music and my behavior.

Maya:  I grew up in a family that also played a lot of this music.  We always had a circle of friends that would sit around and play on a Friday night.  We even went to festivals all over the country.  It was all about playing music for fun — that was the main social activity.

I think that listening to Townes liberated me to write songs.  He was so honest, that he showed me how to put everything out there.   And I also grew up listening to a lot of Iris DeMint.  And Ioved Nickel Creek when I was in middle school and high school — seeing a group that was so young do such innovative amazing stuff.

How would you describe your sound?

Oliver:  Ha!  You’d think we’d be able to define this by now.  I mean it’s really roots-inspired-original-American-string-band-music.  That’s it.

Maya:  But I think we fit in a couple different places.  When we play traditional bluegrass festivals, some people are going to look the other way because I’m playing clawhammer banjo.

If you weren’t based in Central Pennsylvania, where would you be?

Maya:  [laughs] Oh, I’d probably live in the Medeterranian, maybe South of France?  Really though I’d probably stay on the east coast, just because of the proximity, and there’s still a lot of places here that are unspoiled.

Oliver:  Philadelphia is a cool place too.

Has there been a venue that was particularly special for you?

Oliver:  There have neen a few.  One was called Ripton Community Coffeehouse in Ripton, Vermont.  A lot of the places we go, we don’t have an audience.  We’re a first time band and we rely on our own publicity and the publicity of the venues that we play.  That place sounded great and responded well, and there were 150 people sitting there silent and listening to us for two hours, and they all bought CDs.  That was an awesome environment.

Do you have a favorite music store?

Maya:  Charlie just bought a banjo at the Old Town School of Folk Music in Chicago, and that was overwhelmingly awesome.

Oliver:  I almost walked out of there with a guitar too!!

Maya:  We’ve had John Fullbright playing a LOT.  We actually opened for him in Tulsa — which was his hometown crowd.  That was particularly awesome.

Maya:  Margaritas minus the sour mix.

Oliver:  I would like to live before the internet.  A lot of what we do right now is internet based, which is great — I mean, this very interview is for the internet — but I still like that idea.  Or maybe the 1920s.  Before the crash.  Amidst the social renaissance that was happening.

Maya:  I just remember asking my grandma once, what do you think the best time was?  And she would always talk about the era between the 1920s and 1940s, when she could go out swing dancing any night of the week.  She met her husband when he drove by in a car and offered her a ride.  You would never do that now!  So maybe a time when you could just jump in people’s cars.

Finally, what’s next for The Stray Birds?

You can learn more about The Stray Birds at their website, http://www.thestraybirds.com/