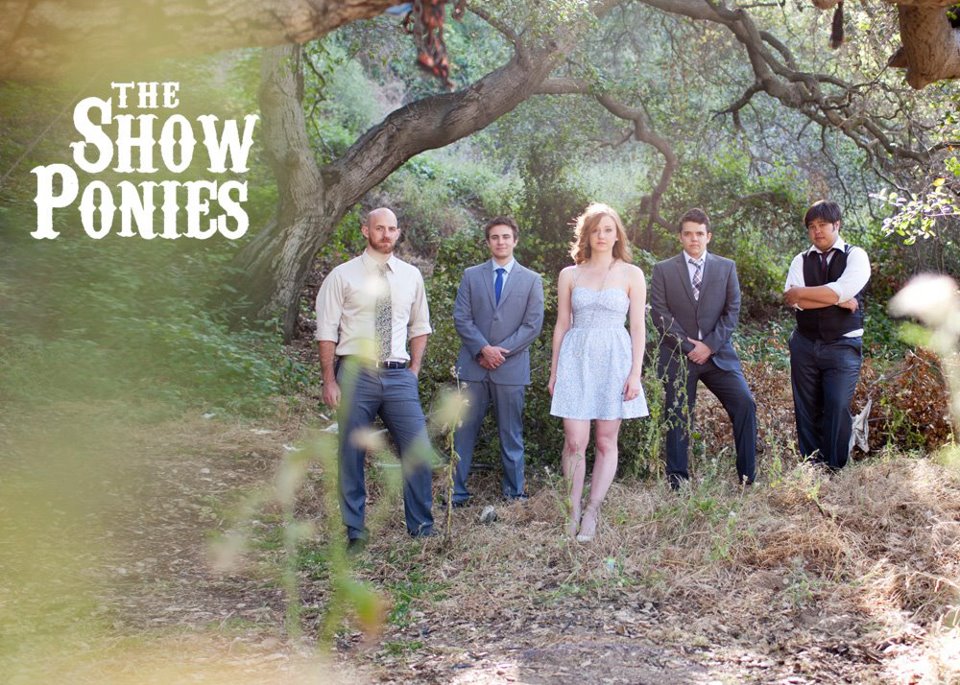 THE SHOW PONIES are an indie-folk outfit blending old school country tunes and oh-so-soulful lyrics. The band came together in 2011 when Clayton Chaney and Andi Schrock — both with roots in the deep South — joined forces to mix their musical backgrounds. Finding themselves in LA, the two lined up a classically trained trio of musicians: guitarist and banjo player Jason Harris, fiddle player Philip Glenn and percussionist Kevin Brown. They’re currently working on their sophomore album and gaining momentum throughout Southern California.

What are the origins of The Show Ponies?

Jason: I’ll leave this one to Clay and Andi.  They were the initial ponies while Phil, Kevin and I all met at school while studying classically.

Clay: The Show Ponies started just as Andi and myself writing music for fun, in the hopes of playing some open mics and putting some songs online. At first, the name was a joke when I asked Andi to bring a miniature pony to rehearsal. The name stuck and seems to capture something that is distinctly Americana, humorous and serious at the same time while creating the image of something that has been tamed, trained or pinned that was originally intended to run wild.

Phil: I was actually a late addition to the group. Summer of 2011 I had just gotten back from the Mark O’Connor Fiddle Camp in Tennessee and Jason asked me if I wanted to record fiddle tracks for a band he was producing. I came in just expecting to play lame pop-country fiddle licks, but as the session went on I thought ‘Man, I would love to be in a band like this.’ I guess the feeling was mutual, and here we are today.

How would you define your sound?

Andi: I would say we are folk music with bluegrass tendencies.

Jason: Someone used the term neo-bluegrass to describe our sound the other day.  I like that, generally. I think we all desire to not be put in a box though. We come from a diverse set of musical backgrounds.

Who are your musical influences?

Kevin: Lots of funk and jazz along with classical percussion. I’m probably not the best person to answer this question for a ‘bluegrass’ situation article.

Phil: I hear a lot of Bob Dylan in Clay’s songwriting, but we all bring a lot of different influences to the table. The fiddle players I try to model my sound after are Stuart Duncan and Bruce Molsky.

If you could play with any one band or performer, who would it be and what song would you want to play?

Andi: Allison Krauss. I would love to sing with her! Probably, ‘Bury Me Beneath the Willow’, I think she would sound beautiful on it, and everyone knows I love singing that one!

Phil: It would have been great to play ‘Drunken Hiccups’ with Tommy Jarrell before he passed. I hope I get to be half as cool as him when I’m an old man.

Kevin: The Mars Volta and any/all the songs from De-loused in the Comatorium

Clay: I would like to play ‘You Ain’t Goin’ Nowhere’ with Bob Dylan

What alcoholic beverage goes best with your music?

Andi: I’m a beer girl, but I’d have to say an Old Fashion.

Phil: Bourbon. Well, at least that’s usually what I drink when I play.

Jason: Yeah, sometimes Phil drinks a little too much Bourbon. I’m not a huge fan of it but I’ve got to go with any type of whiskey

What are your favorite venues to play in LA?

Phil: It was kind of a weird night, but I had a lot of fun at the Viper Room. We were on after a couple of hardcore bands, and I was pretty sure we were going to clear out the room as soon as we got on, but it ended up being a really fun night. One of the bouncers came up to me after and said that he had never heard a fiddle in person and picked up a CD.

Jason: I personally love playing at the Mint. The sound guys are top notch, the stage is the perfect size, management is friendly and it’s an intimate setting. I used to play in punk bands in my teenage years and I always preferred the really small and compact shows. That preference hasn’t left me, but I think I’m probably done with circle pits.

Andi: The Mint is a favorite, but we definitely loved the space and the artwork at The Coffee Gallery!

If you could live in any decade, when would it be and why?

Phil: Probably the 20’s, mainly for the music and fancy mustaches.

Andi: The 50’s because I love the fashion! There are so many dresses inspired by that era that I would love to wear and twirl in on stage!

Kevin:  Right now. It’s cool to see the melding of musical styles happening today, especially here in LA. The impact of electronics and computers on music creation, recording, and distribution has expanded and reshaped what is possible and now expected in music.

Where is your favorite spot in LA to take a break from all the chaos?

Jason: I say Griffith Park on a weekday but my wife would probably say the real answer is on the couch in front of the TV.

Clay: The fire roads in the Verdugos above Glendale.

Phil: There’s a specialty sausage place in the Arts District called Wurstkuche, and they have Chimay on tap. Gourmet sausages and specialty Belgian beer, what else could you ask for?

What are you current obsessions?

Andi: I have been getting into knitting lately. That and wedding planning since I’m get hitched this July! Music wise, I have been listening to the recent Mumford And Sons album on repeat.

Finally, what’s next for The Show Ponies?

Phil: We’ve got a couple shows coming up at Sassafras in Hollywood, and yes, we’re trying to get tunes together to record another album this summer.

Jason: And just working on being ourselves.

GIVEAWAY:  The first five readers to email [email protected]  get a free copy of THE SHOW PONIES debut album ‘Here We Are.’  Check out the band for yourself at Sassafras Hollywood in January and February — you can get all their upcoming dates and more here.