The Beauty in Ugly Stories: A Conversation with Anna Tivel 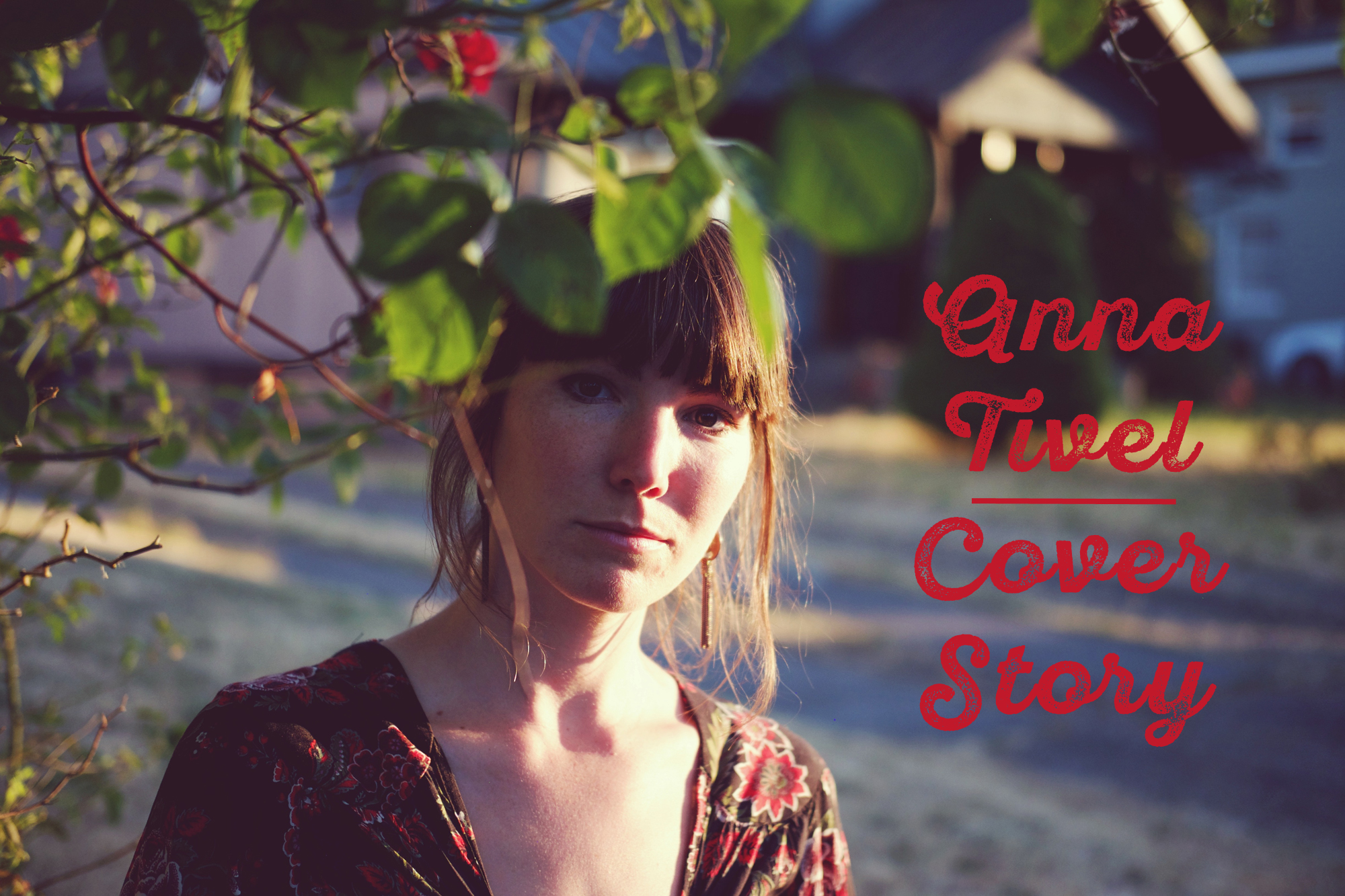 Critics have likened Anna Tivel’s songwriting to poetry, and it’s easy to see why. She cuts her words on glass, creating phrasing that is at once sharp, precise, and poignant. In the opening to “Alleyway,” she sings, “Smoke against the windowpane, just the semis breathing on the interstate, a gray upon the graying of October,” creating a scene in just two sentences packed full of sullen feeling.

But beyond her poetic sensibilities, Tivel is, at heart, a storyteller. Her new album, Small Believer, reveals a penchant for flaws — be they in characters, moments, or memories. The album opens the doors upon marginalized existences and the spaces that hold them; there are broken-down apartments once bursting at the seams with love, and broken-down characters who race the night back to unkept promises.

Tivel’s razor-edged poetic lyricism bolsters each kind of story, allowing such broken baubles to let loose their truth and shine once again. “Alleyway” — a song told from a former lover’s point of view as she walks a path home by the river, reconciling her routine existence with a fleeting moment of happiness long ago — cuts and carves language down to some inimitable truth. “And I know good things never last. I know that now, but I didn’t then,” Tivel sings — her whisper-like inflections, the soft way she couches the admittance — breathing resolution into what could feel like a bitter line. Tivel’s storytelling, though drawn to the quietly forlorn, doesn’t revel in that same tone. Small Believer quietly unpacks ugliness to find its hidden beauty.

People have called you a poet — and there’s truth to that descriptor — but I liken your craft more to short stories than anything else. Why do you think you’re drawn to characters, in particular?

Something I’m falling in love with is trying to tell a story through the eyes of a character. I think it’s the way I’ve found to process. You’re out in the world and out on the road, and you hear people’s stories and you collect all these different lives. People are going through all sorts of things, and you’re going through all sorts of things, and I’ve found it to be a really different way to distill that, if that makes sense.

So many of the characters exhibit flaws. Are you always gravitating toward flawed heroes?

Yeah, I think that always feels more honest and real to me. Looking at the world, it’s beautiful, but it’s not bright and shiny. I guess the super happy things, I’m not as drawn to dig into.

Listening to the album, I couldn’t help but think about the term that’s been bandied about since the 2016 election: “flyover states.” These hidden narratives, these unknown people, and a lot of your characters feel like flyover characters.

Yeah, some of them are drawn from one story I’ve heard, or something inside of myself, and some of them are a big blob of a lot of things. It’s not so planned, like “I’m going to write a song about this.” It’s just sort of something I’ve been kicking around and needs to come out, I guess, and it comes out in that narrative.

That’s the beauty of that kind of writing — you can pull together so many different pieces. You’ve described yourself as an introvert, and speaking from that position as well, it feels as though there’s the tendency to observe more than participate. But being a songwriter, you have to participate to some degree when you perform on stage. How do you find yourself striking that balance, if that’s even something that you even set out to do?

I love that you said that because that rings true to me, too. Observing is what I’m drawn to more than standing on stage. If performing wasn’t a part of this cycle or this job, I would totally hermit out. Because you’re really vulnerable — people are really vulnerable with you, and that’s a good connection that I don’t think I would foster very often, if left to my own devices. I’m really thankful for that.

I guess I’ve kind of fallen more and more in love with the performing part of it. I think, for a long time, when I first started out, I needed to approach it the way I saw other people approaching it, who were super extroverted and drew their energy from being in front of people and going out in front before the show and then playing the show and then partying after the show. I’d just shrivel up into a tiny raisin and die from doing that. I think this will be a life-long learning thing, but figuring out the way I love it the most is just to treat it more like a conversation with people. If people are willing to be in it with you and engage with the stories, then afterward, they reciprocate and tell you stories. You have this special thing that you wouldn’t have had, if you’d just gone to a bar and didn’t see that in people.

Do you ever have to push yourself to get out and participate? I feel like the introvert’s creed is to cultivate that internal space rather than the external.

Yeah, I don’t drink much anymore. I used to do that to put a pad on things. That’s always a struggle; it’s always rewarding, though. It’s one of those things … after a long run of shows, you’re filled up and you need to go be by yourself to understand. [Being extroverted] is definitely a struggle, maybe not my most natural state, but I think something that I feel has just exploded my world in a way that never would have happened without music.

Music seems to be the conduit for these two variations of being in the world. Introverts recharge and draw that energy from those quiet moments of solitude. Not that they can’t enjoy other people’s company.

Totally, or like a one-on-one with people or a calmer interaction. That’s the nice thing about songwriting or doing music out in the world, you go out and you do this thing, and you take in a lot of other people’s messages and then, the other half of it is, you go home and there’s a lot of work at home, in your own head, where you’re delving into your weird brain. There are seasons to it, totally.

Which is all the more reason to get back on stage, because once you’ve spent too much time inside your own head …

Yeah, you’ve gotta get out of there. [Laughs]

So many of these songs are set at night, and I figured that might be in part because you’re nocturnal by nature, being a performer, but there seemed to be this reverence for that time of day. Can you speak a bit about your relationship to the night?

I almost called this record Nocturne, because listening through to the songs I was like, “Man, I got a night thing going on with this album.” [Laughs] It’s the same reason that little bits of ugliness and hope that I’m drawn to … the night kind of embodies that a little more to me. You do your whole day and then reality hits — you come home and you’re by yourself, and all the things you were hoping your day would’ve held … it feels like that a bit to me. Just that’s where the truth lies, when it gets dark and all that’s there is yourself and what you’re trying for.

With “Saturday Night,” I couldn’t help thinking about the times I’ve lived in big cities, and one of my favorite activities involved glancing at people’s windows as I walked by. Not in a voyeuristic way, but you get a brief tableau before you pass.

Well, that’s what “Saturday Night” reminded me of — seeing what someone else is doing, when you’re in your own head trying to work through something.

That’s exactly the song. I was working at a restaurant job, and I’d get home late at night, and I was living in this rickety old house divided into apartments and there was a guy in the basement. No matter what time it was, he’d be up. I’d come home, and he’d be staring at the TV or the wall or something, and I’d stand across the street a little and, not creepily at all, watch him. That song started in one of those moments. Yeah, that’s one of my favorite things, too, just walking around at night and everybody’s in their little box.

I’ve said it to people, and they look at me crazy.

Sometimes I tell that story on stage and I can feel people thinking, and I’m like, “Whoops, I shouldn’t have said that out loud.”

I guess we should be happy we’re not men because it looks even worse if you see a random man standing outside staring.

I think about that all the time! [Laughs] I love to sit and watch kids at the playground, but you cannot be an adult man who goes to the playground.

Nope. Alright, last question: Nature arises throughout your latest album, especially through stars and rivers. What is the relationship you’re keen to draw out?

I grew up in the valley of Washington, the farmland area by the Skagit River. My dad was a fisherman for a long time, so I’ve always been around the ocean or the river. We lived right around this river path, and I would walk my dog on this path and, when I’m walking, songs are forming or trying to work out lyric things. I guess I don’t even realize that thing as much as I realize the stuff about night coming up again and again. [Nature] is a solid, calming force, and it has nothing to do with people or what people are making — the ugly bits of the world that are manmade. It’s a steady opposite to that. “Riverside Hotel” is literally the story of a homeless veteran I would walk past and talk to sometimes on this river walk when they were building a Marriott Hotel across the street. There’s a song on there called “Alleyway,” and it’s the story of a woman who’s working down the same river walk at a Super 8 motel, and she’d take that path along that river.