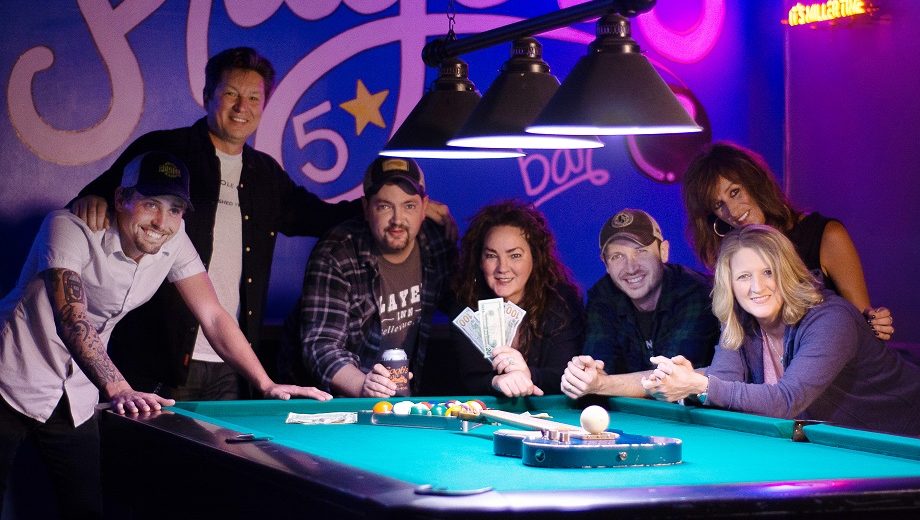 Most likely to succeed? That’s of no interest to the Likely Culprits, an easygoing group of bluegrass cut-ups who just released one of the most entertaining albums out of Nashville this year.

With four of the band’s members bantering inside a forgotten conference room at IBMA, they readily confess that their name derives from an ongoing conversation within the band: Who’s the most likely to end up behind bars? It’s currently a seven-way tie between Brandon Bostic, Ronnie and Garnet Bowman, Melonie Cannon, Ashby Frank, Deanie Richardson, and Austin Ward. The informal happy hour vibe of this conversation lends itself to proceed on a first-name basis.

“We’re all pretty rowdy,” Deanie says. “We’re all a bunch of hillbilly rebels and we were like, ‘Well, one of us probably get arrested eventually.’ And it was just, which one of us was going to go to jail, and who’s the likely culprit?”

Turns out, that unpredictability is the album’s greatest strength. When pulling together its dozen tracks, they wanted to ensure that all five of the band’s vocalists had a chance to sing, and that nobody’s favorite song was left out. The result is something like listening to a stereo with a seven-disc changer, but with a throughline of excellent musicianship and a high caliber of songwriting.

For example, Melonie unearthed album cuts from Bonnie Raitt, Lucinda Williams, Brandy Clark, and Matraca Berg, while Ashby reconfigured pop star Gavin DeGraw’s melodious “Where You Are.” After years of singing it at the band’s Station Inn shows, Garnet finally recorded “Tennessee Blues,” a deep cut from Keith Whitley. That tearjerker is immediately followed on the album by Brandon’s version of Dave Matthews Band’s “Gravedigger.” Listening to the self-titled album as a complete body of work, it somehow fits.

There might be a shorter version of how the Likely Culprits all met, but here’s one way to tell the story: Deanie and Melonie have been friends since childhood, and when Melonie married Deanie’s brother, they’d host guitar pulls with their mutual friends. Garnet would come to those parties, forging a bond among all three women that’s lasted 25 years. In the years ahead, she would marry Ronnie, who cultivated his bluegrass reputation in the ‘90s with the Lonesome River Band and as a solo artist. He also produced Melonie’s solo albums with her father, Buddy Cannon.

Meanwhile, Ashby met Garnet and Melonie when he was playing in Ronnie’s band. Later on, when Deanie and Ashby crossed paths a party, they recognized that they’d found kindred spirits in each other. Then, as happens in Nashville, they had an idea to form a band, admittedly with no real intentions of taking it on the road. Instead, the priority would be simply making good music. So, together they rounded up Melonie and Garnet, while Ashby recruited two of his friends, Brandon and Austin. And just as the band was hitting its stride, Ashby took a temporary job as a musician on a cruise ship.

“We were having so much fun, it was like, man, we don’t want to stop,’” Garnet recalls. That’s when Deanie asked Ronnie to take Ashby’s spot, not sure if he’d even want to.

Ronnie explains, “Not that I don’t enjoy being in the band now, but I enjoyed not being in the band back then, because I could actually go to a place where I wasn’t expected to play, and I could see these guys play. I mean, I loved them. And by the time Ashby left, I knew all the songs.”

“I knew he was having fun coming and hanging out, drinking a few beers without the pressure of getting up there,” Deanie says. “But he said he would do it and then it just felt amazing. It felt like it should. He’s one of my heroes and I love him to pieces. Just to get him on stage with us was a big dream of ours. So I’m honored he agreed to do it. Ashby eventually came back from the boat and we thought, ‘Well, let’s throw everybody in there.’ And we did. We played a few shows and said, ‘Let’s do a record, why not?’ So here we are with the record.”

So, what makes the Lonely Culprits click anyway? To borrow a title from the album, “Everybody’s Got Something They’re Good At.” Deanie is an exceptional fiddler, while Melonie and Garnet possess warm, instantly identifiable voices. Ronnie sings and plays guitar, and also serves as co-producer (with Buddy Cannon). Brandon provides vocal, acoustic guitar, and electric guitar, and Ashby sings and plays mandolin. Austin keeps the Likely Culprits moving along on upright bass.

Though it sounds like a long-lost Harlan Howard composition, “Everybody’s Got Something They’re Good At” happens to be a Ronnie Bowman/Dale Dodson original, with Garnet singing lead. (Lee Ann Womack recorded it first but her version never came out. Alison Krauss plays fiddle on this version.)

Just after that throwback country tune, Ronnie sings another of his compositions, “Won’t Do That No More,” with such poignancy that it’s no surprise at all that he’s won multiple IBMA male vocalist awards. He’s also an accomplished songwriter who has placed major hits with Brooks & Dunn, Kenny Chesney, and Chris Stapleton.

It’s worth mentioning, too, that Deanie earned an IBMA award this year as a member of Sister Sadie. She’s also toured, along with Brandon, in Patty Loveless’ band. Asked what it feels like to have a lead vocal that keeps changing, she immediately replies, “Oh my gosh, I love it because with Sister Sadie it’s bluegrass. With Patty Loveless, it’s country. But with these guys, it’s all of it.”

That bond has only strengthened since the band’s first show at Station Inn in 2012. It remains a special spot for the band, who listened to the album in its entirety for the first time over the club’s sound system. (Yes, they rang the bell.) They’ll also play an album release show there on November 15.

Thinking back to those days, Brandon recalls, “I moved to town and I didn’t know a single person. I took a job playing in a bluegrass band and moved up on a whim. I thought, ‘I’ve got to get out of the house, I’ve got to meet some people.’ So I started hanging out at the Station Inn and I found a group of people that are my family now. We’re all pretty much on the same page and we’re like-minded with music and what we like and what we don’t like. Playing with them, it’s like coming home all the time.”

One of the band’s biggest champions is Jamey Johnson, the country singer-songwriter who made it his mission to get the Likely Culprits’ new album into the world. He’s also invited them to open a series of shows this week in the Southeast, part of his ongoing effort to support female artists in country music.

While Jamey’s fans are devoted to his singular approach to songwriting, it’s just as likely that they’ll appreciate the perspective from these seven musicians, too. Because Melonie is already a familiar presence at his shows as a harmony vocalist – and because Jamey comes to all the band’s shows — there’s a certain comfort zone already in place for the Likely Culprits, one that doesn’t involve prison guards or enforced curfew.

“This is us sitting in a living room with somebody saying, ‘Ronnie, pick a song,” Deanie says. “Ronnie might pick one, and Garnet might pick ‘Tennessee Blues,’ and Brandon might pick ‘Gravedigger.’ It’s what we do, man. It’s great. I love these guys. I’d go all over the world with them.”

“I would too,” says Brandon, says as Ronnie chimes in with a “Yeah.”

“Same here,” Garnet concludes. “We all feel the same way.”