The Unforeseen Singer: A Conversation with Liz Vice 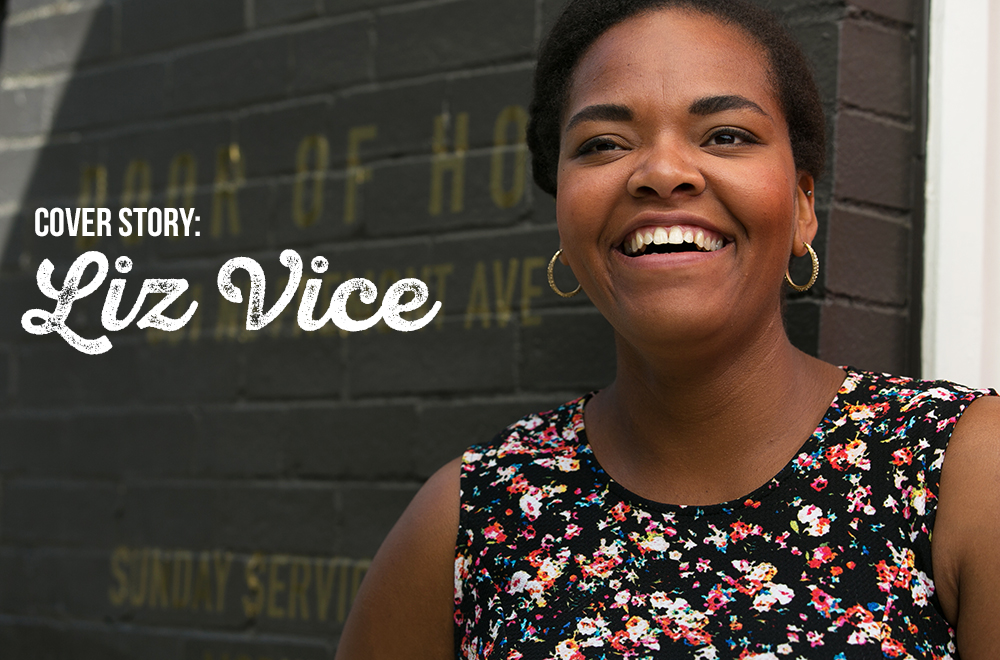 For 32-year old Portlander Liz Vice, a career as a singer is something she’d never considered. As a kid, she wanted to be an actress. As a young adult, health issues sidetracked her acting career and, ultimately, led her to work behind the scenes as a filmmaker and producer. Until a year-and-a-half ago, that is, when a project with Blitzen Trapper’s Eric Early began opening up some musical doors. Vice recently sat down with the BGS at Albina Press coffee house to talk about her recently released album, There’s a Light, and what it’s like to find herself onstage, in the studio, and, to her surprise, mentioned among some of American music’s most notable names.

So, I voted for you.

Oh, for the Cayman Islands thing.

That’s a lineup, man. Did you look at who’s on that trip?

I didn’t know I had been entered into that contest [the Cayama Journey through Song Cruise] until Jacob Abbott from Ramseur Records said, “Hey, you were selected in the top 10." I didn’t even know that he had submitted us; he did it a long time ago. It’s insane. These people have been doing music for their whole lives.

Last night, Leon Bridges did an Instagram post about me because I’d given him my album when I performed at Pickathon. It was mostly because we have mutual friends and I wanted to say "What’s up?" He said he didn’t get to hear my set so I gave him my album.  And then my friend said something on my Facebook page that I was in Relevant magazine, which is a magazine I grew up reading when I was a teenager.

Then, to be in-the-running to play on a boat with these people … like John Prine … I’m like, "Did I just kick over a set of dominoes? I’m so sorry." I don’t even know how to make it stop or where the next trigger point’s going to be. It feels like one thing happens, then something else happens. It kinda leaves me speechless. Not like, "Oh my God, I’m so speechless," then I’ve got a lot to say. It’s really like, I don’t know how to react to it.

John Prine, John Hiatt, Steve Earle, Jason Isbell … you certainly deserve to be there, based on hearing the record.

You were on World Café recently, too, which is pretty awesome. How’s the response been to that?

Honestly, with most of these things, I don’t even find out about until a friend tells me.

Growing up, I wanted to be an actress, but there weren’t a lot of brown people in movies that I wanted to be in. And I don’t want to portray a slave and I don’t want to portray a teen mom in poverty. Even though I grew up in a single parent home and poor and without a dad, I went to college. I got my Bachelor’s degree. I was an honors student. So I didn’t let statistics and media define who I am as a black woman.

And I’ve always known the Academy Awards and late night TV shows … when I was a kid I used to pretend I was being interviewed by Jay Leno. I would write imaginary Oscar acceptance speeches. So, in the film world, those kinds of things were on my mind.

Suddenly, I’m in the music world. And it’s different from me listening to the radio or to Spotify all day long and finding new music but not really investigating the hub of where these musicians come from. I knew about NPR when my music was featured — not because I had any idea about their music coverage — but because I love the TED Radio Hour and Planet Money. I love podcasts, just learning something new about technology and humanities and the nature of people.

So when things like World Café are presented before me, it’s usually something I’ve never considered. It’s the first time I’ve ever had to think about questions like, "Would you be interested in doing an interview for World Café or for the Bluegrass Situation?" I’m like, "Can I have a few days to think about this and figure out what I’m getting into?" A lot of the things being presented to me are really big deals in the music world but, honestly, I’ve not heard of a lot of them. I don’t realize how big a deal it is. It’s like jumping into cold water. 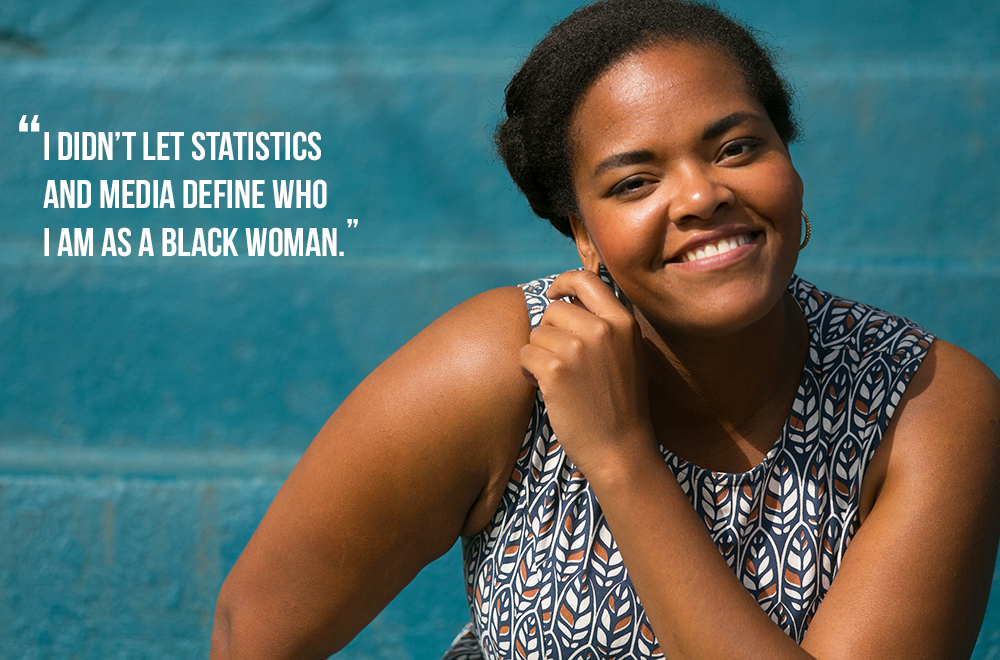 I learned about you from Eric Early [of Blitzen Trapper] …

… because I interviewed him about the live album they did, on which you sang on “Shine On.” And you tore it up. I was like, "Who’s this girl? Liz Vice. What’s her story?"

I was so scared when I did that.

I was part of a project that Eric and I did [in October 2011] with Josh White called Wounded Healer. We opened up for Josh Garrels at the Aladdin Theater [in Portland] and it was the first time I’d been onstage. But, I was in the background, where no one really knew who I was. Then, when Eric asked me to sing at the Doug Fir with him and the band [for the live album], I was so scared.

I remember Brett Way, from the Parson Redheads, standing backstage with me and she could tell I was freaking out. I had taken my shoes off — because when I get nervous I have to be barefoot because I’m afraid I’m gonna fall over. [Laughs] Brett just grabs me by the hand and says, "Let me pray for you." And I just went out there and she just watched and I sang for the first time in front of an audience like that. And that opened the door to sing at a New Year’s Eve show. Adam Shearer [of the Portland band Weinland] was like, "You got this. You can do this. We’re here to play with you."

Eric was in the studio when we recorded my album and, when I would feel bombarded by "the professionals" who would say, "Yeah, we’re going to do it this way or that way," Eric would look at me and say, "No, no, no. What does Liz want to do? How do you feel about this?" I’d say, "Well, I don’t really know the vocabulary of this, but I don’t like how it goes from this key to this key so abruptly. It’s too hard for me; I’ve never sung like that before." Eric is awesome.

He is and, in a way, that’s so unassuming. He’s so talented and I never feel like I can’t try something new with him. Which, for me, having never done music, I’m okay with taking risks. It’s not like I expected to be here, so let’s take a risk. When I work with people who allow me room to sing something and they’re like, "Hmm, that’s not working." I’m like, "You’re right. That sucked." But at least I tried and I know it didn’t work out. Or I tried and I knew it was supposed to happen that way and it did work out.

How does the filmmaker part of your brain influence your music?

That is a great question. Music becomes visual to me. I remember when I wanted to prove to myself I could direct a music video. I approached an artist because the song was very visual to me. I’ve noticed that, if someone asks me to sing on a song with them or someone presents a song to me to sing, if it doesn’t become images in mind, it's hard for me to connect to the story that’s being told. There are definitely some songs on my albums that are way more visual to me than others; it just allows me sing it in a way that’s more intimate. 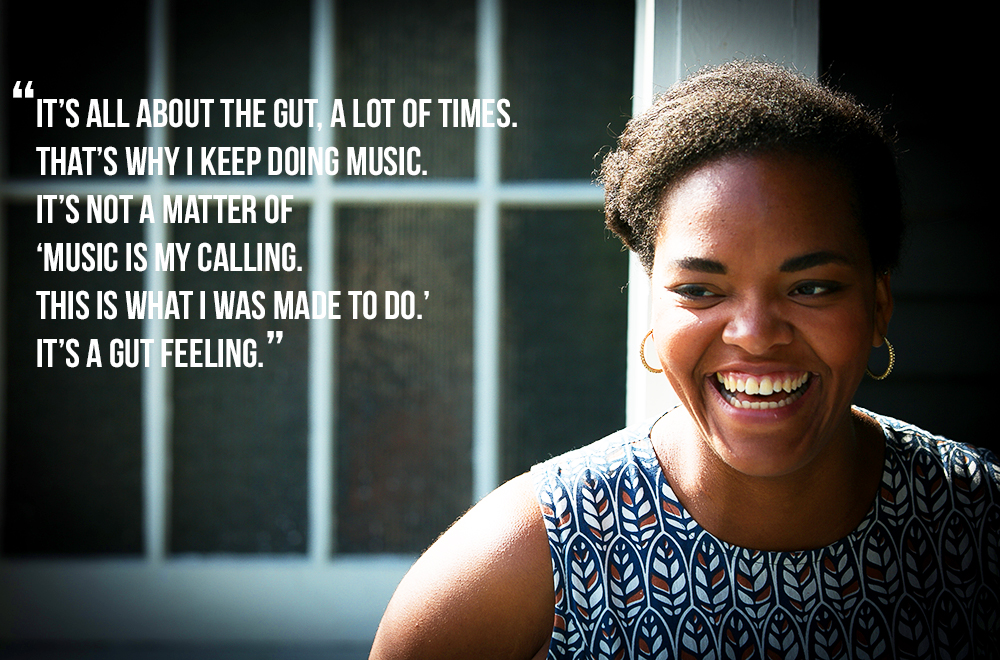 What was your number one goal going into the recording of There’s a Light?

My number one goal was to sing this album, that we could give it away free, then I’d go back to struggling in film. The whole time I was in the studio I was like, "Oh my gosh, I’m an imposter. They have no idea I don’t know what I’m doing. I don’t even know if this sucks. No one is saying anything. Okay, I guess I’ll sing the song like this."

Yeah. I have a friend, an actress, who came up to me and said, "How are you doing with all this music stuff?" I was like, "I … I … I don’t know." She said, "You feel like an imposter, don’t you?" All my actor friends say they feel like imposters. Then one day it clicks and they think, "Yeah, I know what I’m doing."

[Laughs] It’s so insane to me when people compare me to these musicians. Like, "Oh yeah, everyone knows who that is." I don’t really know how to respond but to say, "Thank you," I guess.

Well, Mavis does what you do. She sings the message, in her own way. From my point of view, that’s a pretty high compliment.

Our human language is so limited. How many times can I say I feel so honored? But, I am honored.

All photos by Michael Verity for BGS

Black VoicesSep 14
WATCH: The Suffers, "Could This Be Love"