The Watson Twins Turn to Each Other on ‘Duo’ 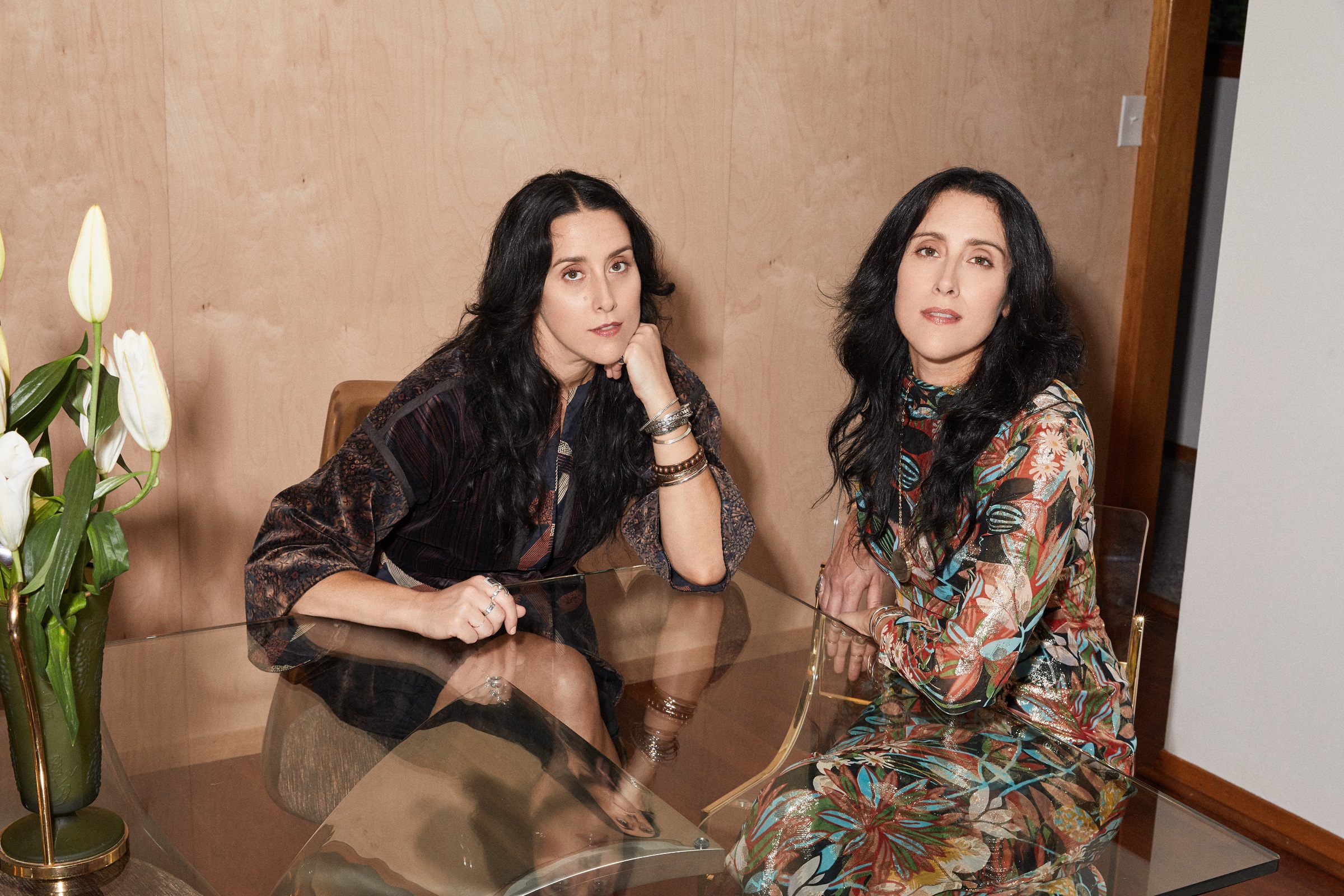 Chandra and Leigh Watson, known collectively as the Watson Twins, are stepping to the front of the stage once again with the release of DUO, their first project since moving to Nashville in 2013. The Kentucky natives earned their indie cred in Los Angeles through their impeccable harmony, touring and recording with Jenny Lewis, and releasing a couple of albums on Vanguard Records in the early 2000s. However, DUO marks a new direction for the sisters, as it’s the first time they’ve focused on co-writing with each other.

With a desire to make a record that radiates with warmth and honesty, DUO leans closer to Americana than any other project in their catalog. A few days before they unveiled the new music at a Nashville concert, they chatted with the Bluegrass Situation about serving the songs, finding kindred spirits, and always, always hustling.

How has moving to Nashville affected the way you write songs, or the way that you shape your songwriting?

Leigh: You know, we were in Los Angeles for a really long time and that’s where our musical career began. I mean, we have been singing and playing music since we were little ones, but in Los Angeles, there’s a lot happening. There’s a lot of noise and a lot of influence and expectations. You’re trying to do something unique and different, and something that stands apart from what everyone else is doing. I think coming to Nashville really gave us the space and the quiet to reflect back on what we do, and to let it just be what it is and not try to be someone else, or not try to reinvent the wheel. …

I think we treated it differently in our past writing experiences, when we wrote separately and then sang together. For this one the co-writing process of doing that together was challenging, but also we’re taking the ego and the pressure away and saying we just want to serve the song. That was a good place to come from in our first adventure of writing together and Nashville gave us the headspace and the quiet to be able to do that.

You have to be pretty honest with each other, though. If one of you comes up with an idea the other one doesn’t like, did you have to learn how to say no?

Leigh: I think that comes with being older and also really not having a lot of egos in it. It’s like, if Chandra would write something and I didn’t like it, I would be like, “That line’s not good enough. We need to push ourselves, we need to think harder on this.” She would come back to me and say, “That’s too cliché, we need to wrap that up in a better metaphor” or whatever.

Chandra: Also, we come from an indie rock background, but we’re from Kentucky, so we’ve always had this amalgamation of a country-leaning, Americana sound, with this indie rock tinge to it as well. Indie rock can be very introspective and melancholy but we wanted to write something that felt warm. When you start to go into that indie rock headspace and become introspective or too metaphoric or too poetic, it was like, “Nope, don’t do that, pull it back and just give an honest statement about how you’re feeling and what this is about.” That kept us on this path of creating a more cohesive record versus just drawing on whatever inspiration. We really thought about the direction of the songs and the warmth that we wanted this record to have.

“Hustle and Shake” seems like it has a little bit of Nashville inspiration, like you’ve got to show up and make things happen.

Chandra: Oh, yeah, well, Leigh and I have been hustling and shaking for a long time. (laughs)

Leigh: Chandra and I have been through a lot of different musical chapters in our lives and that song is really our journey. It’s like our biography, if you will. A lot of people will look at us and be like, “Dang, you guys are hustlers.” We’re like, “Yeah, we just don’t stop.” Part of that is because we love what we do and we love music, and it inspires us and it drives us, you know? Whether we’re being the headliner or whether we’re just outside of the spotlight, or whether we’re on a midnight drive trying to get to the next city, it’s about that hustle and the thing that gives you that inspiration to keep doing it night after night, and year after year, and tour after tour.

You’ve been doing this for a while, like you said. What kind of business advice would you give an aspiring musician?

Chandra: What I can say is be as true as you can to yourself, and trust your instincts, and surround yourself with people who truly believe in you, and have a deeper investment in you as a person and not just your talent. Be sure that you see eye-to-eye on a lot of things, whether that’s your favorite sports team or your morals, or whatever that is. Find those like-minded people, because at the end of the day, you’re all on the same page.

Chandra: You know, it was very different out there. I mean, in the South, the people are just nicer and a little bit more genuine at the get-go. I think in L.A., you have to dig a little harder to find that genuine nature of people, but there are good people out there. I think that there’s just a lot of noise. It’s a big city and there’s a lot of different music scenes going on.

Leigh: It’s just hard to live there. You’re constantly pushing against other people’s momentum. That sounds like a weird way to put it but that’s the only way I know how to describe it. Everyone is on a singular path and it’s really hard to feel like you’ve got support behind you, and that push behind you, because everyone’s going a million different directions. Everyone is late and in a rush and strapped for money. I think with that collective energy, you can be susceptible to that, you know?

Chandra: Needless to say, if you couldn’t get it from Leigh’s statement right there, we weren’t living in the Hollywood Hills, okay? Let’s put it that way. (laughs)

Yeah, that probably is the perception though. You’re out there on tour, living in Hollywood, living the dream, but it’s a lot harder than it might seem.

Chandra: Yeah, it sounds super glamorous. The one thing that I will say is that I feel like if somebody has a desire to live in Los Angeles, they should do it. I think it makes you stronger and it really puts your priorities in check. We both worked really hard in L.A., working odd jobs and touring and meeting people and being out on the road. I wouldn’t trade any of that for the world. I’m glad that I had that experience and it really has helped shape me as the person that I am today.

Leigh: You were asking about advice to musicians. I think my bigger thing would be, even if you don’t have a budget or an advance to make music, just continue making music because sometimes we can get torn down. We self-released this record, with the help of a distribution company called The Orchard, and Think Indie are putting out our vinyl. That’s what we mean about surrounding yourself with people who believe in you. We’ve been out of the game as a solo act for a while; we haven’t released a record in five years. We told ourselves we’re only going to work with people who are as excited about this record as we are. It took us nine months to make the record because we were going song by song, but also we didn’t have an advance to book out a studio and be able to hunker down for two weeks and make it happen.

Chandra: It was certainly a really grassroots records in the sense that my husband, Russ Pollard, recorded it and produced it and our friends played on it. We had a lot of people help us along the way that were just doing it to help us, and that’s it, you know? There’s a lot of love and trust and people who believe in us that are a huge part of this.

I know you are heading out on tour when this record comes out. What do you hope people take away from seeing you perform?

Chandra: Wow…so many emotions. We have a lot of fun singing these songs and I hope people leave with that spirit in their heart. This record was meant to be a very warm record, and in our performances we are trying to anoint that and give people that. It’s important to us to share love and laughter and enjoyment with people in times of stress and unrest in our country. We are trying to go out there and let people enjoy our music and enjoy their night with us.