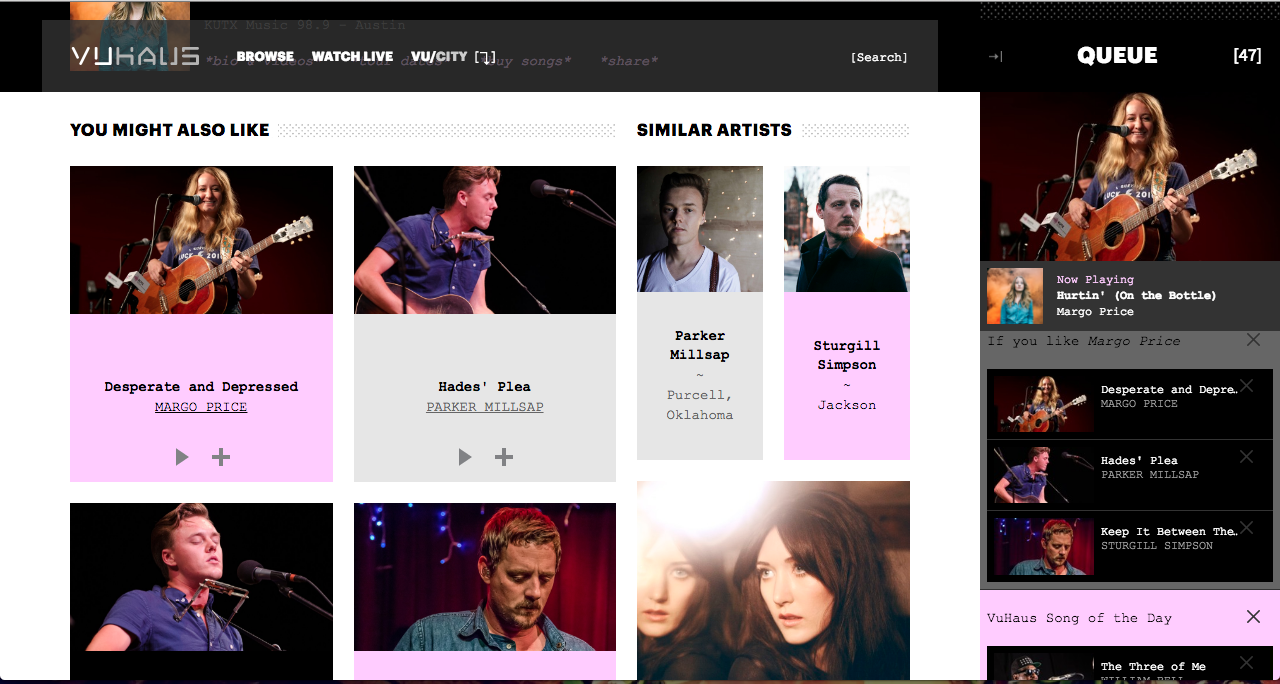 Public radio has long been one of the greatest advocates for emerging artists. From in-studio performances to the format's willingness to gamble on playing under-the-radar artists, a local public radio station is one of the best resources for discovering new music.

In an effort to harness the power of the country's public radio stations, the Corporation for Public Broadcasting developed VuHaus, a YouTube-esque digital music video service that aggregates and curates the best in public radio video content — all on one convenient, free site.

"The public radio music stations around the country, for decades, have been at the vanguard of discovering new bands," Erik Langner, president of VuHaus, says. "They spin their records when no one else will and invite them in for in-studio sessions that are both audio and video. Some of the biggest bands out there — Death Cab for Cutie, Spoon, Beck, Vampire Weekend, Lorde, Adele — all of them got their start on public radio. The tradition at these stations of actively being in the music discovery space has been a long one. As the stations that made up VuHaus were becoming so prolific at creating video, we decided to collectively build a new nonprofit — which is VuHaus — so that we can let an even larger audience know about these great bands."

Langner and his fellow colleagues at CPB, a government-funded nonprofit that supports the needs of public broadcasting, came up with the idea for VuHaus a few years ago, with the site itself launching just over a year ago. Since then, VuHaus has grown from a network of five public radio stations to what the team hopes will reach 20 by the end of 2016. Content comes directly from each participating station and falls under an existing license agreement between CPB and performing rights organizations like ASCAP and BMI. It's then organized by the VuHaus team onto a user-friendly site that's built to encourage browsing and discovery.

It's no surprise, then, that curation is a huge part of VuHaus's focus. Program Director Mark Abuzzahab sifts through hours of video content to determine which artists will get homepage features, as well as fill recurring slots for Artist of the Week and Song of the Day. While VuHaus actively curates music for its own site, the network still leaves the task of booking artists to the stations. Stations also get to use their local expertise to put together VuHaus's city channels.

"We curate the main page, but all of our station affiliates curate their own city channels on the site," Langner says. "Those are really built to allow our audience to get a deeper dive into a particular music scene. It’s a fairly straightforward process when we add a new station."

In a short time, VuHaus's success has led to a number of exciting milestones. Their embeddable Song of the Day player, which automatically populates with new content each day, is now on NPR's website. They've also been part of exclusive premieres with higher-profile artists like Jason Isbell and case/lang/veirs. Recently, they expanded their live webcast coverage to include a number of music festivals and live events, like an upcoming stream of Local Natives performing on NPR's World Café in Philadelphia. Langner attributes VuHaus's success to the strong friendships between artists and public radio stations — a friendship buoyed by the same commitment to art and musicianship that is at the heart of VuHaus's mission.

"We firmly believe that there’s a critical role for curation," he says. "That with so much content being available everywhere, to have these stations that are so focused on finding really great and talented emerging artists, we think the role we play, collectively, is to help identify and then develop those artists and introduce them to an audience that otherwise may not find out about them. When the stations created VuHaus, that was really the inspiration."