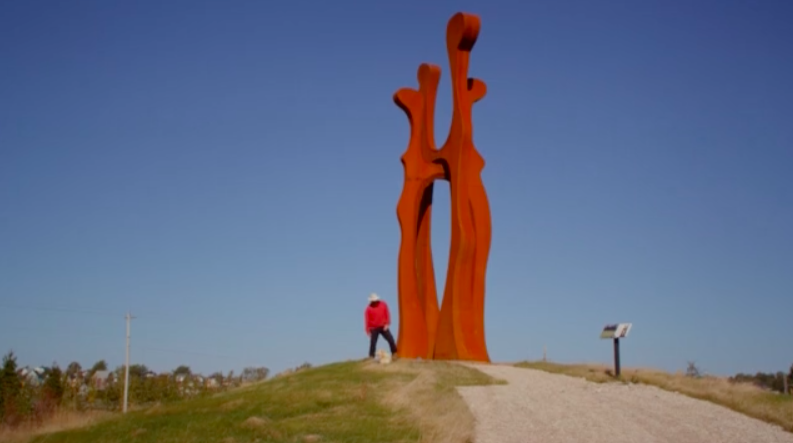 The following is the third in a four-part video series hosted in partnership with and created by Breakwater Studios. Each piece is part of a larger series, Life’s Work: Six Conversations with Makers, that chronicles the lives and artistic pursuits of makers living on Canada’s Eastern seaboard. Look for a new video each Tuesday.

I basically started as a kid, in elementary school. I was always kind of putzing around — drawing and stuff — and I guess you could say I took it seriously when I went to art school. Early 1970s, that’s when I got serious about it, but I was always interested in it and always thought I might do it. Interestingly enough, it was “The Walking Man” by Giacometti. I was looking at, I don’t know, in the basement or something, looking through some magazines and there was a picture of this “Walking Man” and it was like a punch in the stomach, sort of. It really worked for me and that got my interest. I went and started fooling around with wire — got some wire and twisted it all up. Of course, I had no resources or anything. I bought what was that sort of metal colored glue. I don’t know how old I was, maybe 12 or 13, something like that. I actually found it, that wire, the other day. It’s actually not that bad — I don’t know if I got better or worse!

I was a kid prior to beginning my artistic work. [Laughs] But I worked as a deckhand on a lobster boat for 13 years to make money when I moved to Cape Breton because, you know, art is notoriously non-profitable unless you’re one of the lucky chosen few. So, I did many other things, but that’s the one I did the longest. It was 12 weeks of work, basically, in the spring. So it wasn’t too bad and it wasn’t really hard work but I was in good shape and you saw the sun rise out of the ocean everyday and that was cool. I didn’t mind it. I worked construction going through art school, and I did some layout for a newspaper once, and that was kind of okay — it was an inside thing. Part-time work is perfect, if you’re trying to do artwork so you have a bit of an income. Basically, I did whatever people did in the area I was at. I was big and in pretty good shape, so I just took on physical labor.

Well, I’m still mastering it; I’m still working on it. The skills basically were … just getting better at it and figuring out maybe more intelligent ways of approaching some things and that sort of thing. Figuring out what tools work was a big deal. See, for me, I kind of knew what I wanted to do so I invented ways of doing it — for me, I mean. In the industry, I’m sure there are way easier ways of doing it, but they also have huge budgets. I did build a power hammer to do my metal forging, and that was probably the most useful moneymaking tool on the craft side of town and it helped in the art, too. I had never really seen one. That would be the tool that definitely saved [me]. It’s like a carpenter getting a circular saw. It took a couple of weeks to build. I’m still making adjustments and tweaking it. I have ideas that outreach my technical ability, at the moment, and that can be annoying in one way. I don’t have the process to bend and shape giant sheets so I cut them into little strips and weld them all together. It’s very time consuming, but it allows me to make complex shapes. It’s a lot more work, but I can do it, which is the point.

I think, hopefully, it makes the place more visually interesting. People’s yards, public parks … hopefully makes it a more interesting place to be. There are people interested. I did do a big piece and the community really got into that one, and I finished it outside in the summer. People came to watch it leave, get put in the truck and go away. They’re always curious. Frankly, I think, in the beginning, they thought I was kinda nuts. But they do get that I’m surviving and, here, that’s a big deal. I have stuff outside and people always tell me they like this one or that one.

What have you learned about yourself as a human being would be an equally good question. You get to be older, be careful what you get yourself into. If you try to figure it out, if you wanna do it … you probably can do it. It’s also one of the only things that keeps my interest, because it’s always a bit different. I’ve had tough spots and everything but the problem solving generally keeps it interesting. What you learn is, you’re constantly learning. I also learned not to worry so much about it. Worrying doesn’t accomplish much. That’s a life thing for me. I’ve spent a lot of time worrying about shit that’s not necessary to worry about. In the end, it’s not really that important. You know what’s important. Make the time for it. You have to realize it’s worth doing, so … you do it. It’s wonderful if you can spend more time doing the things that you’re passionate about than less, I guess is what I’m trying to say, but I do understand it doesn’t always work.