Why SOPA Matters to BGLA 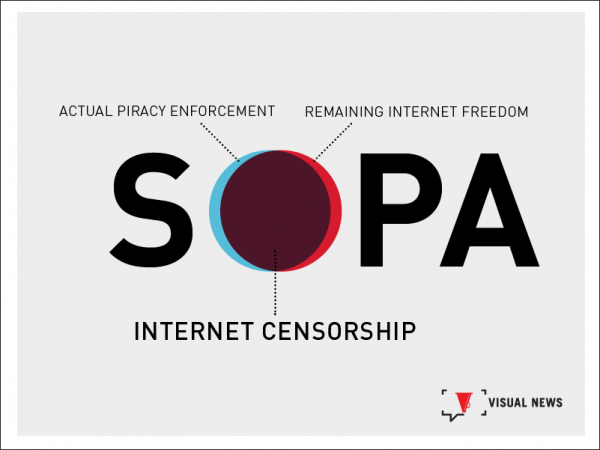 Okay folks.  I’m not one to get political, especially on a site like this.  But this is a matter that hits particularly close to home.  One year ago, before this blog even existed, I would have probably heard about something like SOPA through some NPR story and not cared much beyond that.  But since joining the legions of bloggers out there, its pretty clear that this is bill is a very big deal, and potentially very very dangerous, especially for the likes of BluegrassLA.  If SOPA passes, sites like ours could be shut down just for posting YouTube or SoundCloud links to the very music we promote.  It threatens very basic freedoms of expression and information, and even if you decide not to take a stand, you should at least be aware of what’s going on.

Our new contributor Nick Bobetsky provides some insight on why SOPA matters, and why you — as readers, consumers, and music fans — should be concerned…

Lately, there’s been a ton of coverage about Congress’ SOPA Bill, which in a nutshell is trying to curb copyright infringement online by regulating and having the ability to shut down any sites that contain copy-written material. The film and music industry love it because they feel it will curb illegal file sharing. This is both ignorant and scary. Let’s cover scary first…

If SOPA were to pass it would give the U.S. Governmental agencies the ability to govern search engines and websites, block search results in Google and beyond, and shut down entire websites that have any content deemed illegal. In other words, if CNN’s music page offers a free MP3 that a music publicist sent them for free download, and the government’s system identifies this as illegal, the entire CNN website could go black very quickly, before they even have time to respond. Sound familiar?  It’s not unlike the situation in China, where the state regulates what Google search results come up, prevents social networking sites and more — all to manipulate what their people have access to. SOPA is incredibly broad and would give the U.S. Government the ability to step in and shut down whatever they want, with no checks and balances. It’s a slippery slope, even if they are arguing they will only target blatant violators. While no one is arguing that illegal file sharing should happen, it’s ignorant to think it can be stopped with one fell swoop.

It’s ignorant because illegal file sharing can never be stopped entirely, and because never before has such a powerful marketing tool existed. People say billions of dollars are being lost to illegal downloading – but there’s nothing anyone can do about it and those numbers aren’t necessarily accurate. People are consuming more content than ever – listening to more music, watching more films – and while a lot of that is illegal, consumption is up.  For any artist, that should be exciting.  For any dinosaur, industry grey-hair still trying to wrap their head around the death of the laserdisc, it’s likely incomprehensible.  SOPA is coming from the same mentality of those who gutted their own music industry in the late 90s. They demonized illegal downloading instead of embracing it. It was a new, exciting and progressive experience for the general consumer.  The media picked up on all the personal lawsuits by the RIAA and all the whining from the music industry. It empowered people! All of a sudden, everyone was doing it, not just an elite, technologically advanced group of young people downloading music.  People felt attacked, slighted and angry by the industry and thus lost any remorse of stealing music. The same resentment will happen with SOPA – especially if sites are closed down and affect people’s online experience. Consumers will always download illegally — there’s nothing that will stop it — and SOPA will not only hurt our civil liberties, but our online experience.

We are living in an age where there are no limits to spreading information. We want our content immediately, and we want to be able to get it anywhere.  Anything that curbs the exchange of information will never really work —  people will always find away around it (um, anyone remember Prohibition?? I think we all know how that turned out…).  The answer is to create entertainment that people value enough that they want to spend money on it, utilize every incredible aspect of the internet to promote it and build its visibility and accept that the times they are a-changin’.