Billy Strings Draws a Line in the Sand with Sobriety, Not Bluegrass (Part 1 of 2) 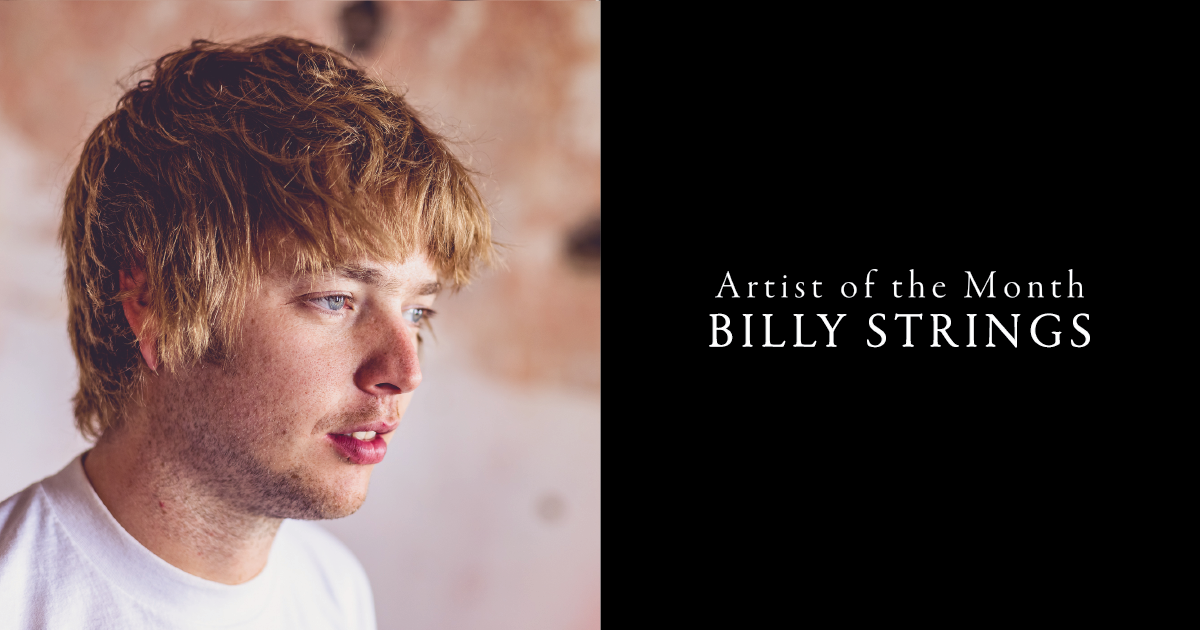 From carving out a name for himself on the road as a teenager to winning a Grammy for Best Bluegrass Album (2019’s standout Home), the prodigious 29-year-old guitar player Billy Strings has cultivated a devoted following and collected an impressive list of accomplishments along the way. His latest Rounder Records release, Renewal, capitalizes on the confidence and artistic growth those experiences have delivered, with experimental new instrumentation, contemplative lyricism, and trademark picking. Produced by Jonathan Wilson (Roger Waters, Father John Misty), the sixteen-track opus offers a glimpse at an artist who is continuously rediscovering himself.

“I’m going through a part in my life where I’m looking through the windshield instead of in the rearview,” he says. “I think of a new day, the morning light, a spider molting, or a snake shedding its skin: It’s a renewal.” In the first of our two part BGS Artist of the Month interview, we caught up with Billy Strings about those new beginnings — on the stage, in the studio, and in his day-to-day life.

BGS: Renewal is mostly acoustic, but it pulls from a lot of different sources of inspiration — and not all of those are necessarily bluegrass. Is there any particular moment on the record where you noticed the influence of a genre that may be unexpected to some listeners?

Billy Strings: “Hide and Seek” is a song that maybe draws more from my influence of playing in metal bands — trying to write a song that’s more like a metal song, but with acoustic instruments… using odd time signatures, diminished chords, and avoiding the major scale. I grew up listening to a lot of death metal, and a lot of that music is just not verse-chorus-bridge, verse-chorus-outro. The songs are like 10 different parts. They’re hyper-composed, and that stuff’s sort of neat.

Was there anything that you did in the studio that took you out of your comfort zone?

I mean, I wouldn’t say it was uncomfortable, but it was different playing synthesizers and different instruments hands-on. I think I gained a little confidence when I won that Grammy — the next time I went into the studio, I was the one calling the shots: “Hey, do you have a triangle? Let’s all come together and do a singalong.” I was the one coming up with the creative ideas and feeling confident in myself to do that. On “Heartbeat of America,” I’m playing some old synthesizer, playing with the pitch wheel and stuff. That shit’s fun.

“Hellbender” stands out as a reasonably upbeat, fun song when you’re listening to it, but the lyrics are… kind of dark. What was going on in your head when you were writing that?

That song’s about a real bad headache and a real bad hangover — being lost in the demons of alcohol, not knowing where to stop, saying, “Fuck it, I’m going to drink until the night’s over.” I haven’t drank in over five years: I haven’t had a sip of alcohol because I had a real bad headache one day. So it’s not really about me, but I wouldn’t really call it a fictional song either. I have been there and done that: woken up like that. It’s about a guy who can’t freakin’ stop.

“Know It All” on the new album talks about learning from your mistakes. Has there been any kind of a difficult learning experience that you feel shaped you as an artist?

Well, maybe that headache I was talking about.

One day we had this awesome gig. A lot of people showed up, and we sold a bunch of merch, and I thought we were fucking rock stars. I had been up all night and drinking beer and liquor and a bunch of shit. We got to the bar after and I was all, “Old Fashioneds! Get one for everybody, on me!” I was raring and tearing. But the next day, we barely made it to our gig, because I was puking every 10 minutes. We made it there in time to set up our stuff and play — we had to set up our gear in front of the audience. This was at a time where my career was really starting to take off, and I saw that as an opportunity to draw a line in the sand.

I think it’s about being conscious of my surroundings, being aware of the vibe that people are giving, and also being aware of the vibe that I’m putting off. I don’t want to be a drunk asshole when some fan comes up to me and says, “Hey man I really enjoyed the show.” I want to be there. I want to be able to say, “Thank you, man. Thank you for coming. I fucking appreciate it.” I just came off four gigs back-to-back. We played Spokane, Washington; Portland, Oregon; Seattle; and then somewhere in Montana. And right now I’m on my way to Salt Lake City. I can’t do that if I’m drinking. It’s all I can do to take care of myself. There’s no time for that shit.

You won Breakthrough Artist of the Pandemic from Pollstar —probably the first time anybody was awarded something like that. What motivated you to try new things when you lost your outlet on stage? Was there anything that struck you as a special moment even remotely connecting with your fans?

I’ve been doing this since I was 19 and I went on my first tour across the country. It’s all I’ve really known, just keeping this going. I’ve been “striking while the iron’s hot” for 10 years. [Laughs] So when all of a sudden I don’t have anything to do, it’s like, “Well shit. We need to keep doing something to engage the fans. We can’t just stop.” We started doing little streams at my house, and then that moved to doing a streaming tour around venues and stuff, and then eventually the whole Capitol Theater run, which was six nights, including this whole experiment where we tried to interact with our fans through telekinesis. That was really special. Even though there wasn’t anybody there, it felt like we were really connected with the audience.

You are out there day in and day out, and I’ve also seen you talk candidly about having anxiety and nerves before going on stage. Is there anything in particular that you do to manage that?

I mean, it’s been a journey. I hit the road when I was 19, playing 200 gigs a year, and for a while there, I was invincible, untouchable. I thought I could drive the van, sell the merch, book the hotels, settle up at the end of the night, write the songs, perform the shows, do everything. It was all on my shoulders. But I hit a wall where all of a sudden, instead of being confident, strong, and untouchable, I was fragile and scared of the world. Anxiety really fucked me up. I started having these crippling panic attacks where my whole body would go into convulsions.

I’m not trying to be a tough guy. I’m trying to be an honest guy. It’s uncomfortable for me to pretend like I’m feeling any way that I’m not, so if I’m angry, sad, anxious, mad? You’re going to know it because I don’t want to hide that shit. I’ve been going to therapy ever since 2019 and it’s helped me a bunch. I had a lot of trauma from my childhood that I had to sort out so I could keep moving forward and stop looking back. That’s what Renewal is all about.

Editor’s Note: Read part two of our Artist of the Month interview here.