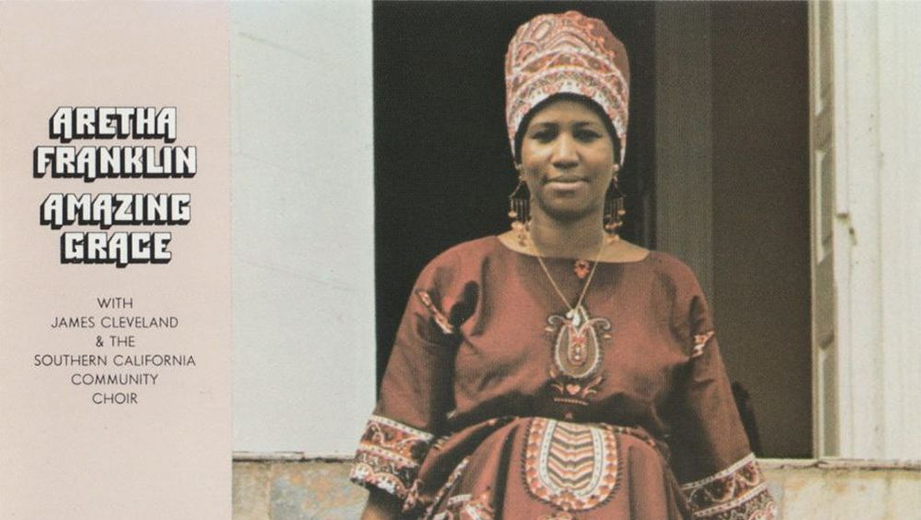 Listen to Aretha Franklin sing “Amazing Grace.” The hymn was nearly 200 years old when she tore into it on her 1972 double-live gospel album with the same title. Her version is nearly eleven minutes, and she spends most of that time wringing those lines of every emotion that has ever been felt in those intervening centuries. Aretha delivers those lines like she’s preaching, and the congregation answers in kind: applauding when she hits that high note on “a wretch like MEEEE” and voicing their excited approval when she locates untranscribable vowels in those simple words “amazing grace.” It is a vibrant collaboration between performer and audience, each pushing the other to new heights of spiritual ecstasy. The Southern California Community Choir comes in like a band of angels, but Aretha isn’t even done yet. Instead, she shakes them off and tests the limits of her upper register.

That is just one of many goose bump-inducing moments on Amazing Grace, which remains her best-selling album as well as the best-selling black gospel album of all time. While it has been overshadowed by the secular albums she recorded for Atlantic Records in the late 1960s and by her unprecedented comeback albums in the 1980s, it remains a touchstone in her catalog, an album that explains her complicated relationship to the gospel world as well as to the pop charts. Beyond that, it’s just an incredible set of music, with all the intensity, all the purposefulness, and all the spontaneity of her own or anybody else’s live albums. Amazing Grace surpasses even her 1971 Live at the Fillmore West, which is saying a lot because that album is a stone classic.

It is, however, an unusual album in her catalog: Title track aside, her voice is often subsumed into a larger choir. She was never one to be upstaged (the only instance I have found is when the violence outside the 1968 Democratic National Convention overshadowed her performance of the national anthem inside), but she slips in and out of the choir, harmonizing with them one moment and soloing the next. The point of the album—the point of gospel, in general—is to share the spotlight with a host of friends and family. Aretha understood that gospel was not a solitary pursuit; the music is not private or internalized.

Rather, it is public, communal: the sound of many voices united in a joyful noise unto the Lord. Even when she is pushing heavenward on “Amazing Grace,” she is no longer the diva she was in the secular world; perhaps this project offered her some escape from the royal demands of pop stardom, the tabloids printing rumors, the endless tours, the complicated business machinations, the physical drain of being the best-known pop singer on the planet. In church, surrounded by people she loved and trusted and admired, with only God as her audience, perhaps she felt at ease.

Nearly fifty years later, the origins of the project are still debated. Jerry Wexler, president of Atlantic Records, claims he encouraged her to record a gospel album, believing she needed to issue a major statement after so many singles-oriented albums. Aretha, however, claims the idea was hers all along, as was the plan to record it live in church. Others claim her father, the Rev. C.L. Franklin, pressured her to reconnect with the church, although he had instilled in her at a young age the belief that spiritual gospel and secular pop both sprung from the same well of black history. “If you want to know the truth,” proclaims a very proud C.L. during his short sermon, “she has never left the church!”

Aretha surrounded herself with some of her gospel heroes, including James Cleveland (the King of Gospel to her Queen of Soul) conducting the choir. Also taking part were her brothers and sisters, her grandmother, and her idol and mentor Clara Ward of the Famous Ward Singers. According to David Ritz’s 2015 biography Respect: The Life of Aretha Franklin, Wexler “was determined to sneak the devil’s rhythm section into church,” which meant hiring some of the session musicians that had been backing Aretha on her recent records: bass player Chuck Rainey, drummer Bernard Purdie, guitarist Cornell Dupree, and percussionist Pancho Morales. Even that rhythm section is in dispute, however, as Aretha denied the devil had anything to do with the way they played.

And that is where the disputes end, because as soon as Aretha enters on the opener “Mary, Don’t You Weep,” she presides over the album. She is the choir director, the producer, the soloist, the choir member, the preacher. She hammered out the track list with Cleveland in the weeks before the performances, favoring a repertoire that mixed old hymns and new pop songs often in the same arrangements. “Precious Lord, Take My Hand” bleeds so gracefully into “You’ve Got a Friend” that it’s nearly impossible to distinguish Thomas A. Dorsey’s composition with Carole King’s hit. She swaggers through Marvin Gaye’s “Wholly Holy” as well, but the most commanding arrangement is her gospelization of “You’ll Never Walk Alone,” which had recently debuted in Rodgers & Hammerstein’s Carousel. Not exactly churchly fare, but Aretha and the musicians playing with her find the kernel of spiritual steadfastness in each one. “He walks beside you,” the choir testifies, and she interjects, “He’ll put all of his angels beside you!”

Perhaps she doesn’t mean heavenly angels. Perhaps she means earthly angels: the people up on stage with her and the people down in the pews. In those words are echoes of the Civil Rights movement, a reminder of all the marches and demonstrations that showed strength and righteousness in unity. Gospel was integral to those events; in fact, Aretha performed with Martin Luther King Jr. repeatedly both as a gospel singer and a pop star. Perhaps that connection is what made Amazing Grace so popular at the time; it’s definitely what makes the album so powerful nearly fifty years later.

“Can I get y’all to help me sing?” she exhorts the congregation on closer “Never Grow Old,” and by “congregation” I mean everyone in the church and everyone who ever listens to the album. No one can sing to the heavens like Aretha, but by inviting everyone to sing along, these performances continue to provide an example of how all of America might sing in one beautifully harmonized voice.