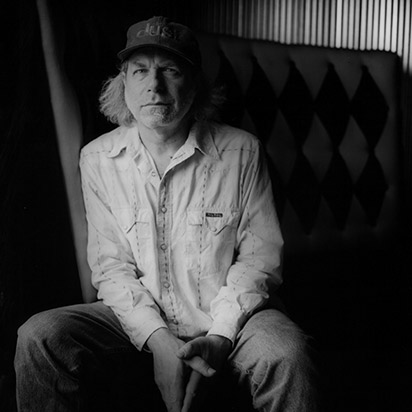 “I don’t work on things that don’t mean something to me,” Buddy Miller says, and you know he means it. After all, you can’t fake that kind of dedication. You can hear it in the music and see it on the stage, in the way he bends a note or how he attacks a mic. Here’s a guy for whom music is the main thing – not the image or the lifestyle, but the songs. To know what I’m talking about, you wouldn’t have to look much further than Miller’s own music collection. Indeed, in Americana circles, it’s somewhat legendary.  Talk to anyone who’s worked with him and they’re bound to bring up his exhaustive library.

He claims it started when he was a kid, glued to the radio, back when they played the Beatles followed by Skeeter Davis, followed by whatever else was there. “They played the Grateful Dead on the radio from time to time!” he tells me, like the very notion still blows his mind.

Once you get Buddy talking, though, you realize there’s a lot about music which blows his mind. For example, the Strange Creek Singers once performed an assembly at his junior high school. “It was basically Hazel & Alice with Mike Seeger,” he says, “which was, you know, sick.” You can hear that 12-year-old boy still impressed by what a person can do with two hands, a voice, and a noisemaker. “[It was] a school assembly – not a big school – and Hazel sang ‘Black Lung’, and they did things I hadn’t heard of before…”

Long story short, from that point on, Miller became a feverish collector of music, and a rather influential performer of it. These days, for whatever reason, his iTunes collection is “down to about 126,000 songs.” A mere 126,000. By the way, that’s about as many songs as there are people in Charleston, S.C.

“I had a bottle of wine and a screwdriver one night in the back of the tour bus,” he tells me. “I took out the CD drive [from my laptop] and put in a terabyte drive… I go on groove hunts, I call it – looking for old songs.”

It’s the old songs which are his specialty, not because he’s aiming to be hip or ironic, no. The closer to the roots of the music he can get, the better will be whatever he’s working on. Lately, that includes music for the TV show Nashville, and beginning to think about maybe, possibly – sometime in the next year or two – considering a new solo album.

“My wife is a real writer,” he says of the remarkably gifted Julie Miller. “It just flows out of her, when it does happen. Me? Once in a while I might have something but I don’t usually just sit around and play. I’d love to. I’m sure I will soon. I’m sure after this year’s over nobody will be calling me anymore. But at this point, it’s been nonstop project to project, no time to breathe … I was actually thinking this morning, gosh I should make a record sometime.”

It may have been five years since he dropped what could be considered a solo album, but that hardly means Miller’s work hasn’t been swirling around the world. From Robert Plant’s Band of Joy to any of the assortment of albums he produced last year, to his work on Richard Thompson’s new disc Electric, his mark on the evolution of Americana music is pervasive.

As a songwriter, Miller hangs in the sweet space between classic country and soul. His solo albums – and the three he’s made with his wife – are exactly Americana. No frills, no spectacle, just great songwriting performed by freakishly talented players. As a producer, he’s worked with everyone from jugbands to contemporary songwriters and beyond, preferring a “less is more” approach to the lush sound so dominant in the pop music frequently passing for Americana. Listen to something Buddy produced and you get the sense he trusts music more than anything else in the world. He’d just as soon move out of the way and let the song do its thing. It’s no wonder, then, that he spends his spare time hunting grooves.

In fact, he pulled from his groove hunts when the time came to make a collaborative disc with his old friend Jim Lauderdale (Buddy & Jim, out Dec. 2012 on New West Records). In addition to the tune his wife Julie wrote, and those Buddy and Jim wrote themselves, they populated the disc with some well-considered cover tunes. Originally, he wanted it to be an album full of Johnny & Jack covers, but that didn’t quite work out.

And with that, he’s back to being a fan –in a way which gives you the sense Buddy Miller makes music because of his reverence for it. If he ever got into the rock and roll business to meet girls or look cool, he’s long since crossed a line to where the songs are the thing. “I just like to play music,” he says at last. “I’m happy to be making music and making what, I feel, is really good music.”