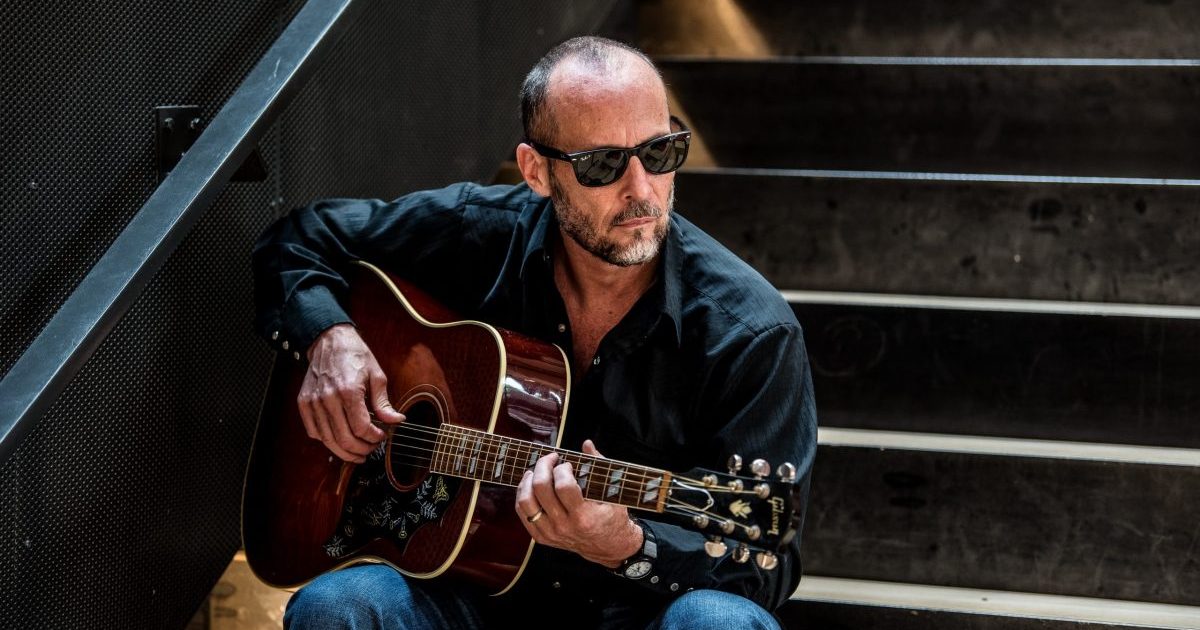 For years, you could always count on a Paul Thorn record for songs about insatiable lust and desire. That’s still true on his newest release, It’s Never Too Late to Call, although that carnal urgency has been overtaken by… yes, actual love. The long-awaited album isn’t exactly sentimental, as “What I Could Do” details the ways his life would be more productive without still being in love with somebody. There’s also “Goodbye Is the Last Word,” an aching slow song that basically offers advice on how to leave a relationship that’s turned toxic. Even the duet with his wife, Heather, is titled “Breaking Up for Good Again.”

Still, on the boisterous “Here We Go,” he sings, “I feel good about what the future holds.” As he should.

“I like to think I’ve just matured a little bit,” Thorn tells BGS. “I’m 57 years old and the way I looked at things 10 years ago ain’t the way I look at them now. If you’re still the same person you were 10 years ago, you wasted 10 years.”

On It’s Never Too Late to Call, there’s not a minute wasted. Thorn can still crank up that R&B groove that’s made him a must-see artist for decades. Meanwhile, “Sapphire Dream” – a duet with his daughter Kitty Jones — stands among his most evocative performances on any of his records. Here, the Mississippi musician tells BGS about how the acoustic guitar shaped these sessions, the bluegrass bands he admires, and what “Sapalo” really means.

BGS: Why was it appealing for you to make this album in Memphis?

Thorn: Sam Phillips Recording Studio in Memphis has a lot of vintage equipment and recording technology that kinda doesn’t exist anymore. The way that Elvis Presley’s records sounded, and the way that Johnny Cash’s records sounded, and many other great artists sounded — in addition to their talent, it was the way they were recorded and the sound that they caught from that studio.

And it’s not Sun Studios. Let me clarify that – Sam Phillips didn’t own Sun. He rented it, but then when he got successful he built another studio two blocks down called Sam Phillips Recording Studio. That’s the studio I’m talking about. A lot of magic was created in there for a lot of reasons. It’s an hour from where I live, so why not?

Did you have an idea of how you wanted this record to sound before you went in?

I really did, yeah. The producer of this record is Matt Ross-Spang. He’s a Grammy Award winner. He’s very good. I was sending him iPhone demos of me just singing with my acoustic guitar on all these songs. We both decided, after talking a few times, that this record should be built around those acoustic demos. I play rhythm guitar on every song, which is something that I used to not do. I used to not play on my records at all. I would just sing it once with my acoustic guitar and the band would play it.

Although that sounds good and it has its place, I think what we captured on this record more defines what I actually sound like and what I do best. It’s a lot more stripped down and it’s not like a jammy record. There are very few solos on any instrument. This record is all about showcasing the songs. I haven’t put a record out of original material in six years and there are a lot of reasons for that, some good, some bad. But I feel like over those years, these songs that I did get are my best work ever. I really feel that way.

Are there any acoustic guitarists that you really look up to?

I know two people who, in my opinion, are the greatest acoustic guitar players. One is Mac McAnally and the other one is Tommy Emmanuel. They’re not only great guitar players but I’m friends with both of them and I know them personally. They’re the monsters! And I mean that as a compliment. I’m not really a great guitar player but I do a thing that’s unique to me. Tommy and Mac, they can sit down and play with anybody. I can play good with myself but I don’t know how to follow other people. These guys are on another planet, as far as guitar players.

Are you a bluegrass listener?

I grew up around two types of music as a child. My dad was a preacher so I grew up around black gospel music and white bluegrass gospel music. You know, there’s a group named Balsam Range who recorded a song I wrote called “Angel Too Soon.” They had a No. 1 on the bluegrass charts and it stayed there a long time. I’m clearly not a bluegrass artist, but I have had songs covered by a top bluegrass artist. So, I have that in me. And when it’s done right, I love it Another group that I’m a big fan of — and in my opinion they do it as good as anybody — is The Isaacs. They do bluegrass gospel and when I watch them, I’m looking at excellence.

On this record, you start out with a couple of mellow songs but then you hit that R&B groove on “Sapalo.” So, I have to ask, what does that title mean?

I was watching a video on YouTube of James Brown, and before I clicked on it, the description said “James Brown High on PCP.” The premise of the video is that he’d just gotten out of jail and he was being interviewed by a very straight-laced lady, a local news anchor. It was clear from the get-go that he was high on drugs while he was doing the interview. She said, “Mr. Brown, how are things now that you’re out of jail?” She said, “How do you feel now?” And he goes, “I feel good! I look good! I smell good! It’s all good! I make love good!” He was saying all this off-the-wall stuff. Then she said, “What are your upcoming plans?” And he said, “Well, I’m going to Brazil. I’m going to São Paulo!” He said, “We’re going to JAM!”

So I was just writing down all of this stuff he was saying, and the song wound up being a song about redemption. At least in that moment, he was claiming that he had put his life back together, which he was lying to himself because he was on TV high on PCP. But I tried to spin it as everyone needs a shot at redemption. It’s about being optimistic with whatever time you’ve got left.

Listening to “You Mess Around & Get a Buzz,” I caught that Clarksdale reference right off. I know that being from Mississippi is a big part of your story, and I’m curious if you ever feel like you’re an ambassador for the state.

Well, I would only say this because you brought it up but I guess I am in some way. When I use the word “ambassador,” to me that means somebody who goes abroad and tells other people about how good it is where he lives. So, in that way I guess I am. I was very flattered a few years ago when the state of Mississippi invited me down to the capitol and they declared March 27 as Paul Thorn Day. So, I got a day! You know, most times you gotta die before you get a day.

You’ve got the same hometown as Elvis. I’m wondering, if you could have pitched him any of the songs you’ve written, which one would you pick?

That’s a hard question, man. I tell you, I wrote a song called “That’s Life.” All the words in that song were words my mother has said throughout my life. I’ve played it a lot and people like the song. If I could get one song recorded by Elvis, it would probably be “That’s Life.”

Your fans often become characters in your songs, too. It happens on this album on “Sapalo” and “Holy Hottie Toddy.” You’ve cultivated one of the most loyal fan bases that I’ve seen. What are some of the things you’ve done right, to keep people invested in you and your career?

That’s a hard question but if I had to answer, I think to get down to the brass nuts of it, they know I love them. You can say that, but a lot of artists will do their show and they walk off the stage and they’re ready to get to the hotel room. I understand that. I feel that way sometimes myself, but at every show – prior to the pandemic – on the last song I always go out into the crowd. And while I’m singing I’m hugging people and shaking people’s hands. And when that’s done I go out in the front and sign CDs and take pictures. I’ll stand there until the last one’s gone.

I don’t do it as a career strategy. I do it because those people got off work, got a babysitter, took a shower, bought a ticket, and they’re going to spend their whole evening with me. And my job is to give them my whole evening. That’s what I try to do. I think that’s why they stay with me, and I think that’s why they’re loyal. They’re loyal to me because I’m loyal to them.