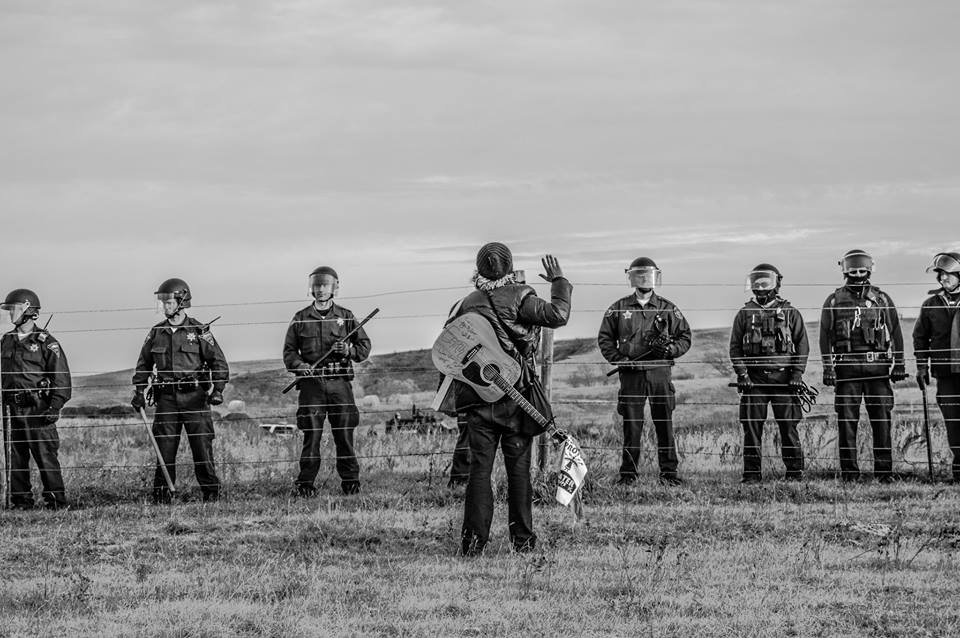 "Let us put our minds together and see what life we can make for our children." — Chief Sitting Bull

I wrote this song after reading Bury My Heart at Wounded Knee — a book about the abuse and destruction of the Native people in the name of American Expansionism. Everyone knows that white people did bad things to Indians, but when you read the details of it happening over and over, it's hard not to feel like you've inherited a legacy of treachery and deceit.

How does this basic fact of American History continue to be ignored? The freedoms we enjoy and the private property we take for granted had, at their root, at least some level of ignoble chicanery. Treaties were drawn up and revoked as soon as new resources were discovered. It happened over and over again.

I'm white. I'm privileged. I can't take back the past, but I do feel culpable for the freedoms of the present. Once again, Indian land is being threatened by the private interests of the wealthy and powerful. This time, it's happening on the Standing Rock Reservation in North Dakota. The Dakota Access Pipeline — originally slated to cross the Missouri River near Bismarck — was diverted to within half-a-mile of the reservation because of concerns about the pipeline's potential impact on the state's drinking water.

The tribe says it was not adequately consulted, and the result has been protests, arrests, and escalating violence.

Watching the news, I see policemen lined up in riot gear while, behind them, bulldozers carve up land upon which buffalo once roamed. Apart from the specific threat, people are frustrated — I am frustrated — that this is one more example of the government putting corporate interests over the health and well-being of human beings. This time, those human beings are American Indians: One can't help but hear in the bullhorns of the National Guard the echo of the countless broken treaties, the war cry of Crazy Horse, the snap of the necks of the 38 Native American men killed at Mankato in the largest public execution in American history.

I wrote this song about Chief Sitting Bull, the gifted Hunkpapa Sioux leader. He was his people's great unifier — first in the Great Sioux War of 1876, and later against General Custer at the Battle of Little Bighorn.

For a time, his celebrity was international — he toured with Annie Oakley as part of Buffalo Bill's Wild West Show. He was present in Golden Spike, Utah, at the ceremony commemorating the completion of the first transatlantic railroad. And, in 1890, he was murdered outside his home, on the Standing Rock Reservation … the very place of the present crisis.

Earlier this year, I was lucky enough to record parts of "Last Man Standing" in Standing Rock, near where Sitting Bull is buried today. The weather was bitterly cold when I was there, but I managed to play his song for him, at his memorial, on the banks of the Missouri River.

Sitting Bull is a hero to me. And, while I'm not an Indian and will always be on the outside of the proud tradition of the Sioux Nation, I hope that my song does some honor to their leader and lends a defiant and hopeful voice to the protestors and to the people they represent. — Korby Lenker

100 percent of the proceeds for song downloads will go to the STANDING ROCK SIOUX TRIBE: DAKOTA ACCESS PIPELINE DONATION FUND.

Oh mother mother, let me tell you somethin'
White people gonna know my name
The big general think he up-and-comin'
That man got nothin'
I had a vision in the middle of the night
The Great Spirit come down on me
So Custer's in for a big surprise
A bullet between his eyes

I am the last man standing