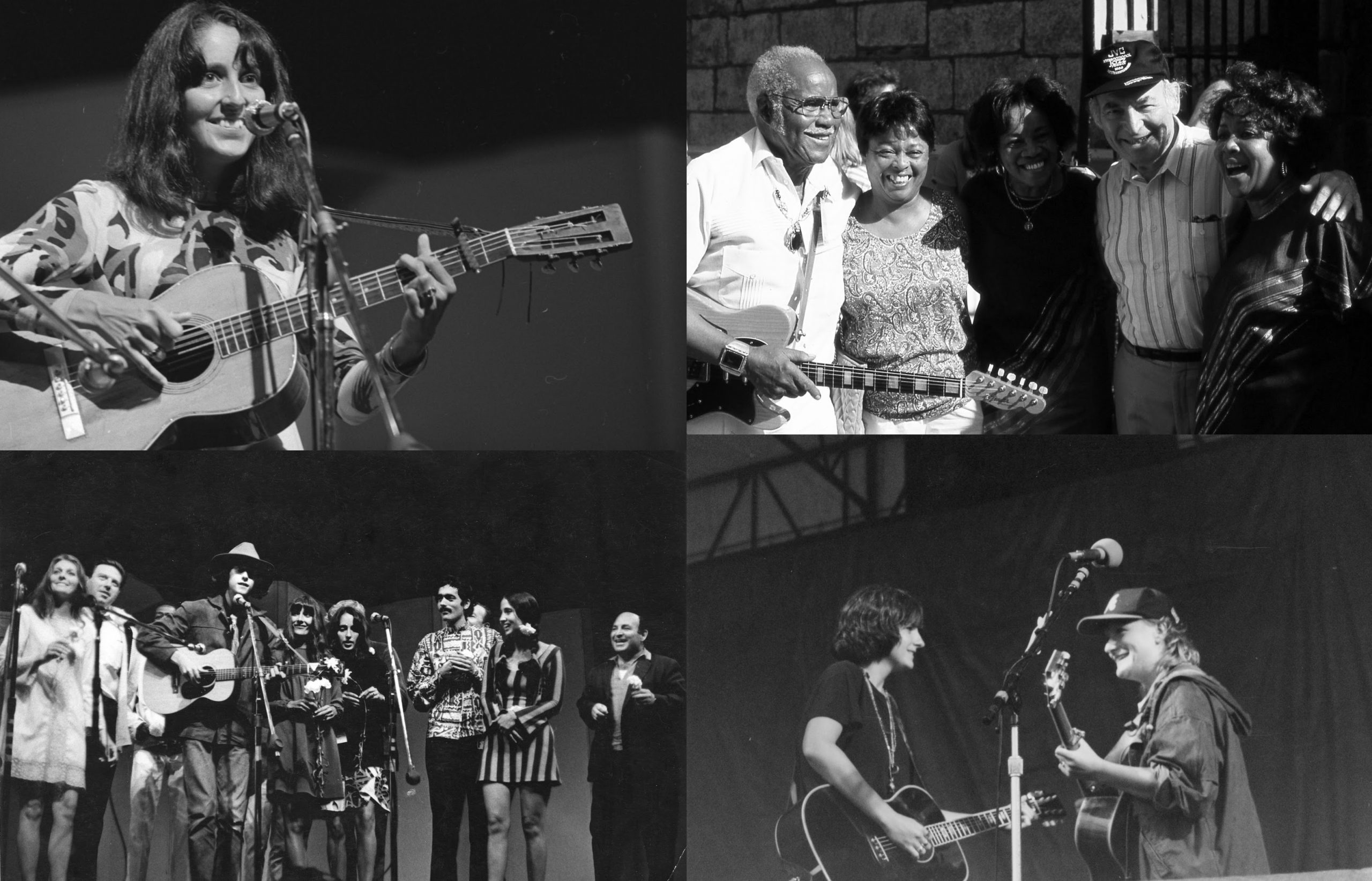 To celebrate the release of his book, I Got A Song: A History of the Newport Folk Festival, and this year’s upcoming event, Rick Massimo rifled through his memory (and notes) and put together a list of some of Newport’s most memorable mainstays from across its 58-year history.

Because you can’t start with anyone else. Pete Seeger wasn’t always an official organizer of the Newport Folk Festival, but he was the guiding light, the conscience, from the beginning, and in many ways, even though he’s no longer with us, he still is. “America’s tuning fork” is what Studs Terkel called him in the introduction to this performance, and who’s gonna argue with that?

Bob Gibson with Joan Baez — “Virgin Mary Had One Son”

Also from the first festival, this was Joan Baez’s major-venue debut. She was 18 years old and wasn’t on the bill, and she knocked the crowd unconscious. “I didn’t faint; I sang, and that was the beginning of a very long career,” she said years later. Gibson was later credited with discovering her — he scoffed and said that was like being credited with discovering the Grand Canyon.

Coming at the height of the Civil Rights Movement, this was one of the defining moments of the early days of the Newport Folk Festival. “We felt we were speaking to the aspirations of our country to be a moral nation,” Peter Yarrow told me, remembering the moment. “And, for that reason, it was a very precious experience.”

If someone only knows one thing about the Newport Folk Festival, it’s probably about Bob Dylan going electric for the first time there in 1965. Did some people boo? Did some people love it? Did Pete Seeger say he wanted to cut the PA cables with an ax? Did he deny saying that? The answer to all of these questions is “yes,” and the chapter I wrote about this night is structured like a narrator-less documentary: It didn’t take me long to realize that the thousands of refractions of this performance, through the thousands of eyes who saw it, was in fact the real story … much realer than any one interpretation.

After Dylan’s electric performance, he was done with Newport. And as he moved into rock, the folk movement that sustained Newport’s early days deflated. The festival disbanded from 1970 to 1985. That’s not to say there wasn’t some great music made at the late-‘60s festivals, and Guthrie debuted his signature song at Newport. It went over so well, they brought him back to do it twice more that weekend, in front of steadily larger crowds.

Written by Joni Mitchell, who played at the last of the “original” Newport Folk Festivals in 1969 along with a passel of future legends including Van Morrison and James Taylor. Collins was a long-time Newport board member and one of the headliners when the festival was revived in 1985 as something of a statement by a generation of singers and songwriters who had seen the pop landscape pass them by but still had plenty left in the tank, in terms of both creativity and popularity.

They dominated the Newport Folk Festival in the 1990s, playing nine times in 10 years and packing Fort Adams each time. They loved Newport as much as the festival loved them: They once took a year off live playing with the exception of the festival, and Amy Ray told me that her favorite memories of Newport involve not playing but soaking up the music, the friendships, and the traditions.

The Avett Brothers — “Talk on Indolence”

The 2009 Newport Folk Festival ended with Jimmy Buffett — yeah, I know — and as the Parrotheads took over Fort Adams, other fans left in droves. The Avett Brothers were playing on the stage set up right by the exit, and gobs of people got introduced to their power, speed, and sense. I was recently asked which Newport performances were my most memorable, and I could only answer that what sticks out most is seeing an artist go from the smallest stage to the biggest over the course of a few years. That’s true of the Avetts, Old Crow Medicine Show (who looked about 12 the first time I saw them), and of course …

This Rhode Island-based group’s first Newport experience wasn’t a show — it was rambling through Fort Adams bagging up the recyclables for Clean Water Action. But they gave out demos by the handful while they were doing it. The next year, they were on the smallest stage, and it wasn’t long before they were on the main stage, mystifying and captivating as ever. I still recall Ben Knox Miller and Jeff Prystowsky tossing a baseball around Fort Adams long after their first festival as performers was over. They clearly didn’t want it to end.

Also from Rhode Island, Deer Tick and John McCauley may be a little louder than the typical image of a folk festival, but they’re Newport to the bone, including reviving the tradition of late-night shows at several nightclubs downtown after the festival is through for the day at the Fort. Informal and spontaneous collaborations are the rule at the nighttime shows, and a kind of community feeling reigns.

Jim James is a new Newport mainstay, and few people have more respect for the traditions of the folk festival. “For me, [Newport] is the festival that you go to for two or three days, and you get lost in the world of it,” he told me. “… you’re playing looking at the water, looking at all the boats. It’s like everything’s drawn in pastels or something.”

Dawes — “When My Time Comes”

MixtapeJul 11
MIXTAPE: David Newbould’s Songs for Sinking In / Digging Out