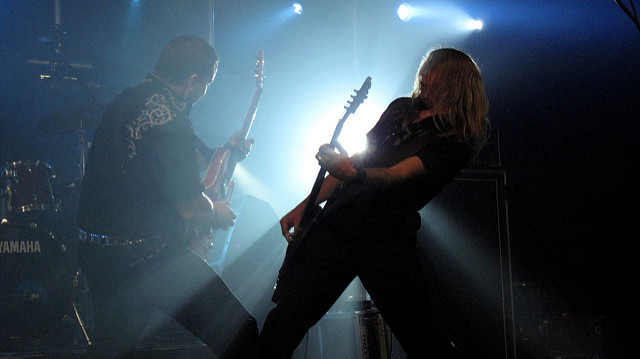 Essential elements of tantric sex include preparing a space; focusing mentally, physically, and emotionally; building energy; and breathing in and out simultaneously while looking into each other's eyes. “It’s a textbook definition,” says Kadampa Center director and sex guru Smitha Patel. “We’ve all seen and felt the energy when two guys face each other onstage, frenetically sliding their fingers up and down fret boards trading solos in an extended jam.”

Other similarities, Patel notes, include choosing a position that heightens your connection with your partner and, preferably, allows you to maintain eye contact without losing the consciousness of the act.

“When you look at the techniques of dueling solos and tantric sex side-by-side, you’d have to be a completely repressed Westerner not to agree,” Patel adds.

When presented with the parallel nature of these sacred acts capable of elevating participants to a higher spiritual plane, touring acoustic band String Break, slated to play at the center that evening, took notice of the correlation.

“I guess live shows are all about staying focused and grounded in the moment and patiently allowing energy to build within yourself and your connection to the other musician resulting in a climax a few hours later,” says a band member who wished to remain anonymous. “Huh.”

“Most audiences are full of sweaty, long-haired men swaying in close proximity, often shirtless or wearing only vests,” notes Patel. “Freud might have had something to say about the sexual energy of hoards of men staring at two guys rhythmically strumming their instruments and communicating only with their eyes. It is easy to be confident in our classification.”

In addition to running the meditation center, Patel is a contributor to the newest edition of The Art of Sexual Ecstasy which will include a chapter on dueling solos. Look for the book to hit stores this Fall.