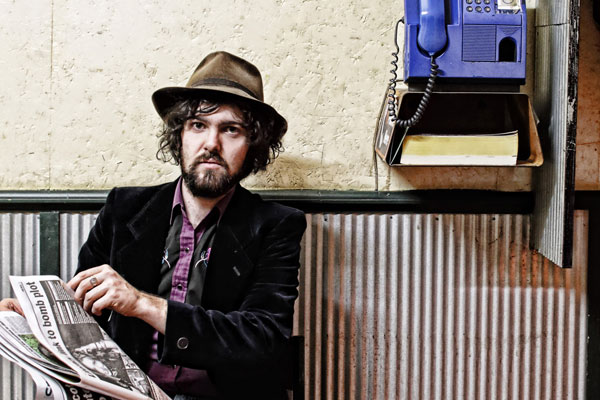 JORDIE LANE might not be a familiar face right now.  But depending on what continent you’re on, that could be a different story.  In his native Australia, Lane’s music is well recognized (he just wrapped a national tour with Billy Bragg before landing in Los Angeles).  He’s a young man with an old soul and an honest sound, harkening back to Graham Parsons and Bob Dylan.  And before he breaks out stateside, he shared his personal side with The Sitch in our latest Ten Questions….

What are your musical origins?

I was born into a theatrical family. But it almost wasn’t anywhere near that! You see, before I was born my Dad was in medical school, but one day he dropped out and become a clown. My Mum was an English high school teacher, but quit after a head on car accident and joined a theatre troupe. So I grew up on the road, watching them sometimes dressing in drag, playing in marching bands, singing in Cabaret shows and so on. My mum is a brilliant story teller around the dinner table and went on to become a well known comedian in Australia. And so, the seed was planted. When I was 10 I got an electric guitar and began writing songs straight away with my two best mates at school. We tried to play rock’n’roll and I was also heavily influenced by Rap and Hip Hop.  It wasn’t till my late teens though, that I truly got into Folk and Country and bluegrass music and began embracing those styles in my own songs.

My Mum, a comedian/writer storyteller who inadvertently taught me the ways and means of storytelling through our family dinners when I was growing up.

Musically they are varied. I guess the most important ones are Nirvana and Ice Cube, to Bob Dylan and jimmy Hendrix. then Gillian Welch to Old Crow Medicine Show.

How would you describe Jordie Lane’s sound?

A kid from the suburbs, who always longed to be an old man out country. Singing raw but rich; picking plain but true.

If you didn’t live in Australia, where would you live?

Right now the answer is…right here in LA, not too close into town though. I like these hills in the north east.

What is your favorite venue in LA?

Would have to be Norman’s Rare Guitars out in Tarzana.

1950-60.To have been in this decade following the end of World War ll would have been the most exciting time. I could have been on the road with Kerouac, been in the back room when Elvis was cutting his first stuff at Sun Records, watched Rock’n’Roll be born. Technology was opening doors like crazy, the energy would have been amazing.

I’m about to head off to Toronto for the Folk Alliance Conference,

playing a mammoth 16 shows in 4 days from February 20.

And I’m continuing work on my next album, before a big run of touring shows and festivals back in the motherland, Australia, through March, April, May.