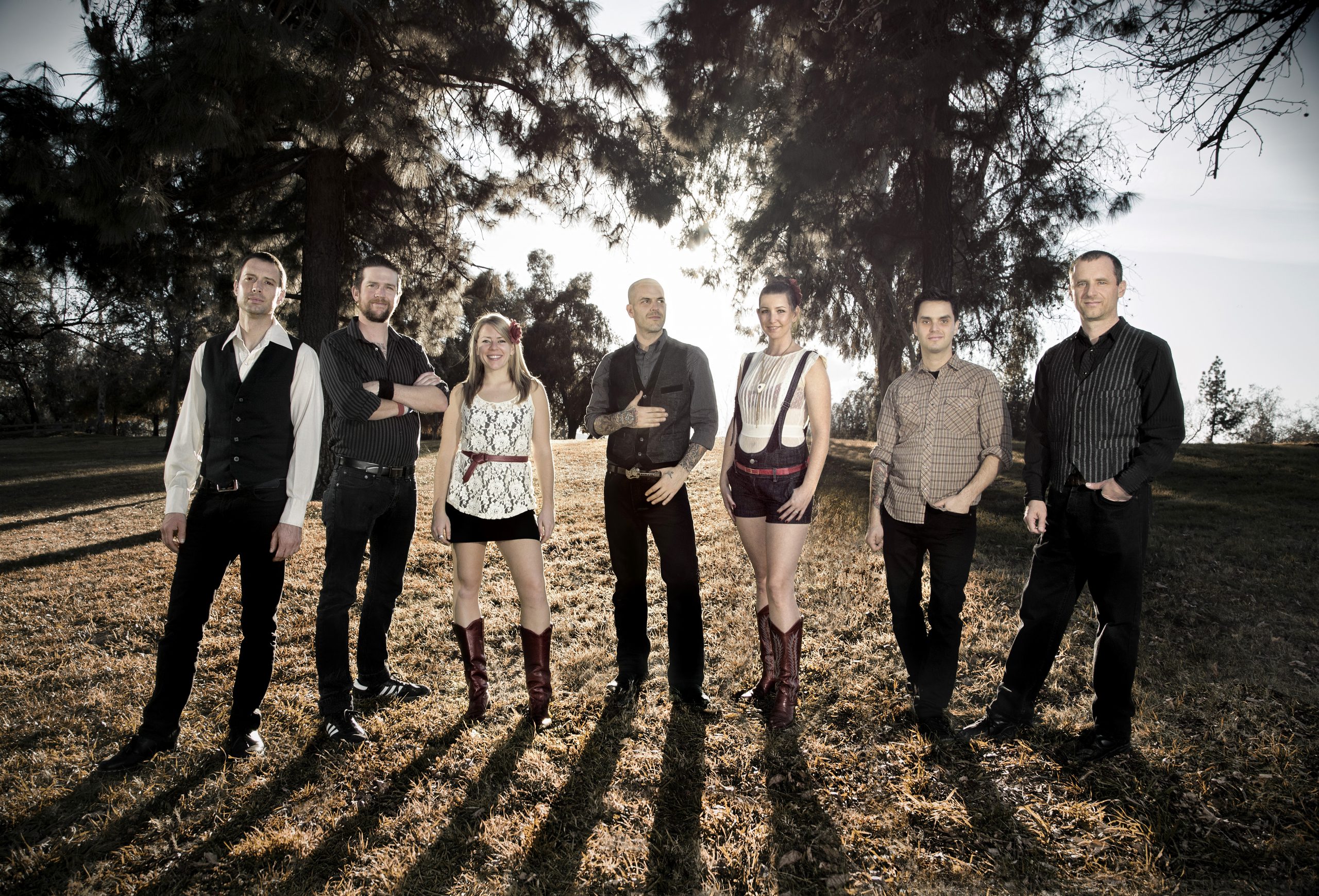 The words punk and bluegrass might not seem to compliment on another, but LA-based septet, OLD MAN MARKLEY, is showing everyone how it’s done.  Band members Johnny, Annie, Joey, Jeff, Katie, John, and Ryan just announced they will be supporting Dropkick Murphys on their national tour starting February 21. OMM’s sophomore album, Down Side Up, is out March 5, but you can download their first track for free here.  The Sitch got to know the intimate details of the punk-grass group in TEN QUESTIONS…

What are the origins of Old Man Markley (and where does the name come from)?

Annie:  It all started at a party that Johnny and I threw for Ryan’s birthday. All our friends played music in the living room with instruments we had around the house. It was the start of something fun… That night I think there were about 30 members of the “band.”  Luckily, we thinned the herd and are now seven strong.

Joey: We had our first jams in Van Nuys back in August of 2007. It was a bunch of friends and musicians from LA punk bands who wanted to try something different from the distortion guitar sound we were accustomed to. Things kinda developed from there. Ryan Markley, our esteemed washboard colleague, while young and strapping, suffers from back pain now and then, earning the name of ‘Old Man Markley.’

What are your biggest influences (personally and for the band in general)?)

Annie: Personally, my love for bluegrass and folk music stems from the musicians’ campouts that my family used to attend out in Malibu when I was a small child.  The folks would play music around the campfire all through the night.

Katie: My approach to music was also grounded in family jams and festivals we attended when I was young. My parents are amazing musicians, and by far the biggest influences on my playing. As far as the band in general, I think OMM follows the very American tradition of starting with a shared foundation (in our case, the bluegrass repertoire as well as lots of punk music), and then branching out from it to create something new.

Joey: Personally my biggest musical influence is my dad Alonso who played drums for 50 years. In Old Man Markley my influences bounce around a bit. I love the Old Crow Medicine Show sound, but I’m more inspired by punk bands like NOFX or Off With Their Heads who carve their own niche and truly have a simple yet unique sound and songwriting style. I’m a big James Jamerson (Motown) and Karl Alvarez (Descendents) fan when it comes to bass playing. I would say my favorite current songwriters are Frank Turner, Fat Mike (NOFX) and Laura Jane Grace (Against Me!). My all time #1 all around favorite is and will always be Billy Joel.

How would you describe the OMM’s sound?

Annie:  A German reviewer really hit the nail on the head with this description:  ‘Banjo punk soaked in a picture book, from minute one to seven in richer party liquor.’  I don’t think I could write a better description.

Katie: What she said. (That he said.)

If you weren’t based in Southern California, where would you live?

Annie: I’d live somewhere in New Mexico… I have loads of family there, and it is the “Land of Enchantment.”

Joey: If I didn’t live in SoCal I would be in bay area, San Francisco or Oakland. I live and grew up in SoCal but my whole family lives there now and it’s always been my second home.

John: I can’t speak for the rest of the band, but if I personally wasn’t based in SoCal, I’d be living in NYC, where I was born and lived till I was 11.  The majority of the band members were born and raised in the San Fernando Valley region of LA.  I’m not sure how they’d feel about living in NYC, but I know I’d thrive there.  I’ve always felt most at home in big cities.  Then again, unless I had the bucks to jet between coasts whenever I liked, I can’t imagine it being too practical for one band member to live 3,000 miles away from the rest of the guys/gals.  It’d really throw a monkey wrench into our rehearsal schedule.

What is your favorite venue in LA?

Annie: Well, it’s not exactly in LA, but the Slidebar in Fullerton has great FREE Sunday matinee shows!

Katie: House of Blues for the parking, Troubadour for the history.

Joey: Troubadour hands down. Best sounding venue to see a show and a great place to play.

Johnny: The Henry Fonda is rad.

Annie: My favorite spot was the Blue Ridge Pickin’ Parlor, but it closed a few years ago.

Katie: Canterbury Records. My mom and I went there the last time she was in town. She was so stoked that they had our music. She took a picture of Old Man Markley stocked alongside Old Crow Medicine Show.

John: My favorite music store in LA is McCabe’s Guitar Shop.  McCabe’s has been a staple in the LA acoustic/bluegrass/folk scene since 1958.  It’s been a part of my life since I was 13 years old.  Around that time I had, on a whim, picked up a copy of Mel Bay’s ‘Fun With The Banjo’ at a local music store.  Back at home, I tuned my brother’s guitar to a banjo and started teaching myself chords from the book.  When my dad came home that evening and saw what I’d done, he decided we’d go find a banjo for me that weekend.  McCabe’s was, and still is, THE place to go for banjos in LA.  My dad found their ad in this thing called a phone book.  They offered free coffee and that’s what sold him.  We got a cheap banjo from them and shortly thereafter I started taking lessons there.  And now, in a weird ironic twist, I’m the banjo teacher at McCabe’s.  But it was my favorite music store long before I started teaching there.  There’s just no other place like it in LA.  They have great concerts, too!

Ryan: Against Me!, Off With Their Heads, and The Book Of Mormon Soundtrack

Joey: The Book of Mormon Album

Johnny: Platinum Patron with a Corona back

Annie: The 40’s… I would just love to experience LA before all the freeways and commercial buildings.

Katie: Right now, or sometime in the (hopefully) near future when we’ve progressed from these gay marriage debates and started granting civil rights where they are due, when we’ve rewritten gun laws and installed solar panels on every house and tour bus, and generally gotten our act together. Also, I’d like to be around for recreational space travel (and time travel, so Annie and Jeff can go back in time).

Johnny: 60’s. I would have loved to see The Beatles play.

Katie: Dinner at my friend Morgan’s house. She lives in the Valley and runs Pi Bake Shop. She’s the best cook I’ve ever met, and if I’m lucky, maybe she’ll see this and invite us over. I’m hopeful that she will, since I plan on sending her the link.

Joey: Lobster at the Chart House