TEN QUESTIONS FOR… Snap Jackson & the Knock on Wood Players 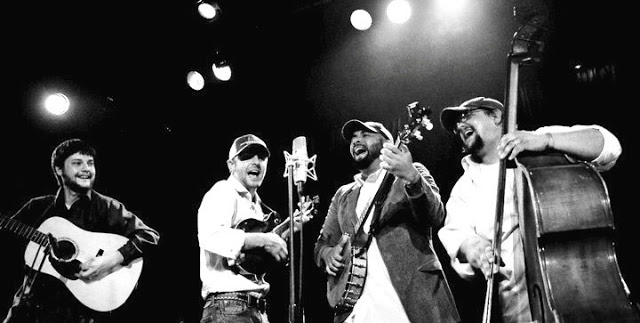 Two months back, the southland was graced by the first So Cal performance by Stockton’s award-winning Snap Jackson and the Knock on Wood Players.  Snap (whose real name is Antonio–the Snap part comes after being a photojournalism major in college) just returned from the International Bluegrass Music Association‘s World of Bluegrass conference in Nashville, Tennessee, where he and the band were highlighted in several artist showcases.  Prior to their trip east, Snap caught up with BGLA about his musical roots and a few of his favorite things…

Can you describe your roots in bluegrass music?

Snap:  I was raised in a R&B and soul household on my mom’s side, while my dad raised me with singer songwriter stuff.  I got into bluegrass before I really knew what it was… when I was 11 years old, my best friend Alex introduced me to the Grateful Dead.  That was the beginning of my education with 1960s psych rock.  I totally dove in to the Dead eventually segued into Jerry’s side stuff.  According to Alex, the first time he played me a tune with Jerry on banjo I told him ‘I’m going to do that.’

Later on I fell in love with the acoustic string band sound.  Pete Seeger, Elizabeth Cotten, etc.  And then Alex (him again) introduced me to John Hartford’s Mark Twain, which is what made me want to do that music.  Within a week, I had bought a banjo.  From that moment on, I just stuck with it.

Who are your biggest musical influences?

Aside from Jerry and John, my biggest influences are Townes Van Zant, Nina Simone, Joni Mitchell, Marvin Gaye, Stevie Wonder, early Bob Dylan, the list just goes on and on….

Where does the name ‘the Knock on Wood Players’ stem from?

Well, once I was adept at banjo, I just wanted to get some songs recorded.  The plan at the time was to just have an album called ‘Snap Jackson and Friends.’  But the first track was called ‘Knock on Wood,’ and once Shane [Kalbach, on fiddle] joined me for some recording, something just clicked.  Those jams and recordings turned into a band.  By the time we’d recorded the album [with Brian Clark on bass], we were being offered gigs, travel, etc and the Knock on Wood album became the Knock on Wood Players.  Has a nice ring, doesn’t it??

What are your favorite venues to play in California?

Snap:  San Francisco’s Slims and the Plough & Stars, Marilyn’s in Sacramento, the Blackwater in Stockton, and the Mendocino Theatre.  I’m sure there’s many more, but those are the first to instantly come to mind.

What are your favorite music stores in LA?

Snap:  My favorite Southern Cali music store has to be McCabe’s in Santa Monica. They always have a ton of great instruments on hand and encourage you to take them off the wall and pick ’em.  Having a whole room dedicated to banjos is a huge plus!

If you weren’t based in Stockton, where would you live?

Snap:  I have always been drawn to Oregon.  I have been very fortunate to spend a lot of time out there in the past few years and every time I’m there I love it more and more.  The last time that we played a few nights out there, I almost didn’t come home!

If you could go back to any decade, what would it be?

Snap:  My top three, aside from the banjo of course, would have to be reading, drawing, and photography.

Snap:  Hands down, a barbeque at my cousin’s house in Azusa.

Snap Jackson and the Knock on Wood Players frequently play throughout California, but you can often find them around their home turf of Stockton and San Francisco.  Snap (who is endorsed by Deering Banjos) anticipates a new album from the band in the next year.  You can always check out their site, http://knockonwoodplayers.com/, for updates on their tour and recording.