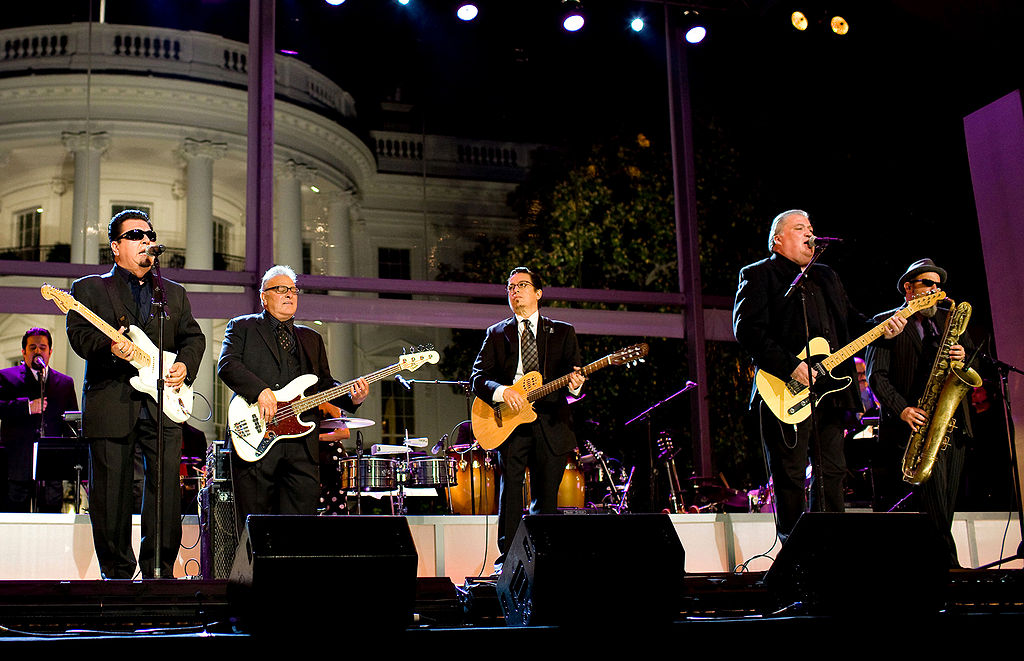 Just Another Band From East L.A.

Well, not exactly. The sextet that is Los Lobos has been one of the most influential bands on the American music landscape for the better part of 40 years, a group that’s combined the roots of Mexican Tejano music with the energy of American Top 40 to produce their own unique sound.

The story of Los Lobos begins one day in the early '70s at East L.A.’s Garfield High School, where singer and guitarist David Hidalgo and drummer Louie Perez discovered they had a common love of writers like Randy Newman and Ry Cooder. With bassist Conrad Lozano and guitarist Cesar Rojas joining the fray, the core of Los Lobos was born somewhere around 1973. Squeezing dirt cheap recording sessions and weekend wedding gigs in-between their day jobs, the band — with the addition of saxophonist Steve Berlin — played throughout L.A. during the '70s until they scored a night opening for Public Image Ltd. in 1980. By that time, the band had long forsaken Top 40 covers and were experimenting with their signature blend of traditional Mexican music and three-chord rock 'n' roll.

Their critically acclaimed 1983 EP, … And a Time to Dance, was followed the next year with their breakout major label release, How Will the Wolf Survive?. The heart-breakingly beautiful song of Hispanic life in America, “One Time, One Night,” appeared in the movie Colors and provided the anchor for another highly acclaimed record, 1987’s By the Light of the Moon. That same year they recorded their ubiquitous cover of Richie Valens’ “La Bamba” and found themselves touring the world with the likes of the Grateful Dead and Bob Dylan. In 1988, they returned to their roots with La Pistola y El Corazon, an album completely in Spanish that won the band a Grammy in 1989.

The '90s found Los Lobos experimenting with darker, noisier sound, and yielded three of their very best albums: The Neighborhood, which included appearances by Levon Helm and John Hiatt; the beautiful Kiko; and the rugged Colossal Head. Since the turn of the century, the band have done a 10-spot’s worth of albums, though new studio material has come less frequently, with cover albums and live sets becoming more common. The one truly exceptional studio piece from that era, The Ride, includes some fabulous cameos by the likes of Tom Waits and Mavis Staples.

In The Encyclopedia of Popular Music, Colin Larkin refers to How Will the Wolf Survive? as “the critical breakthrough album for a refreshing sound that created Tex-Mex rock ’n’ roll.” That might be overstating the case a bit; the Lobos, themselves, would likely agree that Richie Valens was the architect of "Tex-Mex rock 'n' roll." But their fresh take on that sound has been built into a repertoire of touching narratives of life in Hispanic America blended with have-a-blast rock 'n' roll to form a legacy of tremendously influential music.

Here’s a concise playlist of the essential Los Lobos tunes.