The Rise of the Front Woman 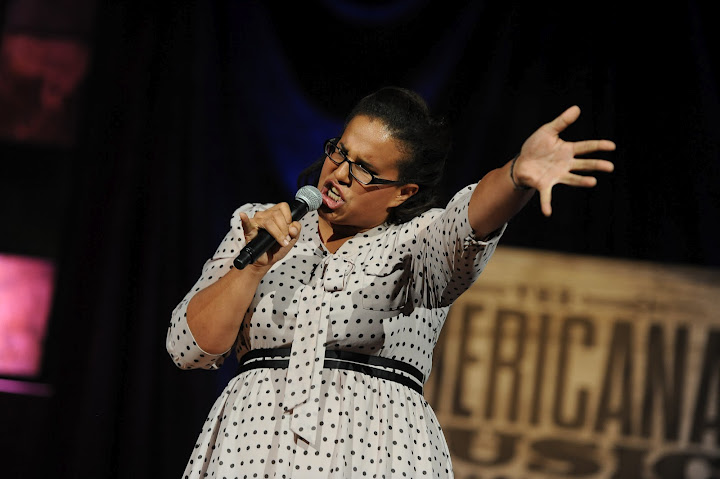 Okay, I know what you’re thinking – a powerhouse woman behind the microphone is nothing new.
Aretha? Whitney? Mariah? Been happening for ages.

Of course there are plenty of ladies out there whose voices come blasting through your speakers, but all these artists tend to be solo acts singing under their own name. What I’m talking about is the rise of the woman standing in front of a band, rocking the hell out of a show with the energy and attitude of any good front man, and insane vocals to boot.

Personally, I’ve always loved a good female anthem, but in the past that seemed to relegate me to “chick rock” or pop music. But recently I’ve noticed a dramatic uptick in the number of bands making headlines that have been fronted by a woman. Even acts that have been around for a while — like Grace Potter and the Nocturnals, suddenly seem to be on everyone’s radar. Anyone who has seen them live knows that Grace fully rocks out, exhibiting a powerful combination of sexy and strong. Simply put, the chick is badass. No one’s watching that performance and walking away thinking they’ve seen anything less than a down and dirty rock show.

Take a look at the recent success of Alabama Shakes. The four-piece ensemble features three men and one front woman – the immensely talented Brittany Howard. The girl sings with soul, grit, and pure skill. The band isn’t a showcase for Brittany to sing about her boyfriend, or a night out with the girls – instead it’s true southern rock. With their 2012 release Boys and Girls, the band’s notoriety seemed to skyrocket overnight. Their shows started selling out instantly, always receiving rave reviews from fans across the board. At last year’s AMA Awards in Nashville, the girl went on stage — alongside the likes of legends like Emmylou Harris and Bonnie Raitt — to pay tribute the incomparable Levon Helm and KILLED IT.

The success of acts like Grace Potter and Alabama Shakes seem to be setting the stage (no pun intended) for similar acts to make their moves. This past week I was lucky enough to see Lake Street Dive open up for Josh Ritter in Los Angeles. For those who don’t already know – Lake Street Dive is a group of four insanely (and diversely) talented musicians fronted by Rachael Price. It has been a good long while since I have seen a venue as full as this was for an opener, and seen a crowd as into it as they were while watching Lake Street Dive. Rachael has a seriously monstrous voice that fills the room and gets under your toes to make you stand up and dance (honorable mention also goes out to Bridget Kearney, formerly of Joy Kills Sorrow, who doesn’t let her gender or stature keep her from rocking the hell out of the upright bass). Watching Rachael and company slay their set was inspiring – and I couldn’t help but hope it whet the appetite of the crowd for more powerful female performances.

Whether you chalk it up to women finally breaking the glass ceiling of blues and rock, or just to plain old fashion talent – it’s clear that the female front woman is making her move and doesn’t plan on going anywhere. So to the girls out there turning it up to 11 – keep doing what you do, the world is clearly ready to listen.