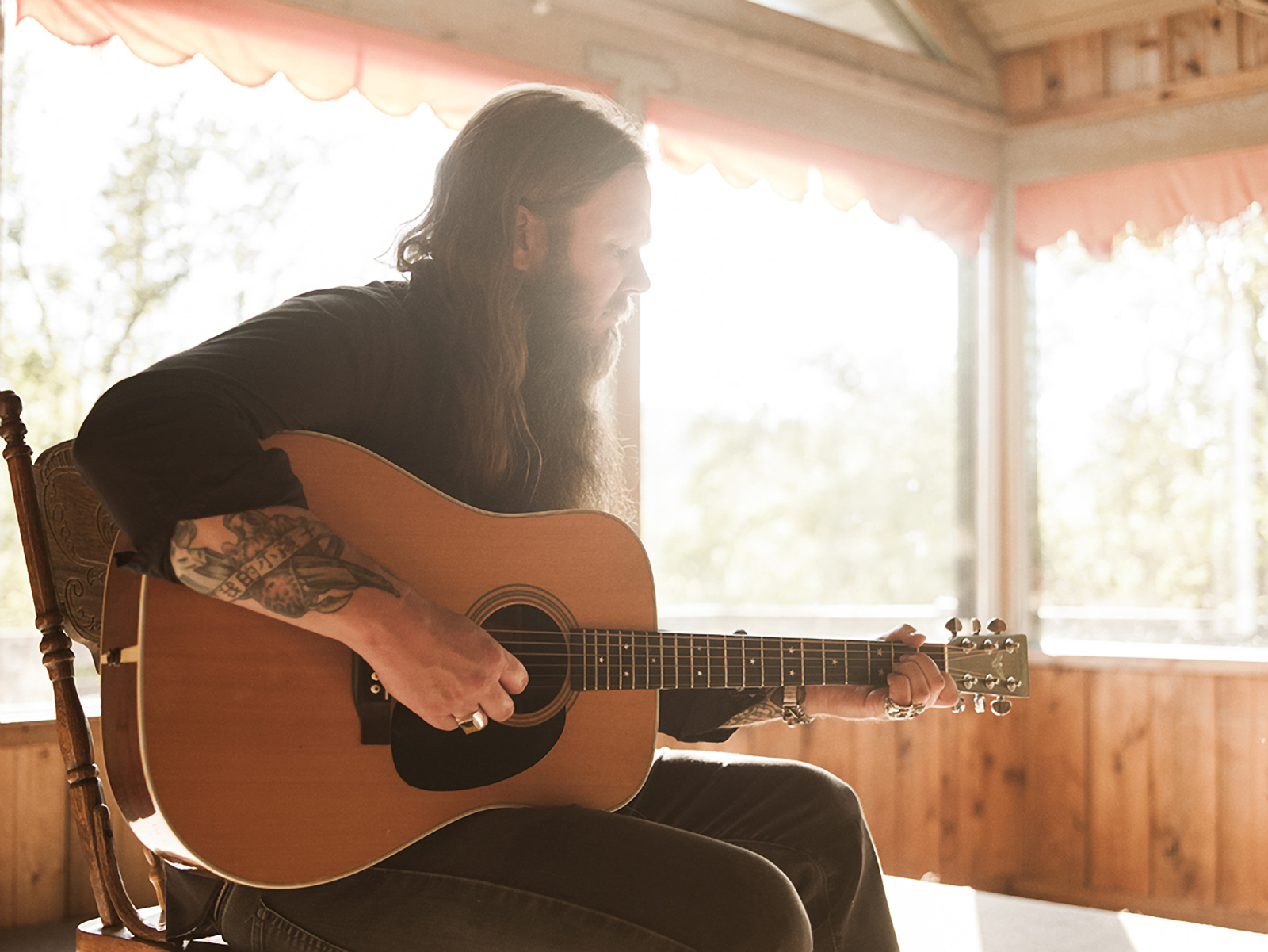 Few bands deserve the sometimes-dubious title of “Outlaw Country” like Whitey Morgan and the 78’s. But after nearly 15 years of non-stop touring and boozy, honky-tonk rocking, the words of Rodney Crowell’s prescient “I Ain’t Living Long Like This” are starting to hit close to home.

With the Flint, Michigan-based band’s gritty fourth album, Hard Times and White Lines, Morgan takes a step back to examine his own fast-living ways — doing so with the same hard-edged-but-classic country sound and unflinching honesty his fans have come to expect. Alongside Rust Belt ballads like “What Am I Supposed to Do,” Ray Price-inspired two-steppers like “Around Here” and a trouble-brewing cover of ZZ Top’s “Just Got Paid,” Morgan and company offer some candid thoughts on the lifestyle they’ve become known for.

I can tell the album title speaks to your reality as an artist. But it’s interesting that your first album was called Honky Tonks and Cheap Motels, and now we’re at Hard Times and White Lines. After all these years, does it feel like nothing has changed?

The only thing that’s really changed is that the crowds are bigger and I can pay my bills on time. … But I’m glad we’ve done it the way we did. I can’t imagine having it any other way. I know too many people who get it handed to them, like they get an opening slot on a tour and they think they’ve got the world by the balls. Well, then all of a sudden the record label shelves their album because maybe it’s not that great, and this artist doesn’t know how to tour on his own because he’s never done it and doesn’t even know how to book a fucking hotel room because they’re used to having everything done for them, and now what? … I know that if it ever gets to the point where I have to go back to doing everything myself, I can do it, because I have done it.

You have the reputation of being an outlaw band, and fans have always loved the songs about drinking, drugging and staying out all night. But you’re not a kid anymore, and in fact you have a son now. Is your approach to that subject matter any different?

Definitely. It’s more of a reflective view than a “This is happening right now” thing. But I don’t think I’m ever gonna settle down to the point of some of these other guys who get old and they don’t allow any beer backstage at their shows, or no one in the band is allowed to smoke any weed before they play. I don’t imagine I’ll ever have that starchy of a shirt, because that’s when shit gets boring. The reputation was well-deserved in the old days, and it still is to some extent. I mean I go out there and a lot of the bigger bands we play with, they’re that way. Meanwhile I’m sitting here drinking three or four whiskeys before I play still, and to me that’s taming it down.

“Honky Tonk Hell” starts off the album, and to me it’s got this epic “Devil Went Down to Georgia” meets “Hotel California” feel. What’s it like to be stuck in a honky-tonk hell?

It’s like that line: “A man can get caught up.” I was caught up for a time, between the drinking and drugging and girls, and it’s almost like this place you keep getting sucked back into every night, whether it’s on the road or not. There’s guys who go to the same bar every night of their lives and they don’t play music or have anything to do with that world, and it’s kind of a take on that.

Anybody who has been to Nashville recently knows that we have a ton of hotels now. But I don’t think many of the tourists or bachelorette parties are familiar with The Fiddler’s Inn. You wrote a song about it, so could you explain for them what that place is like?

Yeah, The Fiddlers Inn is a lot different from most other places in Nashville now. It’s just an old travel lodge with lots of rooms, and it’s over there by the Grand Ole Opry House and the mall, all that shit, but it was there before all that. Just a classic old American roadside motel.

I don’t really know too much about it but I stayed there because me and my buddy Ward Davis were gonna try to write a song. I was staying at this other hotel that was kind of bullshit, so I said “I want to go over to Music City Bar and Grill tonight, because the Music City Playboys are playing” – they’re one of the best fucking bands in town that play on a regular basis. So we were drinking at Music City and already half in the bag, probably more, and we made this plan to write but kept procrastinating all day like “Ah, my notes are kind of empty right now.” We went over there and finally sat down with the guitars, and I just had this idea — “What if we wrote about this exact thing?”

The first line is about a guy sitting in a hotel room and he came here to write, but he can’t think of anything. And then the next verse is about what’s going on down the hall. We could have written a verse for every room because there are a million stories that happen every night at those places. Everybody’s on a different path, everybody’s coming from a different place.

You made your debut at the Ryman Auditorium this past year, and just thinking about where you guys came from, that’s a pretty big honky-tonk. What did it mean for you to be on that stage?

The first time I came to Nashville was probably 20 years ago, and like everybody says, it was a much different town back then. We’d go down and stay for a few days if we were playing a show, and sometimes we’d just go down to hang out because Broadway was still cool back then. There were at least five good bars where you could go hear real country music every day of the week, not just Sunday morning or whatever.

A lot of nights I would get drunk and disappear from the group, and just go sit on those front steps [of the Ryman]. [Playing there] was always something I wanted to happen, and I told myself I would never open for anybody there. I wanted the first time I was on that stage to be because the people were there to see me and my band. … It was an amazing night, and it went by so fast, but I tried to make as many memories as I could. I walked around before the show and just sat in different pews while it was empty just to see the different vantage points, because I had never even been in the building before. I never wanted to go inside until it was my day. I’m happy, but I don’t know if we’ll ever play there again. I’d almost rather just leave it one-and-done, and let that be my memory of the place.

I know your grandfather taught you about music and he meant a lot to you. And I read that he was also a guy who liked a drink at the local honky-tonk, but eventually gave it up. Do you see yourself following in his footsteps?

I mean, I imagine I can’t go on drinking forever if I want to continue putting on decent shows and have at least somewhat decent health. I’m gonna have to stop this shit eventually, but it’s probably not happening any time soon. I’m enjoying the fact I can still drink a bit and keep it together, and I’ve been singing and playing guitar better because I’ve been drinking less, but there are few things that I enjoy more than a good glass of whiskey and hanging out with my buddies. It just turns some shit on in my brain that nothing else turns on.