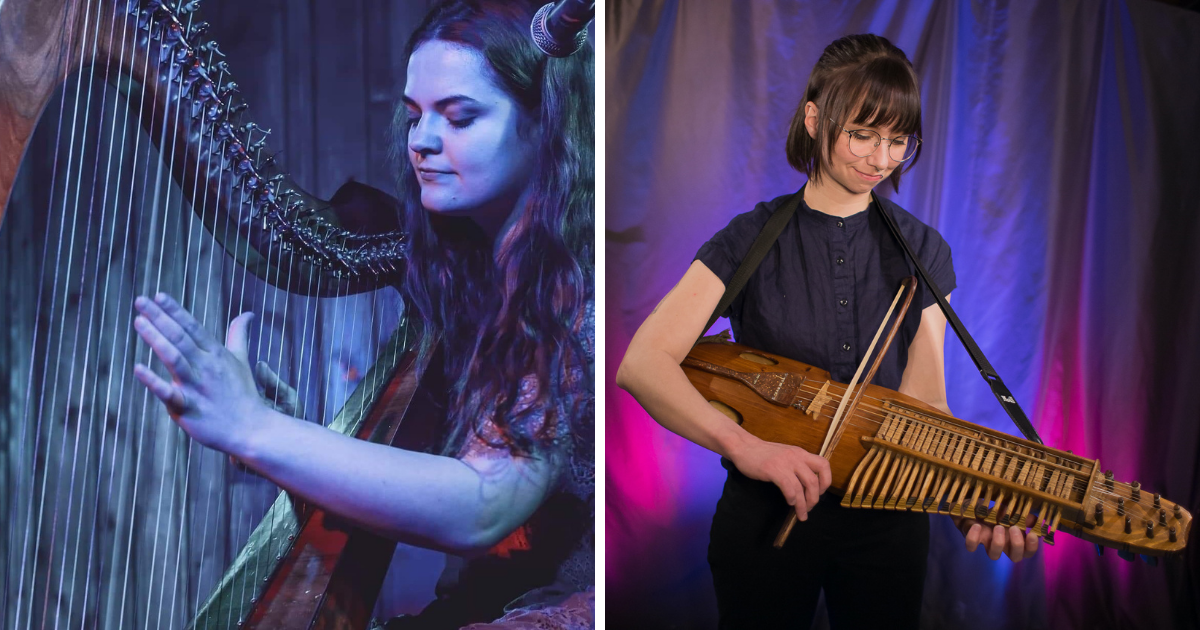 We’re all familiar with the standard bluegrass five-piece band (also a common lineup in old-time or string band music), but there are quite a few second- and third-string instruments — no pun intended — that are rarely invited to join ensembles of guitar, fiddle, upright bass, mandolin, and banjo. Dobro is perhaps first on this short list, but accordion, dulcimer (hammered and mountain), autoharp, washboard, harmonica and dozens of other music and noisemakers could be encountered alongside these acoustic staples.

The five musicians below are awe-inspiringly adept at their instruments, each considered more like afterthoughts or casual embellishments in American roots music, rarely considered centerpieces themselves. But no matter how uncommon they may be at your local jam circle, or around the fire at the campsite, after you’ve been introduced to each of the following, you’ll be craving more unexpected and uncommon sounds in your bluegrass lineups.

From bones to nyckelharpa to Irish harp, here are five uncommon traditional instruments played like you’ve never heard them before:

A familiar, towering figure in the West Coast old-time, folk, and DIY roots music scenes, Simon Chrisman is criminally underappreciated on a national or international level. He most recently released a duo album with acclaimed banjoist Wes Corbett, he has been touring and collaborating with the Jeremy Kittel Band, and he’s performed and recorded with the Bee Eaters, Bruce Molsky, Laurie Lewis, and many others. His hammered dulcimer chops exist on a plane above and beyond even the most accomplished players on the trapezoidal instrument, throwing in pop and bebop-inspired runs, reaching down to bend strings by hand to achieve particular semi-tones, bouncing along at a rate only matched by a three-finger banjo player’s rapid-fire sixteenth notes. It’s jaw-dropping, even in Chrisman’s most simple, tender melodies and compositions. This rollicking number, named for Corbett’s beloved cat, is neither simple nor overtly tender, but your jaw will find the floor nonetheless.

Rowan Corbett is a singer-songwriter, multi-instrumentalist, and percussionist best known for his time with seminal modern Black string band, the Carolina Chocolate Drops. Also a longtime member of Baltimore-based acoustic-grunge/world-folk group ilyAIMY and a veteran of Celtic outfit Tinsmith, Corbett is something of a musical chameleon, though it never feels as if he’s just putting on genre costumes to match whatever melodic motif suits the moment. Instead he inhabits each one authentically and wholly. ilyAIMY, for being billed as a folk band, are captivating, passionate, and energetic, perhaps most of all while Corbett fronts the group. But all of his musical moxie across all of his instruments pales when he pulls out the bones — traditional, handheld percussion instruments similar to their more mainstream (if not more vilified) counterpart, the spoons.

It’s no wonder a bio for Corbett begins, “What are those and how does he do that?” Corbett’s percussion skills are precise and technical, laser-like accuracy meshed with generation-blurring soul. During a guest appearance with Rhiannon Giddens at the North Carolina Museum of Art in Raleigh, North Carolina, in September 2019, Corbett brought thousands of listeners gathered on the hillside by the amphitheatre to their feet with his bones and just a couple of bars. This improv/battle video with Greg Adams displays just a taste of Corbett’s prowess on the ancient instrument.

Pandemic aside, if you’ve jammed with an old-time fiddler in the past two years you’ve probably fumbled (if you’re like this writer) or charmingly tripped your way through a Swedish fiddle tune or two. Musicians like Brittany Haas and Molly Tuttle have brought Swedish tunes into their repertoires, birthing dozens of new acolytes of the crooked, wonky, joyful tunes. Many an American fan of Swedish folk traditions were introduced to them by Väsen, a genre-blending, nearly 30-year-old Swedish folk band adored by multiple generations of American musicians, thanks to their status as a favorite band of everyone’s favorite pickers. (Väsen counts Chris Thile, Mike Marshall, Darol Anger, and others among their most vocal proponents and collaborators.)

Nyckelharpa player and scholar Amy Hakanson was first introduced to the instrument by Väsen as well and in 2014 she took her fascination with the heady, engaging music to the source, to study nyckelharpa with Väsen’s Olov Johansson himself at the Eric Sahlström Institute in Tobo, Sweden. Her approach to the instrument — a traditional Swedish, bowed fiddle-like apparatus played with keys — has a storied, timeless air, even as she carefully places the nyckelharpa in modern contexts. This original, “Spiralpolska,” for instance, utilizes a loop machine, ancient droning and modern droning combined.

The mountain dulcimer is simple and beautiful in its most common use, a gentle, pedalling rhythm section for languid, introspective folk tunes. Counterintuitively much more common in the hallways and hotel rooms of Folk Alliance International’s conference than IBMA’s or SPGBMA’s gatherings, this writer first encountered Kentuckian Sarah Kate Morgan and her melodic-style dulcimer among the many booths of IBMA’s World of Bluegrass exhibit hall. She was holding her own in an impromptu fiddle jam with mandolins, fiddles, banjos — all instruments much more familiar with picking intricate, free flowing hornpipes and hoedowns. But Morgan doesn’t just strum the dulcimer, capitalizing on its resonant sustain and open tuning, she shreds it. Playing a finely-tuned, impeccably intonated instrument with a radiused fretboard, she courageously and daringly dialogues with whomever accompanies her down every bluegrass and old-time rabbit hole she meets. It’s incredible to watch, not only with the understanding that most mountain dulcimers are treated as an aesthetic afterthought, but also knowing that Morgan’s prowess outpaces just about anybody on any instrument. A truly transcendent musician.

Harp keeps coming up lately! And for good reason. No matter the genre label applied, harp is having a moment. We’ve kept up with Alannah Thornburgh for a few years, featuring her work with Alfi as well as across-the-pond collaborations like this one, with mandolinist (and BGS contributor) Tristan Scroggins. Living in Dublin, Thornburgh plays in the Irish harp tradition, but has toured and traveled extensively in the United States, giving her style a distinctly old-time and fiddle-tune-influenced approach. She takes on the complicated, contextual vocabularies of American old-time music with ease, almost leading listeners to believe that emulating the banjo or mandolin or executing new acoustic compositions or modern reharmonizations of old-time classics is what the harp was designed to do.

An Instagram video of Thornburgh displays a mischievous, winking arrangement of Béla Fleck’s “The over Grown Waltz,” from one of his masterworks, The Bluegrass Sessions: Tales from the Acoustic Planet, Vol. 2. An earworm of a tune well-worn and familiar to any acoustic music fan Generation X and younger, it’s not uncommonly called at some jams, but its hummable melody is secretly, deceptively, subversively complicated. Once again, Thornburgh simply smiles and pushes onward, as if reaching and pulling these intricate licks and banjo phrases seemingly out of thin air on a harp were as everyday an activity as brushing one’s teeth — or a wedding performance of Pachelbel’s Canon in D.