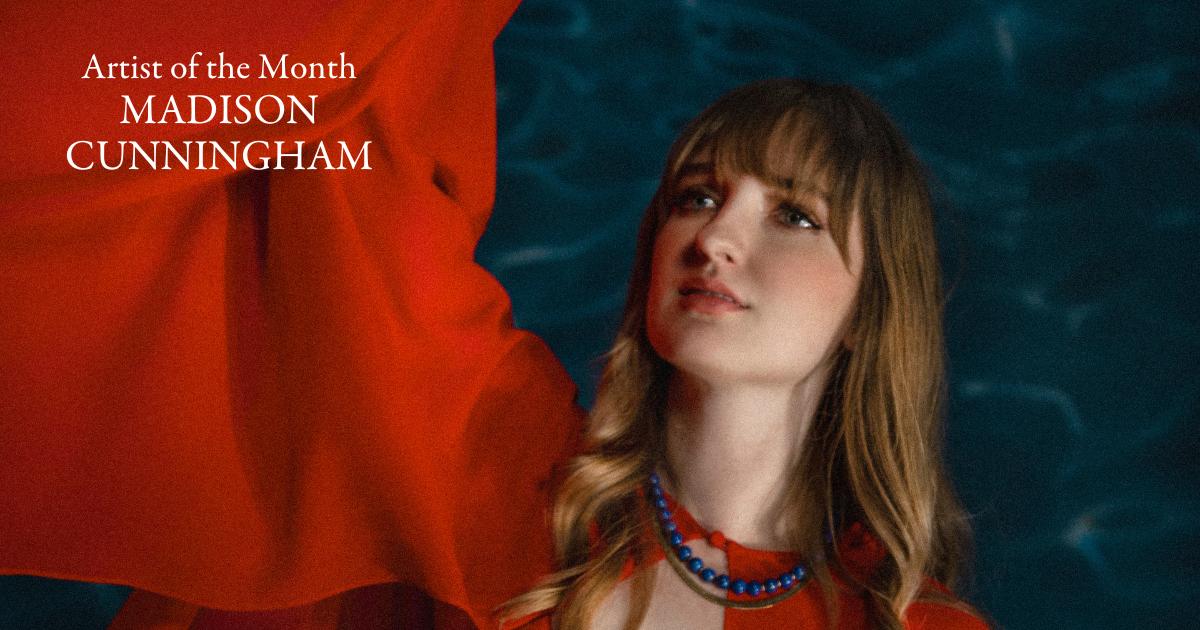 Madison Cunningham isn’t afraid to open up. Her latest album, Revealer, finds the singer-songwriter, well, revealing glimpses into her innermost thoughts, whether she’s musing on the push-pull of big dreams and life on the road in “All I’ve Ever Known” or grappling with mistakes on acclaimed single “Hospital.”

“What’s fun about writing is when you get to the place where you can make yourself laugh, or you’re excited about what’s happening,” she says. Lately, there’s a lot to be excited about. Revealer has earned the 26-year-old California native two Grammy nominations: one under Best Roots Performance for album track “Life According to Raechel,” and one for Best Folk Album. And while she’s long been a regular presence on big stages (BGS fans may recognize her from appearances on Chris Thile’s Live from Here as early as 2017), Cunningham continues to reach new audiences with wide-spanning tour dates and late-night appearances on shows like The Late Late Show, Jimmy Kimmel Live, and The Tonight Show With Jimmy Fallon.

Even when she’s bearing vulnerable parts of herself with deeply confessional lyrics, Cunningham seems like a natural on the stage. But despite a nearly lifelong devotion to songwriting and guitar, sharing her work with the world hasn’t always come easy.

“A lot of my life I felt like, as a performer, I wasn’t fully representing myself because of my nerves,” she admits. Stage fright kept her from performing for much of her adolescence, and the confident singer we see today had to work hard to overcome her own reservations. “I am proud of the live music element to what we accomplished in the last year,” she adds. “I mean, that’s most of what I did in 2022—playing shows. My band and I put a lot of time and effort into making these songs translate to a live setting.”

After playing an even one hundred shows in 2022, Cunningham unlocked a new kind of conviction on stage—one that makes the future for this young talent all the more exciting. “I worked on things that I felt like I got better at—stage presence and engaging with an audience—and my voice sounded comfortable,” she says. “I’ve always been very hard on myself for those things, and this time I felt like I broke through some barriers.”

BGS caught up with Cunningham, our BGS Artist of the Month for January, about her musical upbringing, her broad definition of folk music, and the careful balance between believing in yourself and inviting others on your creative journey—both in the studio and on the stage.

BGS: What are your first memories with music?

Cunningham: Apparently, as a kid I really wanted to play guitar at around 4 years old. I didn’t actually start playing until I was 7 and that’s when I can remember falling in love with the guitar. My dad would teach me all the chords that he knew at the pace that I was able to keep up. And then, it grew. I started taking piano lessons but I just kept getting drawn back to guitar. Those are probably my earliest memories, my dad playing and me wanting to be able to join in with him.

How did that evolve into a career as a performer?

It took a long time because I was really shy. I had a terrible case of stage fright, starting when I was a kid. Even though there was a love for it that was brewing behind the scenes, I never pictured myself doing it in front of people. So, that took a really, really long time for me to get over. I was probably 12 when I started really singing from the stage, but there was a whole new phase when I started playing my own music; I was deathly afraid to play it in front of people. I was 17 or 18 when I started to work through that and get over it. All I really knew is I loved writing songs.

You’ve been writing songs for a long time, but you’ve also found new fans through the covers you released during the height of the pandemic. What value did you find in recording music from other artists and songwriters?

It broke down certain barriers that I had for myself as a songwriter. That’s what’s so important about keeping your mind and your heart open to music that challenges you and inspires you. It opens up new ways for you to express yourself and new ways of playing and thinking about music. That’s what those covers were for me: They were linchpin artists who taught me about what it was that I loved about music. Being able to actually step inside of those songs and play them for myself taught me more about what I loved about songwriting in general, and how I wanted my songs to live on beyond myself and the moment in which they were created.

“All I’ve Ever Known” is the first song on the album, and you’ve said it was the first one you wrote for the album. How did the production come together?

That’s the one song on the album where I played everything. But initially the concept of the record was to do that for every song. Things changed; I didn’t want to be stuck in my own echo chamber of ideas and I wanted someone else to bring their unexpected artistry to this. But for whatever reason, with that song, I kept trying to redo it and invite some of my favorite musicians on it, but it just kept pulling the song in a direction that was not how it started and not where it was supposed to end. I think things should always be able to be redirected, and I’m a huge fan of course-correcting, but it felt like the spirit of the song lived in this version that was created by me. So, I left it. I added the production elements that I felt would elevate it. I’d let it sit for a little bit. At one point, I’d added too much and had to go back and turn some things off. [Laughs] But the production of that song was really just an element of me following my curiosity and having the most fun doing it.

You’re nominated for Best Roots Performance for “Life According to Raechel.” But you’ve said that you were actually deeply afraid to record that song. Why?

I was afraid that I was going to complicate it—not be brave enough to let it be the simplistic song that it was. I had recorded a version of it at home that was very much a demo, and we were going to enhance the quality and redo it and add strings. To find the balance between sincerity and theater can be really difficult, but I felt like the song needed both. Tyler Chester, who produced that song, never let me try to get too impressive with it. He kind of slapped my hand if I wanted to add something that was too frivolous or add anything that took away or pulled against the narrative of the song. A song like that is so personal. I was afraid that I would saturate it with sappiness. It was kind of on this tightrope.

The song is about losing your grandmother. Is there anything you wish she could witness about your journey since you wrote it?

I think everybody’s biggest fear, when you think about death and when you think about leaving, is feeling like nobody’s going to care, or that people will soon forget, or that everything that you worked for in your life is a loss. I would love her to see that a story about her in a song has seemingly helped other people through their own versions of grief. I think that would’ve been an impactful thing for her to see—maybe even a bit of closure. Who knows? I don’t know where she is now. Does she even need closure in any way? I don’t know. These are all questions that none of us could ever have the real answers to. But I find it fascinating that death is such a universal reality, but still it’s this massive mystery.

Revealer is nominated for Best Folk Album, but it’s clear that your music is influenced by so much more than just one genre. What elements of folk do you feel have most influenced your music?

Folk music is at the heart of the way we view songwriting today. Folk, to me, is almost just another word for singer-songwriter. The great mothers and fathers of folk like Joni Mitchell, Bob Dylan… all of those people brought to the table some real lyrical awakening. They put so much of themselves into the songs. The veil between their emotions and their lyrics was completely translucent. The melody component in folk, too, is incredibly inspiring to me. But folk is just a small word for a very, very large genre packed with so many different ideas. And people have taken it in so many different directions. I’ve been excited about a lot of it.

You struggled with stage fright in the beginning. If you could go back and tell yourself one thing, what would it be?

Probably to not worry so much about the rules around music, or the rules that people set in place. But sometimes, I would like her to come and give me advice, because there was so much less that I was thinking about back then. So much comes into play as you get older, as you’re more aware of the way that life works. I feel like the sort of oblivion, the ignorance that I got to live in at that time was so good for art.