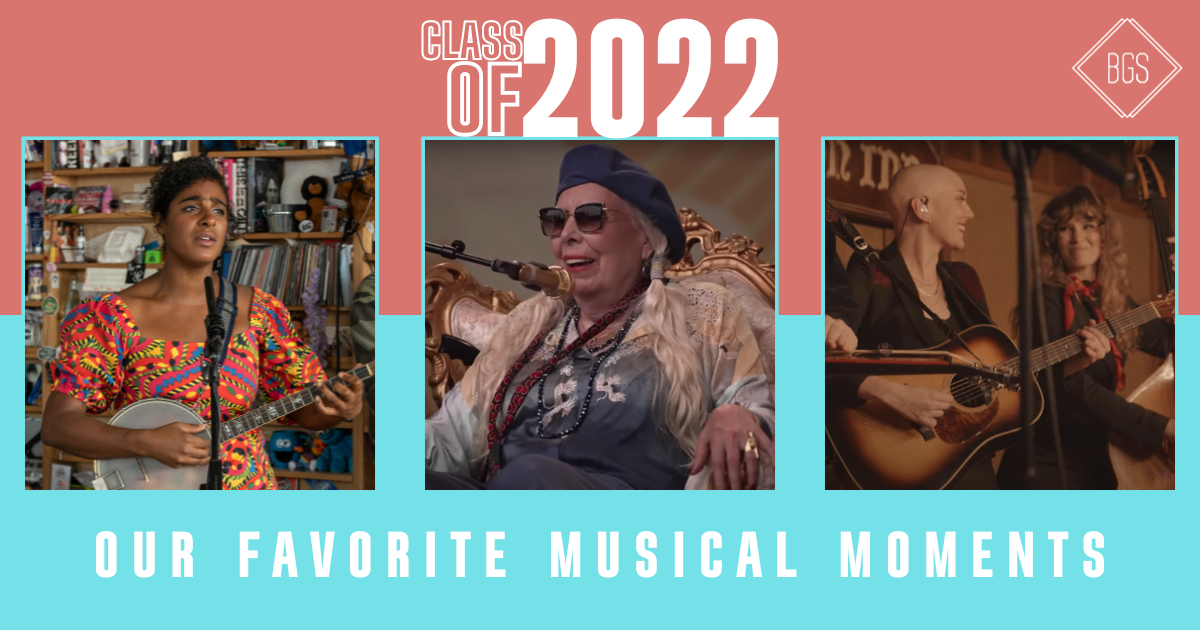 Whether you’ve been following the Bluegrass Situation for 10 years or 10 days, you’ve likely noticed that we cover more than bluegrass. That’s especially evident in our BGS Class of 2022, a retrospective written by our contributors that includes numerous familiar faces, a couple of superstars, and even a few surprises. (And you can probably tell that we’re fans of live music.) Here are our favorite moments of 2022, listed alphabetically and enthusiastically.

For banjo lovers, 2022 offered an array of styles and inspirations. Jake Blount explored Afrofuturism on The New Faith, while Caamp’s Evan Westfall channeled his Ralph Stanley influences into the Americana-leaning album Lavender Days. Pharis & Jason Romero embraced a folk sound in “Cannot Change It All,” Tray Wellington indulged his interest in jazz on Black Banjo, and Leyla McCalla related her Haitian heritage in songs like “Fort Dimanche.” Could banjos be the great unifier? — Craig Shelburne

With its bounding cartoon mouth harp and Adrienne Lenker’s hound dog howl, this standout on Big Thief’s double album, is a goof on Americana tropes, a funny embrace of the kookier sides of early Dylan or maybe Country Joe & the Fish. The song’s odd climax is the bemused realization that you can’t kiss your own elbows: “They’re on their own!” Lenker declares. How the band manages to pivot from such silliness to a genuinely moving existential query is a cosmic bit of choreography. — Stephen Deusner

Forty years ago I wrote a review of Big Al Downing’s LP on the Team label for the Bridgeport Post-Telegram (today the Connecticut Post). I got two letters — one from (I presume) a white man saying, “N-words don’t sing country music. Why did they print your crap?” The other came from a Black guy saying, “You’re a great writer. Write about OUR MUSIC.” I know he’d be thrilled at the presence of so many Blacks in country today, and at videos like Jimmie Allen’s poignant ‘Down Home.’ It’s about life, love, country things and every bit as much about Black life as any ghetto saga or rap chronicle. Seeing it always makes me happy and seeing him and other Black stars excel in country reaffirms it is AMERICAN music, period. — Ron Wynn

If this year gave us one thing to be especially grateful for, it was the return of Kate Bush, whose 1986 earworm “Running Up That Hill” was inescapable following its prominent inclusion in Season 4 of Stranger Things. Suddenly Kate was almost everywhere (though to some of us she never really went anywhere but I digress…). Even my 16-year-old niece suddenly knew about “Cloudbusting” and “Wuthering Heights,” to my great joy. But Kate wasn’t the only Bush to make an impact in 2022. A more familiar face to BGS fans, the Sam variety of Bush released a beautifully personal tribute, titled Radio John, for his friend and musical icon John Hartford. While the Bushes’ music couldn’t be more diametrically opposed, the “Bushaissance” was a welcome reminder that some of our most legendary artists continue to be as prolific and relevant as ever. — Amy Reitnouer Jacobs

This March 15 show began as a statement of where Mike Campbell is going and ended with a celebration of where he’s been. It was a cathartic night of mourning Tom Petty’s death and celebrating that his brand of literate rock lives on through Campbell’s music vision. It was exhilaratingly joyful. Bonus: Margo Price bashing away on drums behind husband and opening act, melodic songwriter Jeremy Ivey. — Jim Patterson

When Cimafunk taped his Austin City Limits debut in May, it was like watching the spirits of James Brown and Prince explode into an Afro-Cuban soul-funk supernova. The moves, the grooves, the seductive way rhythms rippled through his body … the language barrier simply melted away, replaced by pure, infectious energy. From gorgeous balladry to syncopated deliciousness, Cimafunk & the Tribe, his eight-piece, jazz-influenced band, left me crushing hard — and dancing out the door. — Lynne Margolis

The first second line parade… the first blaring brass band … the first Cajun waltz… the first bite of a cochon de lait po’ boy… New Orleans’ JazzFest was back after three looooong years! The “headliners”? Who cares? The stuff you can’t get anywhere else was what we missed. DahkaBrakha from war-torn Ukraine, their traditional towering hats against a backdrop of the words “Won’t Bow Down,” the defiant credo of New Orleans’ Black Masking Indians? Yeah you right. — Steve Hochman

After flash flooding decimated Eastern Kentucky in early August, Chris Stapleton organized a relief concert at Lexington’s Rupp Arena on Oct. 11 that included Kentucky all-stars Tyler Childers and Dwight Yoakam. The show’s highlight came during a star-studded finale that saw Eastern Kentucky musical paragons Ricky Skaggs and Patty Loveless join others for a rendition of John Prine’s “Paradise.” The surprise moment was a powerful reminder of how, even in the darkest of times, music has the power to lift spirits. — Matt Wickstrom

After a 2015 aneurysm left Joni Mitchell having to relearn how to walk and sing, her performing days seemed over. But she had a comeback for the ages at this past July’s Newport Folk Festival, with help from Brandi Carlile and friends. Mitchell’s first full set in 23 years was an unequivocal triumph, especially the penultimate “Both Sides Now” – which had everyone there openly weeping. The moment of redemptive healing we didn’t know we needed. — David Menconi

Plains, I Walked With You a Ways

Waxahatchee’s Katie Crutchfield and Jess Williamson teamed up to form Plains this year, and Williamson may have written the perfect millennial country song for the project (though, as country music tends to do, it’ll resonate with any generation.) “Abilene” reluctantly talks of dreams that once were — now abandoned, for one reason or another. With white picket fences being harder than ever to reach these days, “Abilene” might leave my fellow millennials crying into their avocado toast, but immediately swept back up by this wholly incredible and refreshing album. — Shelby Williamson

Before November, Caitlin Rose hadn’t released an album since 2013 — and still managed to be a “top-played” artist for me every year. CAZIMI perfectly encapsulates why: Her hummable melodies, expertly balanced instrumental twang, and smart lyrical candor make every song feel like a confessional with your wittiest friend. From the forward-looking harmonies of “Getting It Right” to the vulnerable, clear-voiced “Blameless,” CAZIMI is yet another Rose stunner I’ll be spinning for decades to come. — Dacey Orr Sivewright

Sam Shackleton on Gems on VHS

A top musical moment for me this year was watching Scottish musician and folklorist Sam Shackleton on GemsOnVHS’ YouTube channel, performing the classic song “House Carpenter” from Arthur’s Seat which overlooks his hometown of Edinburgh. I love how Shackleton’s spirited busker style puts him at ease anywhere, solo or in a crowded pub jam. His richly accented singing voice and his unpretentious banjo style shine through in this video. — Lindsey Terrell

So, how’s this for a storyline? The singer finds out not only that her boyfriend is a two-timing creep, but also that he’s married to her friend Diane. And in this female take on the cheating story, knowing she has betrayed a friend is what hurts most. After a sweet acapella intro, a banjo backup tells you to strap in — the bluegrass is about to take off. Great story, great vocals, great drive. – Claire Levine

For my musical moment of 2022, I didn’t have to go too far back. At this year’s CMA Awards, Chris Stapleton and Patty Loveless joined forces on a Darrell Scott classic, a gut-wrenching song about the hardship of living in the coal country of Eastern Kentucky. I performed this song a few times in my day and it still makes me shiver when I hear the hook: “You’ll Never Leave Harlan Alive.” — Jonny Therrien

Town Mountain, “Lines in the Levee”

With its first album on New West Records, Lines in the Levee, Town Mountain has broken into a new, exciting level. Based in Asheville, North Carolina, this Americana/bluegrass act is a high-octane, live-wire presence on stage. And, with this latest record, the group dug deep into its lyrical wellspring, commenting on the state of affairs in America — a melodic voice of reason amid uncertain times. In truth, after 17 years together, the band is only getting more raucous and riled up. “Lines in the Levee” has already become a staple in the concert realm. — Garret K. Woodward

Molly Tuttle’s “Crooked Tree” is a testament to finding strength in otherness. It’s a track that leans into traditional aesthetics while oozing Tuttle’s personality, worldview, and musical ethos — which remind of second-generation bluegrass trail blazers like Laurie Lewis and Lynn Morris. The confidence, vigor, and panache Tuttle has built with Golden Highway and on Crooked Tree are striking and widely resonant; in November, she received two Grammy nominations: Best New Artist and Best Bluegrass Album. — Justin Hiltner

I cheered about everything that went into Watkins Family Hour’s Vol. II. Not to downplay the 20-year milestone of Sean and Sara Watkins’ collaborative project but their third LP being devoted to just that, collaboration, felt like a burst of sunshine against lockdown’s darkness. Each song sounds so full of human individuality — of life. Rather than listening to a recording, I feel like I’ve walked into Largo for Watkins Family Hour’s next live show. — Kira Grunenberg